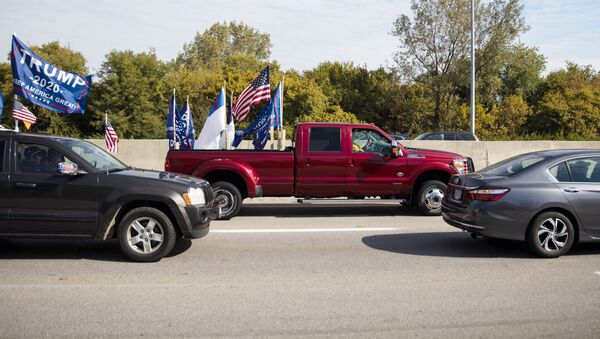 Asya Geydarova
Editor
All materialsWrite to the author
Police assume that the suspect, which is still on the loose, was one of the rally's participants. No one has been injured as a result of the incident, according to the authorities.

Police are searching for a man who opened fire at a car parade in support of President Donald Trump in Hilliard, Ohio, NBC 4 reported on Saturday.

The suspect reportedly fired from his car at another vehicle along I-270, a 911 caller reported. Based on the information provided by witnesses, police are now looking for a black pickup with an American flag and Trump US Marines stickers placed on it.

There was a Trump parade on I-270 today. Big trucks with Trump flags. One of them shot at a car. Hilliard Police confirm they are looking for a suspect involved in a shooting at a pro-Donald Trump parade.

The shooting took place at approximately 10.40 am on Saturday, Hillard Police's Public Information Officer Andrea Litchfield said. She did not provide any more details, apart from that nobody was wounded in the incident.

"That is something we are absolutely looking into", Litchfield told Fox News.

Please use caution on 270 east bound just west of Sawmill. Emergency vehicles are on the scene of a traffic incident. Please use caution in that area and be advised of slow traffic and emergency personnel on scene.