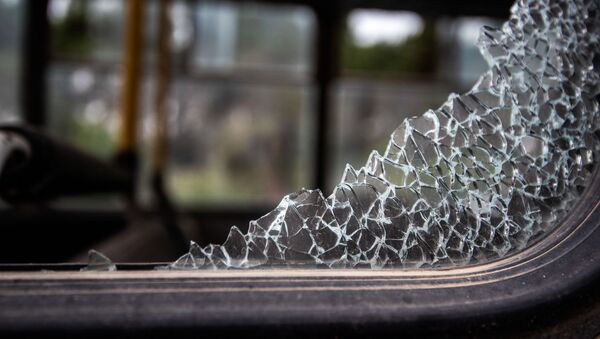 The hostilities in Azerbaijan’s Armenian-dominated breakaway region of Nagorno-Karabakh (known as Artsakh in Armenian) erupted on Sunday when both parties accused each other of violating the ceasefire.

President of the self-proclaimed Republic of Artsakh, Arayik Harutyunyan, said on Saturday that he was going to the frontline with the special forces.

YEREVAN (Sputnik) - President of the unrecognized Republic of Artsakh (Republic of Nagorno-Karabakh) Arayik Harutyunyan says the republic’s troops have improved their positions after heavy fighting on Saturday.

"After heavy fighting, the defense forces improved their positions today, laying ground for further advances," Harutyunyan wrote on Facebook, adding that he remains on the front lines.

YEREVAN (Sputnik) - A delegation headed by President of Armenia’s National Assembly Ararat Mirzoyan has departed on an urgent visit to the unrecognized Republic of Artsakh (Republic of Nagorno-Karabakh), the assembly’s press service informed in a statement.

"Within the framework of the visit [to the unrecognized Republic of Nagorno-Karabak] Mirzoyan held separate talks with his colleague from Artsakh, Arthur Tovmasyan, later the talks continued in an extended format," the Saturday statement says.

According to the release, Armenian and Nagorno-Karabakh lawmakers exchanged information on the "military, political and diplomatic situation."

"Today, the Azerbaijani army liberated the villages of Talish in Terter region, Mehdili, Chakhirli, Ashaga-Maralyan, Shaybey and Quycaq in Jabrayil region, and Ashaga-Abdurakhmanly in Fuzuli region," Aliyev wrote on Twitter.

STEPANAKERT (Sputnik) - Several explosions have been heard in Stepanakert, the capital of the unrecognised republic of Nagorno-Karabakh, a Sputnik correspondent reported from the scene on Saturday.

It is yet unclear which facilities have been targeted.

According to the foreign ministry of the breakaway region, "Azerbaijani forces are shelling Stepanakert."

STEPANAKERT (Sputnik) - The unrecognised Nagorno-Karabakh Republic has not received a proposal from Azerbaijan on a temporary truce, Foreign Minister Masis Mayilyan said Saturday.

"As for the temporary truce, we have not received such a proposal", Mayilyan said at a briefing.

On Tuesday, Armenian Defense Ministry Spokeswoman Shushan Stepanyan said a Turkish F-16 shot down an Armenian Su-25 over the country’s airspace which resulted in the death of the pilot.

In a one-on-one interview with Al Jazeera published Saturday, Aliyev was asked about the degree of Turkish involvement in the fighting between Azerbaijan and Armenia in the disputed Nagorno-Karabakh.

“We feel the support - we are very grateful to our Turkish brothers and President [Recep Tayyip Erdogan] and other officials. But Turkey is in no other way involved in the conflict. One of the Armenian fake news that is now no longer in the media is that Turkish F-16 shot down Armenian Su-25. This is fake news. Where are the proofs?” Aliyev said.

Aliyev said that all movements of the planes are logged by radar and computers, meaning the accusing side can swiftly produce the evidence.

MOSCOW (Sputnik) - As many as 1,000 Syrians who have been deployed along the line of contact in Nagorno-Karabakh amid a flare-up in tensions in the disputed region are working for a Turkish private security firm, the UK newspaper The Guardian reports, citing several of the deployed Syrian security personnel.

According to the newspaper, 1,000 Syrian men were offered 10,000 Turkish lira ($1,286) a month to work for a private Turkish security firm. The Syrian personnel took a military flight to Azerbaijan before travelling to Nagorno-Karabakh, the newspaper said.

"I was hesitant to come here at the beginning because I had no idea about this country and I don’t speak the language. I knew there were skirmishes between the two countries, but I didn’t know that I was coming to war. I thought it was just guard work", one of the Syrian security personnel, whose real name was withheld, told the newspaper.

The individual said that he was stationed at a point along the line of contact that has been under sustained fire since the clashes broke out on Sunday.

Many of the deployed Syrians, who typically wear blue uniforms similar to Azerbaijani border guards, are believed to have thought that they were being offered work to guard oil and gas facilities in Azerbaijan, the newspaper stated.

In a comment to Sputnik on 1 October, the vice president of the security and intelligence committee in the Turkish parliament, Mehmet Altay, denied accusations that Syrian mercenaries had been sent to the region to fight alongside Azerbaijani troops.

The Russian Foreign Ministry has called on all sides in the conflict to observe a ceasefire and begin negotiations.

"When there is aggression, the first task is to protect the population from aggression. After which only it will be possible to talk about negotiations. In the situation when there is large-scale aggression, I can say with confidence that the people of Karabakh will not retreat in the face of the aggression", Pashinyan wrote on Facebook as a caption for his interview with Al Jazeera broadcaster.

“Azerbaijan is firing at civilians with cluster munitions from the LAR-160 multiple launch rocket system,” Hovhannisyan said in a post on Facebook with photographs of what he claims is shrapnel from detonated munitions.

Earlier in the week, Armenia recalled its ambassador to Israel over the latter’s supply of Azerbaijan with ultra-modern weapons.

Cluster munitions are internationally prohibited, although neither Armenia, nor Azerbaijan or Israel are party to the Convention on Cluster Munitions which makes the ban on the production and use of the weapon system legally binding.

Fighting broke out between Armenia and Azerbaijan on Sunday, with the two sides accusing each other of initiating attacks against civilian population points in Nagorno-Karabakh.

The Armenian Defence Ministry urged the media on Saturday to stop broadcasting the Nagorno-Karabakh events live, citing risks to the military operations and civilian lives.

"Despite our numerous calls, there are still cases of media representatives covering events live both on the contact line, areas where the hostilities are taking place, and in the settlements of Artsakh [Nagorno-Karabakh], including its capital — Stepanakert," the ministry said in a statement.

According to Yerevan, live coverage is a direct threat to the Armenian army and civilians.

"This jeopardizes the actions of the Armenian units, adjusting the enemy's fire, and helps to target the civilian population," the statement read.

Not a single Azerbaijani Air Force jet has been downed during the ongoing escalation in the breakaway Nagorno-Karabakh region, the Defence Ministry said on Saturday, refuting Armenia’s statements to the contrary.

Earlier in the day, the Armenian Defence Ministry reported that three Azerbaijani jets were shot down in the region in the morning.

"By spreading false information about Azerbaijan's losses, representatives of the Armenian Defense Ministry are trying to fill their information void about the fighting," the official stated.

"They [Armenia] are recruiting people from the Middle East, and we have evidence that they are not only of Armenian origin. By the way, it does not make any difference whether they are of Armenian origin or not. If someone arrives as a mercenary to fight, it needs to be dealt with at an international level … We already have some intelligence, including videos on the Internet. People from the Middle East, sitting with Armenian soldiers, in the uniform of the Armenian armed forces, they have the flag of Armenia, they are holding talks with them. They should be held responsible for this," Aliyev said in an interview, published by his press service.

According to the Azerbaijani leader, the Nagorno-Karabakh conflict "must be resolved now," as Baku cannot wait for "another 30 years."

The sounds of shelling can be heard again in the city center of Stepanakert, the capital of the breakaway republic of Nagorno-Karabakh, a Sputnik correspondent reported on Saturday morning.

The sounds of explosions are coming from the city outskirts or from its suburbs. No more details are available so far.

Meanwhile, according to the unrecognized republic's Ministry of Foreign Affairs, the shelling in Stepanakert is still underway.

"The Azerbaijani armed forces began shelling Stepanakert. The shelling is still ongoing. There are wounded people. One of the shells exploded near the city center, only two explosions were heard so far," the ministry wrote on Telegram.

Three Azerbaijani jets were shot down in Nagorno-Karabakh on Saturday morning as fierce fighting continues in the conflict-torn region, the Armenian Defenсe Ministry reported.

"At around 08:25 [4:25 GMT] an enemy aircraft was hit in the southern direction," spokeswoman Shushan Stepanyan wrote on Facebook.

At approximately 08:46 a.m., two more jets were "hit on the front line of the [Nagorno-Karabakh] Defenсe Army," she added later.

Fierce and persistent fighting is, meanwhile, ongoing to the north and south of the contact line, according to the ministry.

"The enemy concentrated large forces on these flanks and launched an offensive. Armenian units are suppressing the enemy's advance and inflicting heavy losses on it," Stepanyan said.

French President Emmanuel Macron has called his Azerbaijani counterpart, Ilham Aliyev, urging him to cease hostilities in the breakaway republic of Nagorno-Karabakh and to resume the peace talks.

"On 2 October 2, French President Emmanuel Macron called Azerbaijani President Ilham Aliyev. The French President expressed concerns over the ongoing hostilities on the Armenian-Azerbaijani contact line and called for a prompt return to the ceasefire and negotiations," Aliyev's office told Sputnik on Saturday.

The presidential press service added that the Azerbaijani leader informed Macron of casualties among the civilians.

"President Ilham Aliyev said that as a result of the heavy artillery shelling of Azerbaijani settlements by the Armenian armed forces, 19 Azerbaijani civilians were killed, more than 60 people were injured, and hundreds of houses were destroyed," the office said.

"According to the head of the republic, the Azerbaijani army conducted successful counter-offensive operations and liberated part of the occupied territories. The head of state also noted that Armenia had taken steps to undermine the negotiation process," the press service noted.