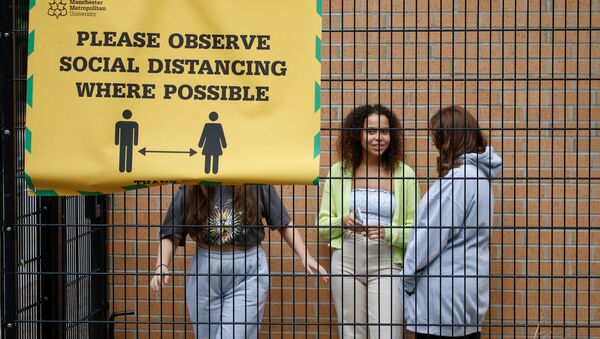 As young people from different corners of the United Kingdom, as well as from abroad, descended on university towns across the country, clusters of the coronavirus disease were identified in student halls of residence, sending them into lockdown.

At Manchester Metropolitan University, as many as 1,500 students were told on Friday that they would be required to self-isolate in their halls of residence for two weeks after 127 positive tests for the coronavirus disease were confirmed in the accommodation facility. The Manchester Evening News daily has since said that a further 10 cases were identified.

The 2019/20 academic year was highly disrupted as COVID-19 began to spread across the globe this past spring. Students were sent home, all teaching was moved online, and final exams were canceled.

As the UK’s daily rate of new COVID-19 cases fell from a record 7,860 in early April to less than 1,000 in July and early August, universities looked to resume face-to-face teaching and told students that their attendance would be required.

Since then, the number of positive tests for the coronavirus disease in the UK has surged, with the Department of Health and Social Care confirming 6,914 new cases on Thursday. An analysis by the New Statesman magazine found that student neighborhoods in England are reporting proportionally more new cases than non-student areas. 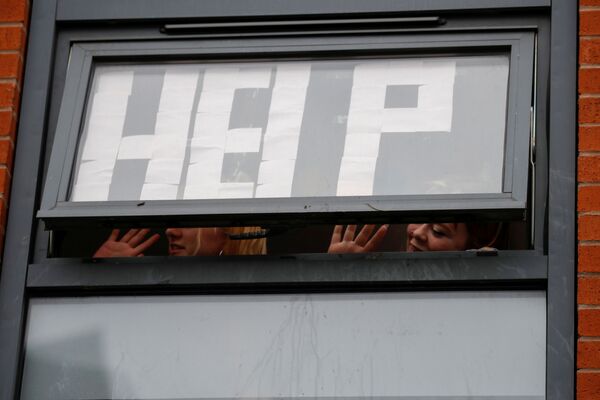 Students wave through the window of a student accommodation building with a sign displayed in it, following the outbreak of the coronavirus disease (COVID-19) in Manchester, Britain, September 28, 2020
© REUTERS / PHIL NOBLE

At least 865 positive tests for the coronavirus disease have been identified at higher education institutions in the UK, the Sky News broadcaster said on Tuesday, adding that 172 of these were registered at Glasgow University in Scotland.

Amid the rapid rise in cases, a data aggregation portal named UniCovidUK has been established, and the founders claim to have identified outbreaks of the disease at 64 universities across the entire United Kingdom as of Thursday afternoon.

Earlier in the month, ministers warned that students at universities may not be allowed to travel home to their families for the Christmas vacation given the ongoing epidemiological crisis. Following student outcry, the government has said that it will do everything in its power to ensure that students can celebrate the holiday season at home.

Over the past weekend, UK media outlets published photographs and videos from the quarantined Manchester Metropolitan University halls of residence. Students had hung banners in their windows displaying requests for food and derogatory messages towards the government.

The university later announced that all students who were quarantining would receive a two-week rent rebate, a supermarket voucher worth 50 pounds ($64.25), and free toiletries and cleaning supplies.

Other institutions have also been checking in on students to make sure that they have everything they need, Nick Hillman, the director of the Higher Education Policy Institute (HEPI) told Sputnik.

"I think increasingly we're seeing universities make sure students that are self-isolating are getting the support they need, and that might be food, that might be mental health support, it might be someone just checking in on them making sure they're OK, making sure they've got toiletries and other things we all need to live our daily lives," Hillman said.

According to the HEPI director, the actual proportion of students who are currently being required to self-isolate is small.

"There's well over a million students in student accommodation and these outbreaks and these lockdowns of halls of residence are painful, but they are only affecting a very small proportion of the student body," Hillman remarked.

Students at some universities have said that the assistance provided has not been sufficient. On Tuesday, students at a quarantined accommodation block at the University of Edinburgh told the Edinburgh Evening News daily that food often is not delivered until the afternoon, and some Muslim students have complained about receiving meals not suited to their dietary requirements. 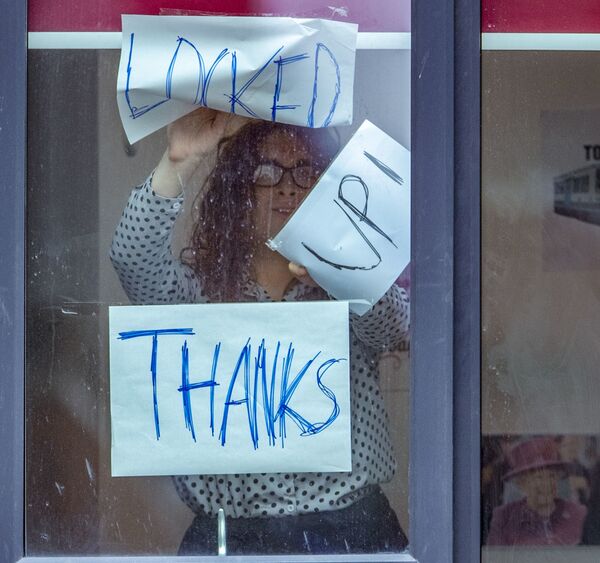 The National Union of Students (NUS), the UK-wide representative body for students, has called on universities to ensure that all those who have been required to self-isolate are given food supplies, adding that the current situation is raising anxiety among those who have left home.

"Many students have left home for the first time and are living with strangers in unfamiliar surroundings. To be trapped in their accommodation without the opportunity to return to their families if they wish will only add anxiety to an already difficult situation. All universities where lockdowns occur must ensure that students are supporting with deliveries of food and basic amenities and access to mental health services," Larissa Kennedy, the president of the NUS, said in a written statement to Sputnik.

UK-based students are entitled, by consumer law, to receive a refund if their university fails to provide the education that they have paid for. For home students, UK higher education institutions can charge up to 9,250 pounds ($11,870) per year for tuition, with non-EU students paying well in excess of this figure.

Members of the University and College Union, the leading trade union for UK-based academic staff, have held multiple strikes over the last three years in protest against pension reforms, pay, casualization, and inequality. The disruption prompted many students to demand a refund, either in full or in part, of their tuition fees, and The Independent newspaper reported this past March that universities have paid out a total of 2.9 million pounds ($3.7 million) divided among nearly 20,000 students following the industrial action.

With face-to-face learning and in-person classes being major casualties of the current pandemic, students have raised issue with paying full tuition fees and honoring their rental accommodation contracts.

"Student finances have taken a real hit over the past few months and the government must step in so that they are not further penalised by its disastrous mishandling of the pandemic," the NUS president remarked.

Students should be able to receive reimbursement if their quality of learning is disrupted by the ongoing coronavirus disease pandemic, Kennedy added.

"If their quality of learning is severely impacted then we also need to see tuition fees reimbursed," the NUS president said.

According to HEPI Director Nick Hillman, universities are being asked to do more to support students at the present time, adding that resources could be scaled back if they are required to reimburse students.

"Actually, universities are actually being asked to do more, not less. So they're being asked to provide more support to students, not less … And obviously, everything you do, both teaching and non-educational support … costs money. If universities have less money, then universities will be able to do less for their students," Hillman said.

Any tuition fee refunds would, therefore, likely come from the government, although Hillman said he believed that ministers had more pressing priorities amid the ongoing health crisis.

"I think the government's got even more urgent priorities for using its money but there are ways to give money back to students without actually pushing universities to the financial brink," the HEPI director remarked.

Several of the outbreaks at UK universities have been linked to large-scale parties that have been held at private residences. The country’s nightclubs have been closed since March, and a new pub and bar curfew of 22:00 (21:00 GMT) was introduced in late September as the country’s case total began to rise.

According to the Manchester Evening News daily, the lockdown at Manchester Metropolitan University came just days after a 100-strong party took place in the courtyard of one of the now-quarantined halls of residence on September 16.

Students at Coventry University also flouted social distancing guidelines to hold a party containing an estimated 200 people earlier this week, according to the BBC broadcaster.

In a statement published on Wednesday, the Coventry University Students’ Union urged attendees to observe the government’s social distancing guidelines, adding that students may face disciplinary or even criminal proceedings should the rules be continually broken.

According to HEPI Director Nick Hillman, it was "regrettable" that students at certain universities chose to flout the rules and hold parties.

"I think it's very regrettable that some students have broken the rules and had big parties of hundreds of students, because I think that puts other students at risk, certainly of self-isolation and probably a risk of catching the virus. I think that's regrettable and I think that we'll see less of that now that people realize this thing hits students just like it affects people of other ages and demographics," Hillman commented.

Despite the fact that parties have been held at universities, NUS President Larissa Kennedy said that students have done all that the government has asked of them.

"Students have done everything they have been asked to do during this pandemic and have returned to university campuses in accordance with government advice. Much like in the wider population there will always be a small minority of people who might not follow the rules, but universities and colleges already have existing procedures in place to deal with this," Kennedy said.

Additionally, the NUS president said that it would be potentially unlawful for the UK government to introduce greater restrictions on students to stop them from socializing.

"It is completely unacceptable – and potentially unlawful – for students to be subject to different rules than everyone else. This will only make public health guidance even more confusing and harder to follow," Kennedy said.

As the coronavirus disease continues to spread throughout higher education institutions, certain universities have already begun setting up on-campus testing facilities for students and staff.

On Tuesday, the Sussex University Students’ Union announced that a mobile testing unit will be placed on campus from next week, adding that it will have capacity for up to 400 tests per day. Dozens of other universities have also made similar announcements.

According to Kennedy, an extensive contact tracing system must also be established by the government to track outbreaks on university campuses.

"We also need them to get a functional test and trace system in place on campuses and adequate funding to tackle the student mental health crisis," the NUS president said.

Speaking in parliament on Thursday, the UK’s health secretary Matt Hancock announced the implementation of tougher social distancing measures in several English cities and the BBC reported that ministers will create a new three-tiered local lockdown system in England amid the surge in new cases.

The new measures include a ban on any indoor mixing between different households in areas that have a high rate of new coronavirus disease cases.

It remains to be seen how these measures will be enforced within university halls of residence, which bring hundreds of people together in close contact.