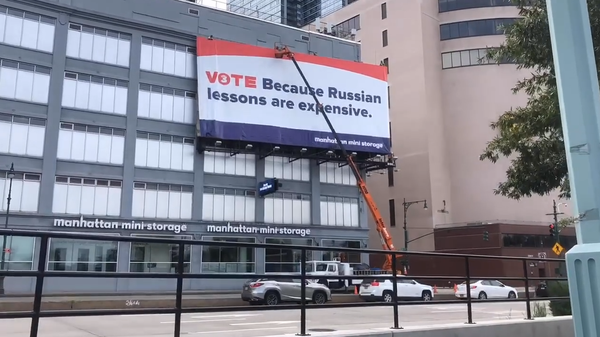 Ilya Tsukanov
All materialsWrite to the author
In late August, Manhattan Mini Storage, a New York City-based self-storage and moving company, put up a sign outside one of its locations urging New Yorkers to vote in the upcoming presidential election with a tongue-in-cheek message referring to the (long-debunked) ‘Trump Russia collusion’ claims made by Democrats after 2016.

The Congress of Russian Americans (CRA), a San Francisco-based NGO with the mission of preserving and promoting Russian culture, language and spiritual heritage and combatting Russophobia, has asked Manhattan Mini Storage to remove a "provocative" banner that it says discriminates against Russian-speaking Americans.

Natalie Sabelnik, the organisation’s president, told Sputnik that the company’s sign on the Westside Highway in Manhattan reading “Vote Because Russian lessons are expensive” is blatant discrimination.

Vote because Russian lessons are expensive.
This election is wild 😂😂😂😂 pic.twitter.com/4ICzO4ORKn

“I do not expect an answer to the letter [sent by CRA] but if they do, it probably won’t be immediately. I’m certain they will consult with their lawyers first,” Sabelnik said.

Last week, Alexey Tarasov, a lawyer and CRA board member sent Manhattan Mini Storage a letter urging them to remove the banner.

“The meaning of your message is unequivocal: your basic premise is that the Russians will undermine elections in this country and that Americans need to fight against that. The ‘Russian lessons’ is a thinly veiled reference to the election of 2016, which led to an investigation of the Russian Government’s purported collusion with the Trump campaign,” Tarasov wrote.

“The display you put up for the public to see is grossly offensive, insasmuch as it disparages all people of Russian origin and all people that speak the Russian language,” the attorney continued. “We call on you to remove the banner and never to display such messages in the future.”

Tarasov recalled that as many as 600,000 Russian-Americans live in New York City, with a million more residing in the New York Tri-State area.

In addition to asking the company to take down the banner and make a commitment not to display any more signs with “ethnically-offensive” messages, Tarasov urged Manhattan Mini Storage to institute written “Anti-Discrimination/Implicit Bias policies” and train staff on the matter of “diversity and anti-discrimination (to include national origin discrimination.”

Manhattan Mini Storage’s sign sparked a wave of angry comments on its Facebook page, many of them by Russian-speakers.

“Are you seriously suggesting that Russia is about to invade Manhattan? If so, rest assured that 600,000 Russian Speaking New Yorkers can translate for you. By the way, that’s how many people you have offended by this. Did people run out of reasons to vote for Biden and that’s the best you could think of? Remove this xenophobic garbage!” a user named Lyudmila wrote.

“It’s a pure hate speech. You guys vote for equality and bullying people for their Nation. It isn’t funny. It isn’t smart. This campaign should be sued,” Nick added.

“Disgusting xenophobic Cold War message. Let’s discriminate against Russians in a time when there’s already so much division,” a user named Mar said.

“This is offensive and dumb at the same time. Are they implying that Trump is supported by Russia, or that Socialist/Democrats will remake USA into USSR?” Leon asked.

“Why are you spreading hatred?” Margaret Kimberley chimed in.

“I Am Russian-American. U r offending me. Can give some lessons for half a price if you wish,” a user named Elena joked.

“Lovely way to get rid of clients. Please keep going – which language lessons do you think will be cheaper?” Irina added.

“So to follow your logic, Trump is backed up by Russians, then you do not need to vote, Russians will do the magic again,” Julia wrote.

“Russophobia at its stupidest,” a user named Ruth quipped.

Trump Extends ‘National Emergency’ Order Targeting Foreign Meddling in US Elections
Over the past several months, US officials and media have ramped up claims about ‘Russian meddling’ in the 2020 elections, with the allegations echoing those made before and after the 2016 race. After 2016, Democratic lawmakers and media accused Moscow of systematic hacking, trolling and an interference campaign aimed at getting Donald Trump elected, with some going so far as to suggest that Trump "colluded" with the Kremlin to make it into the White House. The latter claims fell apart in April 2019, when special counsel Robert Mueller released a 448-page report definitively concluding that his team had found no evidence of any collusion between Russia and the Trump campaign. Similarly, investigations by tech giants including Google, Facebook and Twitter about alleged "Russian bot trolling" found these alleged efforts were vastly exaggerated and that their impact on the 2016 race virtually non-existent.

Nevertheless, despite the lack of evidence of wrongdoing, Washington introduced several rounds of sanctions against Russian individuals and the Russian government, including the expulsion of dozens of Russian diplomats in late 2016, and a package of sanctions and secondary restrictions in 2017 known as the ‘Countering America’s Adversaries Through Sanctions Act’. In August 2020, an exasperated Acting Homeland Security Secretary, Chad Wolf, said that Washington had actually “run out of” Russians to sanction over the meddling claims.