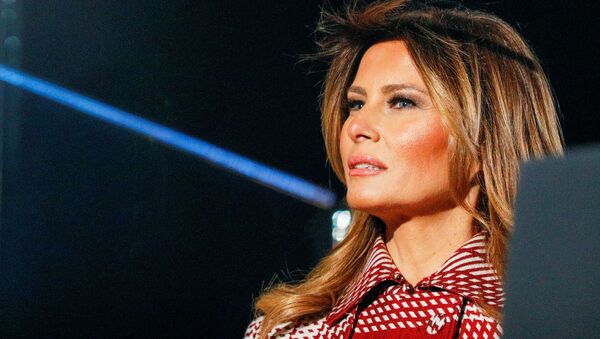 Svetlana Ekimenko
All materialsWrite to the author
The comments ascribed to First Lady Melania Trump came as part of recordings released by a former senior adviser to FLOTUS Stephanie Winston Wolkoff, who published her tell-all "Melania and Me: The Rise and Fall of my Friendship with the First Lady" on 1 September.

First Lady Melania Trump is reportedly heard saying "give me a f***ing break" when venting her frustration at being slammed for her husband's now-ditched policy of splitting up families who illegally crossed the border, reports CNN.

She is also suggested as having railed at the necessity of performing traditional FLOTUS tasks, such as decorating the White House for Christmas. 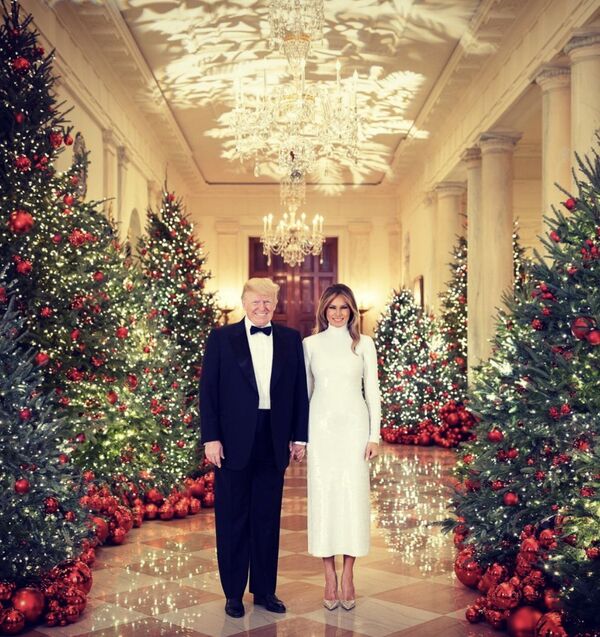 The revelations come in a batch of tapes said to have been secretly recorded in the summer of 2018 by Stephanie Winston Wolkoff, a former best friend and senior adviser to FLOTUS, after she left the White House.
The disgruntled ex-staffer recently published a tell-all book, "Melania and Me: The Rise and Fall of My Friendship with the First Lady" on 1 September.

Excerpts of the conversations with Melania Trump were played on CNN's "Anderson Cooper 360" on Thursday night by Wolkoff, who had started working for the Trump administration in 2016.

In the tapes the First Lady is suggested as revealing details about her visit to an immigration detention centre in McAllen, Texas, in June 2018, and seems to sound vexed over being criticised for Washington's policy of splitting up families who have illegally crossed the border.

While making mention of her traditional first lady tasks, such as decorating the White House for Christmas, Melania Trump is apparently heard saying:

"They say I'm complicit. I'm the same like [President Trump], I support him, I don't say enough. I don't do enough", says FLOTUS, according to the tapes. 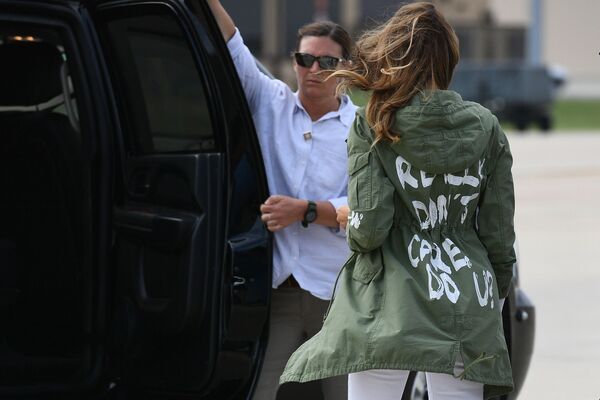 US First Lady Melania Trump departs Andrews Air Rorce Base in Maryland June 21, 2018 wearing a jacket emblazoned with the words "I really don't care, do you?" following her surprise visit with child migrants on the US-Mexico border.
© AFP 2022 / MANDEL NGAN

Then the former model switches to the censure she has received over the immigrant policy espoused by the US president.

"Ok, and then I do it. And I say that I'm working on Christmas planning for the Christmas. And they said, 'Oh, what about the children that they were separated?'"

In the secretly recorded call said to be dated June 2018, Melania Trump then says:

"Give me a f***ing break. Where they were saying anything when Obama did that?"

The statement is suggested as echoing Donald Trump's claim that predecessor Barack Obama was responsible for launching the policy of separating children from their parents at the border.

Trump signed an executive order halting his administration's policy of separating children from their parents in June 2018, while later that month a California judge ordered US border authorities to reunite separated families within 30 days.

In a reference to some unspecified mother and child, the First Lady is heard saying:

"I cannot go. I was trying to get the kid reunited with the mom. I didn't have a chance. Needs to go through the process and through the law".

She then adds that there would have been little progress in that particular incident if they had gone to the press:

Melania Trump also appeared to intimate that she believed children in detention camps were happy to have escaped dire circumstances.

"All these kids that I met they were, they're here in the shelters because they were brought by it through Coyotes, the people who were trafficking - that's why they put them in jail", the First Lady says in the tapes, according to the outlet.

Wolkoff also told the show's host that Melania Trump opted for the infamous "I really don't care, do u?" jacket when she visited a migrant child detention centre as a publicity stunt aimed to "garner the attention of the press".

"The jacket was... a publicity stunt, and it was to garner the attention of the press, to make sure that everyone was aware that Melania was going to the border".

​During the CNN broadcast, in another audio clip apparently between Melania Trump and Wolkoff, the former adviser asks the First Lady what made her buy the controversial jacket, to which she allegedly responded:

"I'm driving liberals crazy for sure ... And they deserve it".

In the wake of the broadcast where the secretly recorded audio tapes were released, Melania Trump's chief of staff Stephanie Grisham slammed Wolkoff for releasing the recording in a statement that said:

"Secretly taping the First Lady and willfully breaking an NDA to publish a salacious book is a clear attempt at relevance. The timing of this continues to be suspect - as does this never-ending exercise in self-pity and narcissism".

A former Vogue magazine staffer who was involved in overseeing diverse high-dollar events such as the Met Gala, had apparently enjoyed a close relationship with Melania Trump for more than a decade, meeting in 2003, and moving in the same circles when living in New York City.

After his presidential election win, Trump hired her to take on the position of senior adviser to Melania Trump.
Yet, as investigations delved deeper into inaugural activities, prompted by the sums of money Wolkoff and her events firm allegedly pocketed during the planning and execution of the event, her relationship with the White House went awry.

Wolkoff was let go from her position at the White House after reports that her company had profited unduly from working on the inauguration.

According to the FLOTUS adviser herself, she was subsequently "fired" and "thrown under the bus", according to her interview to The New York Times.