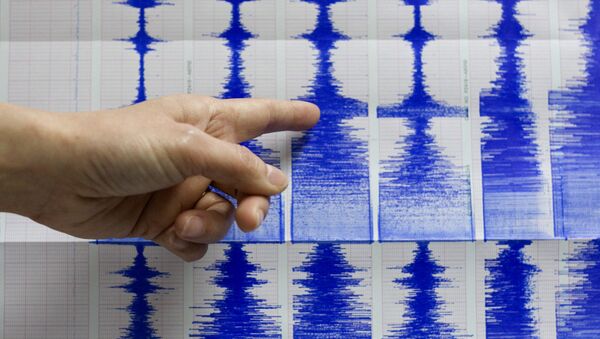 © AP Photo
Subscribe
Hundreds of earthquakes continue to take place across the Salton Sea area in Southern California, with more than 200 tremors reported this week, according to the US Geological Survey (USGS)

Since Thursday alone, more than 100 tremors have been reported in California.

According to the latest USGS update, a swarm of earthquakes southeast of the Salton Sea began on September 30.

​“The largest earthquake that has occurred, as of this release, is a magnitude 4.9 at 5:31 PM PDT on Sept. 30th. This earthquake and the associated swarm are located in an area of diffuse seismic activity between the San Andreas fault in the north and the Imperial fault to the south,” the USGS noted.

The USGS has also outlined several possible scenarios for the coming week in regards to earthquake activity in the California area.

Under the most likely scenario, earthquakes will continue, “possibly including earthquakes up to magnitude 5.4.” However, under this scenario, the rate of earthquakes in the swarm will decrease over the next seven days.

According to Michigan Technological University, earthquakes with magnitudes between 2.5 and 5.4 are felt but only cause minor damage.

In another, less likely scenario, a larger earthquake - up to a magnitude of 6.9 - could occur.

“Earthquakes of this size could cause damage around the area close to the earthquakes that have already occurred and would be followed by aftershocks that would increase the number of smaller earthquakes per day,” the USGS warned.

In the least likely scenario, a much larger earthquake, with a magnitude of 7 or higher, could take place in the next seven days. If such an earthquake occurred, it would severely impact communities and would most likely be followed by multiple aftershocks.

In addition to earthquakes, California is also battling wildfires. According to Weather.com, about two dozen major wildfires were burning across the state on Friday.

The Glass Fire burning in the counties of Napa and Sonoma is currently the biggest blaze, having ravaged more than 93 square miles of land and destroyed nearly 600 buildings. As of Friday morning, the fire was only 6% contained.

The US National Weather Service (NWS) on Friday also issued a heat advisory for the San Francisco Bay Area, warning of high temperatures that will lead to increased risk of heat-related illness.

“With wildfires burning around the region, smoke and haze will also continue to impact the San Francisco Bay Area and Central Coast,” the NWS warned.