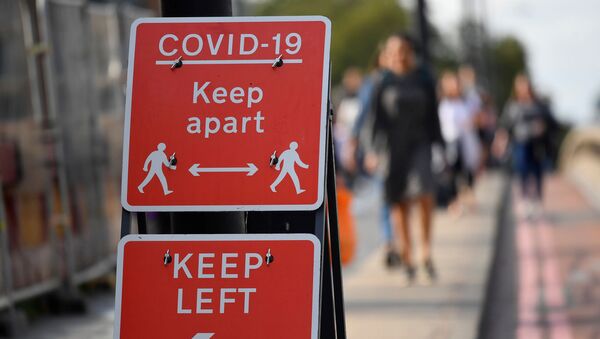 The UK government has reached a last-ditch deal with a group of more than 80 Tory rebels in the House of Commons, pledging votes for MPs on any new national COVID-19 restrictions.

"For significant national measures, with effect in the whole of England or UK-wide, we will consult Parliament. Wherever possible we will hold votes before such regulations come into force", Health Secretary Matt Hancock said on Wednesday.

He also urged the government "to act with speed when required", stressing that ministers "cannot hold up urgent regulations which are needed to control the virus and save lives".

The health secretary admitted that "scrutinised decisions are better decisions", voicing hope that advance votes would become a new convention for the pandemic.

Prime Minister Boris Johnson, for his part, called for "collective forbearance, common sense, and willingness to make sacrifices" when it comes to the fight against the coronavirus. He warned that tougher restrictions could be introduced if people fail to adhere to the current rules and COVID-19 cases continue to rise.

The developments followed The Telegraph quoting an unnamed Conservative lawmaker in northeast England as saying on Tuesday that "what happened with Boris [Johnson] only strengthened the argument for greater parliamentary scrutiny of new rules".

Earlier this week, the UK PM apologised on his Twitter page for "misspeaking" about his own coronavirus restriction rules on social gatherings in northeast England and beyond.

Speaking to reporters on Tuesday, Johnson said that "in the northeast and other areas where extra tight measures have been brought in, you should follow the guidance of local authorities -  but it's six in a home or six in hospitality but as I understand it, not six outside".

The remarks clearly ran counter to government guidelines, which warn those living in Northumberland, Newcastle, North and South Tyneside, as well as Gateshead, Sunderland, and County Durham "not to mix with people outside their household or bubble in indoor settings, including pubs and restaurants".

Johnson's apology cam as Parliamentary Speaker Sir Lindsay Hoyle reprimanded the government for failing to consult the House of Commons on the new COVID-19 restriction measures.

"The way in which the government has exercised its powers to make secondary legislation during this crisis has been totally unsatisfactory", Hoyle said, adding that some explanations the government offered on why it had bypassed Parliament showed a "total disregard" for MPs.

UK Chancellor Rishi Sunak Unveils New Measures to Support Jobs, Economy Amid COVID-19 Pandemic
The lockdown imposed in March was mostly lifted over the summer, but a recent rise in new coronavirus cases has now prompted the government to tighten restrictions again, including 10 p.m. closing time on bars and restaurants.

Commenting on the new rules, Johnson stressed that "this is by no means a return to the full lockdown of March" and that Britain is now better prepared for a second wave of the COVID-19 pandemic, which he earlier admitted is "coming in".