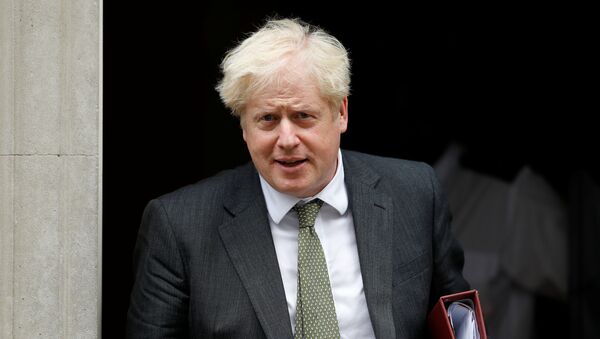 Tommy Sheridan
All materials
Boris Johnson “misspoke” the other day and illustrated yet again just how profoundly out of his political and intellectual depth he is as Prime Minister of the UK. He cannot even remember or explain his own government’s Covid19 restrictions so how the hell can he expect the general public to understand them?

He rambles, prattles, and jabbers incessantly but behind the frothy references to Greek classics is nothing but empty drivel. The guy is a buffoon, yet his embarrassing gaffes must not be allowed to hide the much more significant reality that under his leadership England is being led towards an authoritarian state goose step by goose step.

The totalitarian route map for England was briefly hinted at on the Politics Live show on the BBC is none of the guests seriously called out the enormity of the recent developments. Chris Bryant Labour MP did highlight that even during two world wars and plagues the infringements on civil liberties and curtailment of Parliamentary scrutiny of government actions had never been so severe as those contained within the Coronavirus Act (CA) 2020, an Act which transfers unprecedented powers to the PM and his Cabinet over every aspect of life in the UK with the ability to amend any provisions denied to Parliament. The very essence of Parliamentary democracy is nullified by the CA. But the fleeting discussion of the Department for Education guidance to school leaders and teachers last Thursday was woefully inadequate and disproportionate to the threat to democracy that the guidance represents.

From Nazi Book Burnings to Tory Bans on Anti-Capitalist Materials

When the Nazi party stood for election in July 1931 they didn’t stand on a platform of book burnings and cancellation of elections and parliament in favour of totalitarian rule but within two years of securing more seats than any other party, government by decree was instituted and book burnings were introduced as a warning that ideas and ideologies opposed to Nazism would not be tolerated.

On April 8, 1933, the Main Office for Press and Propaganda of the German Student Union proclaimed a nationwide "Action against the Un-German Spirit", which was to climax in a literary purge or "cleansing" ("Säuberung") by fire. The socialist works of Karl Marx and Karl Kautsky were the first to be placed into the bonfires. According to historian Karl Deitrich Bracher:

Now, eighty-seven years on from that Nazi darkness, consider the Tory Education Department ‘guidance’ to all primary and secondary schools in England:

·     a publicly stated desire to abolish or overthrow democracy, capitalism, or to end free and fair elections

·     the use or endorsement of racist, including antisemitic, language or communications

·     the encouragement or endorsement of illegal activity

·     a failure to condemn illegal activities done in their name or in support of their cause, particularly violent actions against people or property”

If you are not extremely alarmed by this government guidance your either not paying attention or part of the conspiracy. Read it slowly. Examples of extreme political stances include “a publicly stated desire to abolish or overthrow democracy, capitalism OR to end free and fair elections.” This is intellectual gibberish, but it is dangerous gibberish, nonetheless. I was elected to represent the people of Glasgow at two local Council elections and two Scottish Parliament elections. I openly and keenly explained my desire to abolish capitalism and replace it with an economic system based on public ownership of the major levers and industries in the economy in order to produce a more equitable, sustainable and peaceful society. I was regularly invited to speak to modern studies and history classes about my views and the activities of the Scottish Parliament. Hundreds of schools requested copies of my election manifesto for the purpose of political balance when explaining the nature of parties represented in the Scottish Parliament.

Under this DoE guidance issued last Thursday if applied in a Scottish context I would be banned from schools as would my election manifesto. My 1994 book ‘A TIME TO RAGE’ told the story of the mass campaign of civil disobedience against the Thatcher poll tax which brought down her rotten tax and her. It was a justification for, and promotion of breaking laws designed to impoverish and/or suppress the working class. This DoE guidance would ban that book from schools.

My book ‘Imagine’ from 2000 was an attempt to explain the case for socialism and the overthrow of capitalism in the twenty-first century. The socialist giant Tony Benn, who is sadly missed but never forgotten, said of that book:

“Imagine is one of the very best books I have ever read on the subject of Socialism”.

Biographies of declared socialists Martin Luther King Jr would be banned. Try teaching the history of the US Civil Rights Movement without including the works of MLK.

The Nelson Mandela biography and 2013 film ‘Long Walk to Freedom’ would be banned. He was a declared socialist and advocated civil disobedience and armed resistance against the South African Defence Force. Try explaining apartheid to a history or modern studies class without referencing the writings and speeches of Nelson Mandela in the struggle which overthrew that inhumane system.

Think about the reference to ‘encouragement of or endorsement of illegal activity’. This from a government that voted last week to break international law via its Internal Market Bill. A government that illegally arms Saudi Arabia despite High Court rulings explicitly designating such deals as illegal.

So pamphlets and leaflets from the Campaign for Nuclear Disarmament (CND) would be explicitly banned as they openly, and justifiably, advocate civil disobedience actions to highlight the immorality and illegality, under international law, of nuclear weapons. Inquisitive school students wondering why properly funded public services like the NHS are always starved of funds and a proper legally enforceable living wage is always dismissed as unaffordable would never be exposed to the argument that spending £205 billion on health and welfare would make much more sense, morally and economically, than spending such an obscene amount on Trident.

The Campaign Against The Arms Trade (CAAT) would be banned from school classrooms as they openly endorse and promote civil disobedience, peaceful but illegal actions, against the indecent and disgusting waste of resources in a trade that doesn’t just profit from death and destruction but promotes wars to feed their insatiable greed.

You can also bet your bottom dollar this DoE guidance is aimed at preventing troublesome Extinction Rebellion materials or Black Lives Matter pamphlets reaching classrooms. Young people must be brought up and educated properly as far as this authoritarian Tory government are concerned. They must learn to do as they are told, keep the law at all time and recognise that it is extreme and unacceptable to ever support overthrowing capitalism in favour of an alternative social and political system which prioritises people over profit and believes morals are more important than money. This Tory government are trying to outlaw any ideas which run counter to their neoliberal capitalist ideology. That’s exactly what the Nazis did in 1930’s Germany. The book burnings have not started yet, but this DoE guidance represents the thin end of that deeply authoritarian and repulsive edge. Be warned.