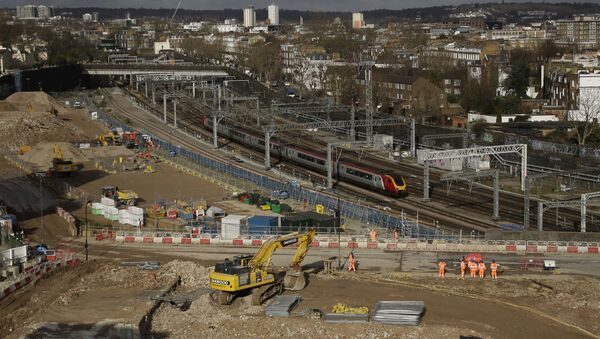 Around 15 environmentalist campaigners have been living in treehouses up to 60 feet off the ground in Jones' Hill Wood in a bid to stop developers clearing the site to make way for the High Speed 2 rail link.

Protesters camped out in a Buckinghamshire wood on the route of the UK's High Speed 2 (HS2) railway have been evicted from treehouses by dozens of bailiffs and police.

Local media reported that 40 agents from the National Enforcement Team, backed by 20 police officers, moved into the site at Jones' Hill Wood near Aylesbury at 5.30 am on Thursday wielding chainsaws.

The wood is said to have inspired famous children's author Roald Dahl to write his novel Fantastic Mr Fox, whose hero is besieged in his den by three angry farmers who he has been poaching from.

"We were expecting some movement today, and we weren't disappointed," protester Ross Monaghan told The Bucks Herald. "At about 5.30 am this morning a national enforcement team of about 40 people, along with 20 supplementary police officers arrived today to try and evict us from the site."

He said he witnessed two other squatters arrested as they tried to stop the agents cutting down a tree. "It was really brutal tactics, I think they used an unnecessary amount of force."

But Monaghan said they had not reckoned with the campers living in treehouses up to 60 feet above the ground. "I don't think they realised that 16 of us had erected treehouses in the trees as part of the campaign to save the woods, where we have been disrupting contractors and also taking ecological surveys," he said.

Those surveys found 43 species of moth, seven species of bat, some of them rare and protected, at least three badger sets and a den of foxes.

“I am a public official and I have followed a path of public service throughout my life," Masters said. "This began 34 years ago when I joined the Royal Air Force. I swore to protect my fellow citizens then and now as we face the greatest challenge in climate change I am duty bound to continue to protect the people of this country and the world."

Masters said he was ready to go to jail to highlight "the catastrophic damage HS2 will do to our natural environment."

He said Prime Minister Boris Johnson's pledge to protect the environment were at odds with his support for "this destructive and unnecessary rail link."

"As the chainsaws whine around me this morning I am resolute and determined to fight for a future fit for my grandchildren,” Masters said.

HS2 will connect London to Manchester and Leeds via Birmingham, with 400m-long (1,300ft) trains carrying as many as 1,100 passengers at up to 250mph departing up to 14 times an hour in each direction.