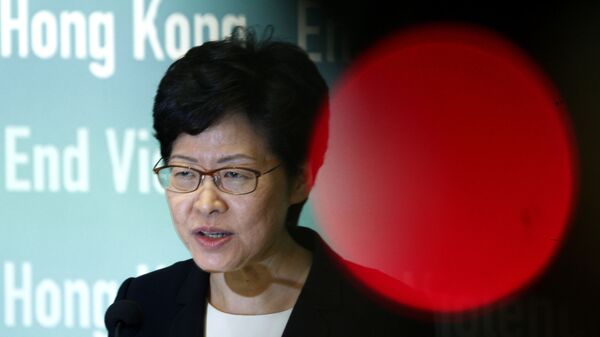 Demond Cureton
All materialsWrite to the author
The speech comes amid an ongoing diplomatic row between Washington and Beijing, leading to tit-for-tat measures, sanctions and bilateral ties sinking to historic lows, media reported on Thursday.

China's national security law has restored peace to Hong Kong, allowing citizens to "again exercise their rights and liberties in accordance with the law", chief executive Carrie Lam said at an annual event on Thursday.

World
Throwing Shade: Hong Kong Markets To 'Go To Hell' Under China's Control, Trump Says Amid Trade Spats
Speaking at an event commemorating China's 71st National Day, Lam urged the region to keep a "safe and stable social environment" as well as follow the 'One country, two systems" agreement inked in 1997, among others.

The past three months had restored stability to Hong Kong and safeguarded national security, allowing citizens to enjoy "basic rights and freedoms in accordance with the law", she added.

"So, no matter how severe some foreign governments, holding 'double-standards', are going to level unjustified accusations against the authorities in charge of implementing the National Security Law, or aggressively imposing further sanctions against HKSAR officials responsible for safeguarding national security, I and my relevant colleagues will continue to discharge our duty to safeguard national security in accordance with the law without fear or anxiety", Lam said in her speech

The speech comes amid tensions with Washington, London and Brussels, who have voiced criticisms over the new security law aimed at cracking down on pro-secessionist protests gripping the region for several years.

Hardliner Zheng Yanxiong Appointed as a Head of Hong Kong's National Security Agency
Lam slammed opponents of the new security law as "the enemy of the people" and urged them to stop "smearing" efforts to back the legislation, it was reported earlier in June.

Chinese president Xi Jinping also warned in a commemorative speech in early September it was essential to "uphold the leadership" of the Chinese Communist Party, adding individuals or state forces should never "separate the CCP and Chinese people", distort the Party's history, among others.

The Trump administration recently sanctioned numerous officials connected to the bill, stating they had violated Hong Kong's status as a special administrative region, sparking criticism from Beijing and the territory's officials.

Washington has been locked into a contentious trade and tech war with Beijing in a bid to block the nation from rising as the world's tech capital, targeting numerous Chinese tech firms, including Huawei, ZTE, TikTok owner ByteDance and others.