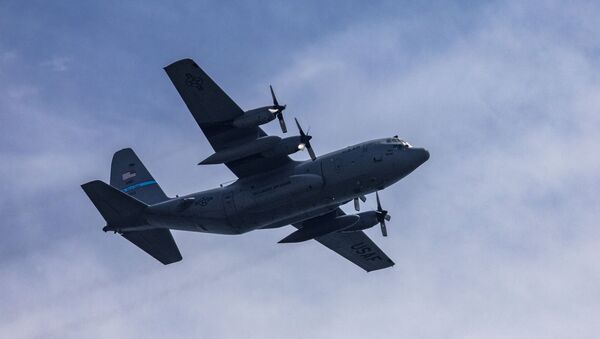 Henry Batyaev
All materialsWrite to the author
According to the local media outlet Dumskaya, the C-130 Hercules took part in celebrations dedicated to the 75th anniversary of the Normandy landings in 2019.

A US C-130 Hercules military transport plane has made an emergency landing at Odessa International Airport in Ukraine, local media outlet Dumskaya reported Wednesday. According to the report, the plane took off from the Ramstein Air Base in Germany, but one of its four engines failed.

The crew is currently trying to deal with the engine failure, Dumskaya added. It is unclear if there are any casualties or damages to the aircraft as a result of the emergency landing.

Dumskaya noted that this particular aircraft took part in the celebrations marking the 75th anniversary of the Normandy landings in 2019. The plane was marked with so-called "invasion stripes" – wide white bands on the tail of the fuselage. It also had the registration mark of a Douglas C-47, an aircraft that was used to deploy US paratroopers in France in 1944.