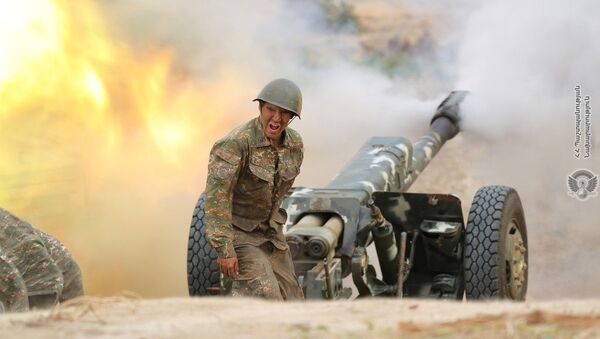 Subscribe
International
India
Africa
The long-existing tensions between Armenia and Azerbaijan escalated into a direct confrontation on Sunday after the two sides accused one another of sparking clashes in Nagorno-Karabakh, an Armenian-majority region that proclaimed independence from what was then Soviet Azerbaijan in 1991 and has since remained internationally unrecognised.

Both Armenia and Azerbaijan report continuing clashes in the Nagorno-Karabakh region, with the number of casualties, civilian and military, on both sides rising. As the fresh round of hostilities, which started on 27 September, with Azerbaijan and Armenia accusing each other of carrying out provocations, Armenia and Nagorno-Karabakh declared martial law and general mobilisation, while Azerbaijan declared partial martial law and partial mobilisation.

The international community has called on the two sides to de-escalate tensions, cease the fire and return to the negotiating table. The UN Security Council expressed support for the central role of the Organisation for Security and Cooperation in Europe Minsk Group co-chairs and urged the sides to work closely with them.

Nagorno-Karabakh, an Armenian-majority autonomy, proclaimed independence from what was then Soviet Azerbaijan in 1991. A major conflict between Baku and Yerevan ravaged the area until 1994 when the sides agreed to stick to the peace process mediated by the OSCE Minsk Group. However, no solution has been reached since then and the conflict has remained frozen.

Azerbaijani Foreign Ministry spokeswoman Leyla Abdullayeva, commenting on Russia's concern over reports of foreign mercenaries in the conflict zone in the unrecognized republic of Nagorno-Karabakh, said that "Yerevan attracts them from the Middle East."

Earlier, the Russian Foreign Ministry said Moscow was concerned about reports about the transfer of militants of illegal armed groups to the zone of the Nagorno-Karabakh conflict. According to Russia's information, militants, in particular from Syria and Libya, are being transferred to the Karabakh conflict zone to take direct part in hostilities.

"In connection with the statement of the Russian Foreign Ministry on the presence of foreign mercenaries in the conflict zone, we would like to note that Armenia makes extensive use of such resources, we have repeatedly expressed our concern about this. Armenia is especially actively attracting terrorists and mercenaries from the Middle East," Abdullayeva said.

Armenian Prime Minister Nikol Pashinyan convened a meeting of the Security Council on Wednesday to discuss further actions of the country's armed forces in the context of escalation in Karabakh, the government said.

"During the meeting, issues related to the operational situation on the Karabakh-Azerbaijani line of contact and further actions of the Armenian armed forces were discussed", the statement says.

Condemned use of force and called for immediate cease-fire. Negotiations are only way forward. Support to @OSCE

Civilians must be protected. pic.twitter.com/zEWHhs1Ems

BERLIN (Sputnik) - German Foreign Minister Heiko Maas on Wednesday expressed his astonishment with the information on casualties, including civilian, of the recent flare-up of hostilities in the breakaway republic of Nagorno-Karabakh.

Earlier in the day, Maas held an online meeting with his North Macedonian counterpart, Bujar Osmani.

"We have also discussed the troubling developments, with which we are dealing right now, meaning the fighting between Armenia and Azerbaijan. Hundreds of deceased, including many civilians. These are shocking numbers", Maas at a press conference after the talks.

The minister urged an immediate cessation of towns and villages and the sides returning to the negotiating table under the OSCE auspices.

The Armenian ministry's press service remarked that the two ministers said that the non-regional powers' interference in attempt to destabilise the region was unacceptable.

"He [Mnatsakanyan] strongly condemned the direct political and military-technical involvement of Turkey in the military activities that Azerbaijan is holding at the contact line and on the border between Armenia and Azerbaijan", the Armenian Foreign Ministry said.

YEREVAN (Sputnik) - Armenian Defence Ministry spokesman Artsrun Hovhannisyan said on Wednesday that Azerbaijan had allegedly transferred the air control of the offensive operation against Karabakh to the Turkish Air Force.

According to Hovhannisyan, the flights of the Turkish and Azerbaijani aircraft on Wednesday "were controlled by the Turkish air command post E7-T near the Turkish cities of Erzurum and Kars."

"It is possible that the leaders of the Turkish Air Force were on board this plane", Hovhannisyan wrote on Facebook.

BRUSSELS (Sputnik) - European Council President Charles Michel is holding talks on Wednesday with the leaders of Azerbaijan and Armenia ahead of EU summit, which will take place on 1-2 October in Brussels, a high-ranking EU official told reporters.

He also confirmed that European leaders would discuss the need to prevent outside interference in the conflict, which could aggravate the situation.

"Armenia has made false claims that do not rely on any evidence that Turkish aircraft and UAVs were used against them... These allegations were not taken seriously by anyone except their own supporters. On the other hand, Azerbaijan’s Armed Forces have shown the whole world in the past few days that it has the ability to achieve victory on its own, and the determination to save its own occupied territories", Turkey’s Ministry of National Defence said in a statement.

Earlier in the day, a representative for the Armenian Defence Ministry said that two Azerbaijani drones had been destroyed over the city of Stepanakert. On Tuesday, Yerevan said that a Turkish F-16 had downed an Armenian Su-25 in Armenia's airspace.

"The Azerbaijani propaganda machine spread yet more disinformation that the Artsakh [Nagorno-Karabakh] Defence Army used the Tochka-U [OTR-21] tactical missile system. In the photograph presented as evidence, in fact, [it's] not Tochka-U, but a completely different missile", the official statement from Stepanakert read.

"Some time Ago, the Armenian military used the missile system Tochka-U [OTR-21 Tochka, NATO reporting name SS-21 Scarab]", the Azerbaijani ministry said, adding that three of the rockets, launched by the Armenian forces, didn't explode due to their "low quality".

"I do not want to talk about the number of F-16 jets in our region, but they fly in pairs", Hovhannisyan said at a briefing.

On Tuesday, Armenian Defence Ministry spokeswoman Shushan Stepanyan said that a Turkish F-16 jet had downed an Armenian Su-25 in the country’s airspace amid speculation that Turkey might be involved in the ongoing confrontation after it expressed support to Baku. Azerbaijani presidential aide Hikmet Hajiyev subsequently said that the air control systems of Azerbaijan did not record the flight of the Su-25 of the Armenian Air Force.

BAKU (Sputnik) - The number of civilian fatalities in the Karabakh region increased to 14, and the number of those injured to 46, the press service of the Azerbaijani Prosecutor General’s Office told Sputnik.

"As a result of large-scale shelling of Azerbaijani civilians by the enemy armed forces, 46 civilians so far have been hospitalised with various injuries, 14 people died", the prosecutors said.

According to the Azerbaijani claims, Armenian armed forces continue striking areas with many residents and civilian infrastructure.

Hikmet Gadjiev, the Assistant to the President of Azerbaijan in Foreign Affairs, stated that two Armenian Su-25 planes crashed into a mountain and exploded.

Armenia's Ministry of Defence has published a photo of a downed Su-25 #SputnikUpdates https://t.co/rTCpIiWS1P pic.twitter.com/7KPT7eP25F

"Azerbaijan is carrying out airstrikes in the northern direction of the contact line. Turkish drones and multi-functional F-16 fighters of the Turkish Air Force have been raised in the sky. The enemy is acting from afar, without entering the area covered by air defence systems. Long-range air-to-ground missiles are being used", an official statement read.

The Armenian Defence Ministry also said it had intercepted conversations between Turkish-speaking pilots in Karabakh.

BAKU (Sputnik) - The Azerbaijani Defence Ministry on Wednesday said that Armenian troops were shelling the city of Terter, located along the contact line in Karabakh, and also reported injuries and damage done to civilian infrastructure.

"Starting from 8:00 a.m. [04:00 GMT] on 30 September, units of the Armenian Armed Forces have been conducting artillery shelling of the city of Terter. According to preliminary information, some damage was done to civilian infrastructure, there are injuries", the Azerbaijani Defence Ministry said in a statement.

"We did not discuss a possible military intervention of Russia in the Karabakh conflict with the Russian president. Also, we do not need to use the potential of the 102nd Russian base yet, but if such a need arises all the legal foundations are there", Pashinyan noted.

Pashinyan noted that Yerevan is working closely with its Collective Security Treaty Organisation allies, but stressed that initiating peacekeeping procedures is not on the country's agenda.

The Azerbaijani Defenсe Ministry claims that the Armenian Armed Forces lost up to 2,300 people, killed or wounded, and that around 130 armoured vehicles were destroyed during the ongoing hostilities along the line of contact in Nagorno-Karabakh.

"From 27 September up to this morning, around 2,300 enemy fighters have been eliminated or wounded; around 130 tanks and other armoured vehicles, over 200 artillery, missile and mortar launchers, around 25 air defence weapons; six command and control and observation posts; five ammunition depots; around 50 armour-defeating weapons, and 55 automobiles were eliminated and taken out of action", the Azerbaijani Defence Ministry said.

The ministry also said that Armenia had deployed additional troops to the Mataghis area and was embarking on an offensive.

Azerbaijani Defence Ministry Claims to Have Destroyed Armenian S-300 in Nagorno-Karabakh
05:05 GMT 30.09.2020
Newsfeed
0
Access to the chat has been blocked for violating the rules . You will be able to participate again through:∞. If you do not agree with the blocking, please use the feedback form
The discussion is closed. You can participate in the discussion within 24 hours after the publication of the article.
To participate in the discussion
log in or register
loader
Chats
Заголовок открываемого материала