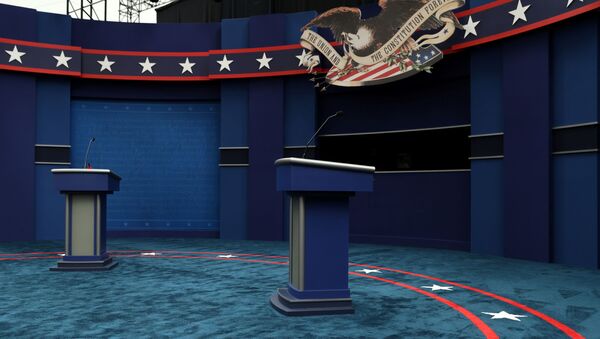 The 2020 candidates are expected to be pressured on a range of issues, including the US' coronavirus response, a Supreme Court nomination, taxes, and the public unrest in the United States.

US President Donald Trump and Democratic presidential nominee Joe Biden are participating in the first presidential debate held in Cleveland, Ohio, on Tuesday.

Earlier, the Trump campaign said it had rejected Biden's request for multiple breaks during the debate, which the former vice president's campaign has denied. Trump campaign also said Biden had previously agreed but reversed himself earlier on Tuesday.

The next two debates between two candidates are set to take place on 15 October in Miami and on 22 October in Nashville.

Table of contents
Presidential debate between Donald Trump and Joe Biden is over
Biden: "No-one has established at all that there is fraud related to mail-in ballots"
Trump says "can't go along with that" if there's evidence of ballot manipulation, urges supporters to watch the polls very carefully
Trump on unsolicited ballots: there are examples of fraud
Trump says US election result may not be known "for months"
Biden accuses Trump of scaring people out of voting, says there is no evidence of manipulation of mail-in ballots
Responding to criticism from Trump, Biden says he doesn’t support the Green New Deal
Biden says Trump is “wrong” when he says environmental regulations would hurt the economy
Asked about climate change Trump says "we have to do everything to have immaculate air, immaculate water and do whatever else we can that's good"
Biden: "Under this president we've become weaker, sicker, poor, more divided and more violent"
Trump: "there has never been an administration or president that has done more than I’ve done in a period of three and a half years"
Biden Says He Totally Opposes Defunding Police
Trump to Biden on recent protests "we believe in law and order but you don't"
Biden calls Trump a "clown" in the heat of debate
Biden on his son Hunter's controversy after confronted by Trump: "my son did nothing wrong", his position "discredited"
Trump says pays "millions of dollars" in income tax
Trump: "he wants to shut down this country and I want to keep it open"
Biden slams Trump on COVID-19 situation: "it is what it is because you are who you are"
Biden slams Trump's healthcare policy, calls him a "liar"
Trump says the Democratic Party "wants to go socialist", Biden responds "I am the Democratic Party right now."
Trump defends Supreme Court pick timeline using the words of Justice Ginsburg to say that a president can fill a vacancy, and says he serves for four years, not three.
The Candidates Donald Trump and Joe Biden Enter the Stage
First Presidential Debate Between Donald Trump and Joe Biden Ahead of 2020 US Election Kicks Off
New firstOld first
02:47 GMT 30.09.2020
02:43 GMT 30.09.2020
02:41 GMT 30.09.2020
02:38 GMT 30.09.2020
02:35 GMT 30.09.2020
02:34 GMT 30.09.2020
02:32 GMT 30.09.2020
02:29 GMT 30.09.2020
02:26 GMT 30.09.2020
02:19 GMT 30.09.2020
02:18 GMT 30.09.2020
02:10 GMT 30.09.2020

"I am totally opposed to defunding police," Biden said during the debate in Cleveland on Tuesday.

Biden claims Trump is a president who has been generating racial hatred. Trump responds by citing the 1994 crime bill Biden helped pass, claiming that Biden has treated the Black community “about as bad as anybody in this country”.

Switching to the topic of the recent protests, Trump says he got riot-hit cities back under control, but in some places Democrats wouldn't let his administration do that.

Trump says “more people will be hurt by continuing,”. Trump also says that masks are "ok". "I don't wear masks like him, every time you see him he's got a mask," he adds.

Trump says he wants to fix ObamaCare, Biden says "He is not for any help for people needing healthcare."