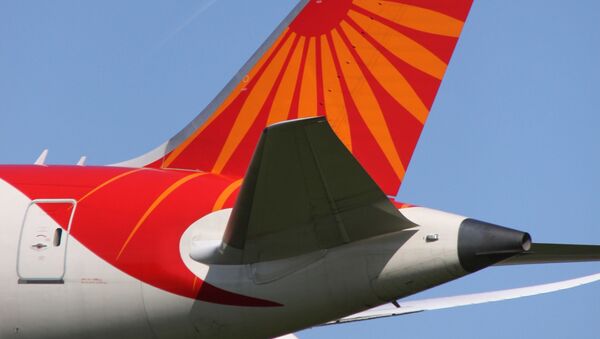 Pratibha Sharma
Sputnik correspondent
All materialsWrite to the author
India's national carrier Air India is in severe financial crisis, prompting the government to seek bidders to buy a 100 percent stake in the 121-strong fleet. The full-service carrier is $8.3 billion in debt. Despite the bidding deadline being extended for the fourth time this year, experts point out why it may attract bidders this time.

Founded by well-known Indian industrialist JRD Tata in 1932, and later taken over by the Indian government, Air India was a cause for pride and joy for the country. Since then, the carrier has gone from glory to financial burden on the exchequer.

"The government has decided to disinvest Air India due to its fragile finances and its continued and accumulated losses. Further financial support to revive the airline in a mature and competitive aviation market would not be the best use of scarce financial resources of the government", Hardeep Singh Puri, Minister of Civil Aviation said on 17 September in parliament.

With 30 October set as a new deadline for bidders to buy a full stake in the airline - India's Tata Group showed interest in bidding - anticipation is running high over whether the attempt will be successful this time.

Sputnik has contacted observers to name the main reasons that will likely stimulate bids to purchase the carrier this time.

Air India has been at the helm of carrying out repatriation flights in the country in the wake of the coronavirus pandemic. Vande Bharat - the largest and phased evacuation mission - kicked off on 6 May and is currently underway. Civil Aviation Minister Hardeep Singh Puri recently announced that the carrier had generated over $350 million from these flights.

"For Air India and Air India Express who were solely responsible for repatriation flights, this will offset a small percentage of their overall revenue lost", he said.

There were 539 pilots and 3,647 other non-technical employees on Fixed Term Contracts in Air India Limited as of July. However, Air India has undertaken significant cost-cutting measures during the pandemic. The carrier has started to identify people who can be sent on compulsory leave without pay for up to five years. The move was met with fierce opposition from the airline's staff.

"Due to the outbreak of COVID 19, extraordinary circumstances have reduced the commercial operations of the company resulting in the redundancy of manpower. Hence, Post Retirement Contracts with respect to 61 pilots and 93 other categories of employees have been discontinued", the ministry said while justifying the measures.

Will this contribute to increasing or saving operating costs for the airline? The expert says yes, but this alone would not suffice because Air India was taking similar measures before the advent of the COVID pandemic.

"Air India was strategising cost-cutting and debt reducing measures even before the pandemic hit to attract potential bidders", Abraham said.

In December of last year, the federal government decided to sell its entire 100 percent stake in Air India after multiple unsuccessful attempts to find bidders. Previously, the government was prepared to sell a 76 percent equity share capital of the airline along with control of management to private players, but to no avail.

According to Abraham, the government's decision to sell a 100 percent stake in Air India with reduced debt for the new owner will make the national carrier much more attractive to potential bidders.

In July of this year, the government allowed non-resident Indians (NRIs) to acquire a 100 percent stake in the national carrier, raising the previous limit of 49 percent.

Talking about the same, the aviation expert said, the move may increase the attention of private individuals interested in the carrier.