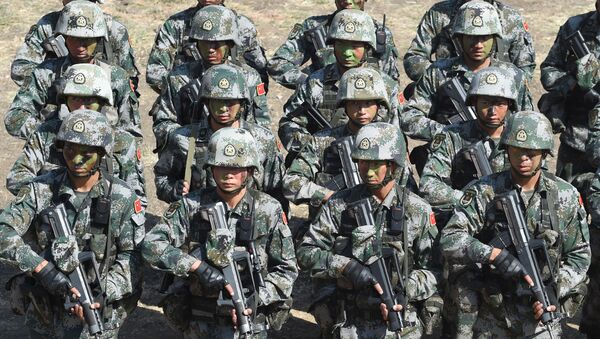 Nair N.B.
Sputnik correspondent
All materialsWrite to the author
Sandeep Datta
Sputnik correspondent
All materials
On the side-lines of the Shanghai Cooperation Organisation meet on 10 September, the Indian and Chinese foreign ministers met in Moscow. Both agreed to a five-point formula to cool tempers in the Ladakh region. But their armies have been positioned face-to-face along the border after engaging in one of their worst face-offs in decades in mid-June.

Diplomats of India and China held a virtual meet on Wednesday and discussed ways to implement a five-point formula reached earlier this month by their foreign ministers to normalise the situation along the border in eastern Ladakh.

The 19th meeting of the Working Mechanism for Consultations and Coordination on border affairs emphasised the need to implement steps outlined after the last meeting of senior commanders to avoid misunderstanding and to maintain stability on the ground.

The Indian External Affairs Ministry said in a statement on Wednesday that both sides had “also noted that the agreement between the two Foreign Ministers should be sincerely implemented to ensure disengagement at all the friction points along the LAC (Line of Actual Control)”.

The meeting was held a day after the dispute between the two countries took a new turn, with Beijing allegedly going back on its agreements on the border, saying it would only accept the 1959 line, which its then Premier Chou Enlai spoke of in a letter to then Indian Prime Minister Jawaharlal Nehru.

“Therefore, the insistence now of the Chinese side that there is only one LAC is contrary to the solemn commitments made by China in these agreements”, the Indian External Affairs Ministry clarified for China in a statement on Tuesday.

Earlier this month, Indian Defence Minister Rajnath Singh told the parliament that if China implements the agreement reached between External Affairs Minister Subrahmanyam Jaishankar and his Chinese counterpart Wang Yi, it “could lead to complete disengagement and restoration of peace and tranquillity on the border areas”.

Meanwhile, Chinese Foreign Ministry spokesperson Wang Wenbin said on Tuesday, 29 September that its troops have long been on the “Chinese side of the LAC and complying with bilateral agreements with India".

“We are committed to maintaining peace and stability in the border areas. At the same time, we firmly safeguard territorial sovereignty and national security”, Wang asserted.

India and China have unresolved border disputes over Arunachal Pradesh in the northeast and in Ladakh.

Both neighbours have been engaged in dialogues to resolve the issue both at the army commander and diplomatic levels. But, so far, there has been no success.

The India-China border covers the 3,488 km Line of Actual Control (LAC), a de-factor border line, which is mainly a land border in most regions. But in the Pangong Tso area in eastern Ladakh, it passes through a lake.