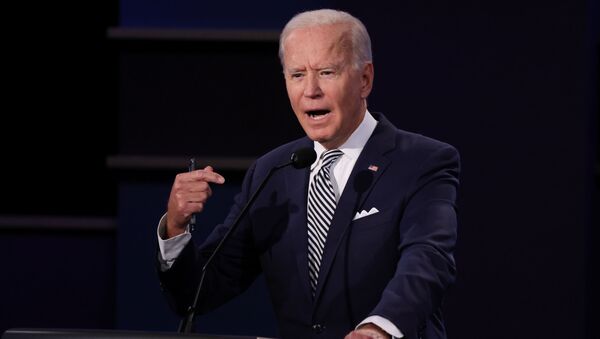 Lilia Dergacheva
All materialsWrite to the author
The first presidential debate in the run-up to the 3 November vote has been portrayed as nothing but a chaotic and extremely fierce showdown, with both camps expectedly claiming victory.

US Democratic Party presidential hopeful Joe Biden said Wednesday that Americans would not stand by if President Donald Trump loses the vote to him and refuses to step down, a day after Trump refused to say whether he would accept the results of the upcoming November poll.

“The president will step down. The American people will not stand for it. No agency would stand for that happening,” Biden said at a campaign stop in Ohio.

The former vice president went on to denounce a right-wing group that Trump declined to comment on during Tuesday night’s first presidential debate, arguing:

“My message to the Proud Boys and every other white supremacist group is: cease and desist.”

Tuesday’s 90-minute face-off held in Cleveland, Ohio, was the first of three presidential debates, with the second and third ones slated for 15 October and 22 October at the Adrienne Arsht Center for the Performing Arts in Miami and Belmont University in Nashville, respectively.

The greatly anticipated presidential debate was described by pundits as one of the most fierce and chaotic pre-election exchanges in history. As usually happens, both sides of the aisle claimed ultimate victory, while a lot of criticism from both parties was voiced against the debate’s moderator, Fox News anchor Chris Wallace. While Biden was apparently frustrated with Wallace's failed attempts to rein in Trump's interruptions, POTUS believed he was not moderating, but rather attacking him, along with his Democratic rival.

"Two on one was not surprising, but fun," he wrote in a string of morning-after messages that described Biden's performance as a losing one.

"Nobody wants Sleepy Joe as a leader, including the Radical Left (which he lost last night!)," he wrote.

In his messages, however, Trump did not address the issue that his opponents found particular fault with last night: his refusal to deliver an explicit rebuke of right-wing groups, including the Proud Boys.

"Proud Boys? Stand back and stand by," Trump said, turning the question back to what he calls “far-left extremists”:

"Somebody's got to do something about Antifa and the left."

In the wake of the face-off, the US media summed up that if anyone was the loser of the debate it was the American public. The Wall Street Journal described the event as a "depressing spectacle" filled with "interruptions and insults", while CNN called it an "absolutely awful debate". Beyond the US, The Times in the UK wrote as follows:  "The clearest loser from the first presidential debate between Donald Trump and Joe Biden was America." The French newspaper Libération described Tuesday's debate as "chaotic, childish, gruelling", and Le Monde agreed, calling it a "terrible storm".