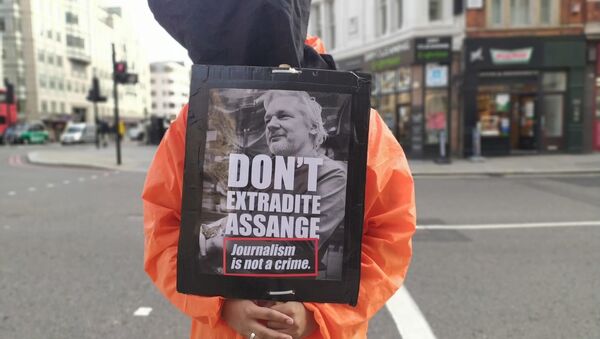 Mohamed Elmaazi
All materialsWrite to the author
The Old Bailey heard shocking details of extensive audio and visual surveillance of the WikiLeaks publisher along with all of those with whom he had contact as part of what is believed to be a CIA-directed operation whilst Mr Assange was under the protection of the Ecuadorian Embassy.

US government directed surveillance of the Ecuadorian Embassy and Julian Assange considered the WikiLeaks publisher's legal team to be "priority targets", the Old Bailey heard on 30 September 2020.

The shocking revelations were made via two anonymised affidavits which were summarised by the defence in Mr Assange's extradition hearing. Two former employees of private security firm UC Global blew the whistle on what they believed to be unethical and unlawful activities directed towards Mr Assange and those around him, conducted on behalf of US intelligence, at a time when they were meant to be providing security for Mr Assange and the Ecuadorian Embassy. Both ex-UC Global employees are participating in criminal proceedings in Spain, brought against the CEO of UC Global David Morales. Their identities have remained secret further to the Spanish court's direction, which has been supported by Judge Vanessa Baraitser in Mr Assange's case, on the basis that the anonymity orders are providing the whistleblowers protection from potential retaliation.

Although UC Global, a small firm with next to no clients, had originally been given the contract to protect the Ecuadorian Embassy in 2015, things would dramatically change, the court heard, after Mr Morales visited a security sector fair in the United States.

"After his initial travels to the Unites States, UC Global obtained a flashy contract, personally managed by David Morales, with the company Las Vegas Sands, which was owned by the tycoon Sheldon Adelson, whose proximity to Donald Trump is public knowledge (at the time Trump was the presidential candidate)," the first witness says in their affidavit.

However, according to the witness, who at one point held a 50 per cent stake in UC Global, "The contract did not make sense because its purpose was to provide  security to the luxury boat that belongs to Sheldon Adelson, [...] during the short period during which it found itself in Mediterranean waters. But the most striking thing about it was that the boat had its own security, which consisted of a sophisticated security detail".

The first witness explains that David Morales, though being added to the security complement of the boat for "a very short period of time" he would receive "an elevated sum".

Both witnesses describe Mr Morales telling them that UC Global would not be working in the "premier league" as they had "switched over" to "the dark side", the latter of which is the expression Mr Morales is said to have explicitly used in referring to the US authorities. “[T]the Americans will get us contracts all over the world”, Mr Morales reportedly told his staff.

After President Donald Trump was sworn in as president in January 2017 UC Global was subjected to a "vetting" system the second witness, who is an IT expert, says. "The people vetting are our friends in the USA”, Mr Morales allegedly told them.
Following Mr Trump's ascendency to the US presidency the witnesses note a dramatic shift in their activities. Although they were originally hired to provide protection to the family of the former president of Ecuador in 2015 and security for Mr Assange and the embassy in London, they found themselves treating Mr Assange and all those who associated with him as targets to surveil rather than assets or clients to protect.

Special stickers were placed on the Embassy windows because, as the second witness later discovered, laser microphones being used by the US from across the building were unable to hear inside the embassy due to vibrations from a white noise machine Mr Assange started to use. As the WikiLeaks publisher, who himself is an expert technologist, started to take measures to protect the confidentiality of his conversations with visitors, including his lawyers, steps were taken by UC Global to circumvent these measures. Microphones were placed underneath the place holder for fire-extinguishers and a microphone was even placed in the women's toilet because Mr Assange started to have his privileged lawyer-client conversations in there.

At various points the second witness says they challenged Mr Morales regarding the ethics and legality of various actions, sometimes successfully. But ultimately Mr Morales insisted that he was the one who was aware of the details of his contract and that he would accept responsibility for any future issues.

By the end, a system was set up so that there was a live audio and video feed which could be viewed by people in the United States. The second witness says that they tried to undermine the request for the live feed to be set up, as it "alarmed him greatly", by telling Mr Morales that it would not be possible.

"David Morales continued to insist that we must proceed to open the circuit “for the Americans”, and soon after Morales emailed me a Powerpoint document. This document was in English and contained instructions in minute detail of how to capacitate the system for remote access via streaming. Obviously, Morales did not have such technical knowledge, so the document must have been supplied by a third party. I suspect that it could have been US intelligence, given that it was in English", the second affidavit says.

The witnesses say they have evidence, including audio visual recordings and pictures, to substantiate their allegations.

The legal team are 'priority targets'

According to the affidavit, the targeting and violation of lawyer-client confidentiality by UC Global, on behalf of the US government, was not incidental but key to their operations.

"David Morales also indicated that the aim was that the surveillance, control of information and recordings should focus on the meetings of the asylee, especially those in which he was meeting with his lawyers, who were priority targets, so the security personnel that were physically deployed in the embassy were specifically asked to monitor these meetings of Assange with his lawyers, as this was required by our “US friends”. Morales always ended these instructions commenting that he was the only one who had full knowledge of the contract and who knew the measures that were necessary to take in order to fulfil it", the second witness explains.

One of the "priority targets" was well-known Spanish lawyer and former judge Baltasar Garzon who directed Mr Assange and WikiLeaks' international legal affairs.

"Morales subsequently stated that gathering information on Garzon should be prioritised, the security guards at the embassy were requested to search for evidence of travels to Argentina and Russia in Garzon’s passport pages, which were photographed", the witness explains.

The witness also recalled that at the end of November 2017 "David Morales told the company workers that the Americans were very happy with the information that we had supplied, but that they would need more". Mr Morales therefore discussed the possibility of entering Mr Garzon's legal offices in Spain, with his staff. "Two weeks after this conversation, the national media reported that men in balaclavas had entered Garzon’s law offices".

The second witness continues explaining that:

"All the requests of surveillance, following and capturing communications in relation to Baltasar Garzon, came from the Americans, according to David Morales. Garzon was a primary objective because of the fact that he was Julian Assange’s defence attorney."

The defence have argued that the case against Mr Assange is politically motivated and that a change in government from the administration of Barack Obama to that of President Trump is what resulted in the current prosecution and extradition request being improperly brought against the multiple award-winning journalist.

Around December 2017, Mr Morales told his staff that "the Americans were desperate" to put an end to Mr Assange’s presence in the embassy, including by taking "more extreme measures" such as leaving the embassy door open so that he could be kidnapped or "even the possibility of poisoning Mr. Assange". "All of these suggestions Morales said were under consideration during his dealing with his contacts in the United States", according to the witness.

Ultimately both witnesses departed UC Global and blew the whistle by contacting various parties to inform them that they had been the target of a highly sophisticated US-directed espionage programme.

Fidel Narvaez, ex-counsel to the Ecuadorian Embassy, was explicitly mentioned in one of the witness statements as a target for the company: "at the end of 2017, the company learned Mr. Assange would receive a diplomatic passport from Ecuadorian authorities, with the aim of leaving the embassy to transit to a third state. I recall that the security personnel of UC Global deployed at the embassy were closely monitoring the then Consul of Ecuador, Fidel Narvaez, who was in charge of the relevant documentation with which he entered and exited the embassy."

Mr Narvaez told Sputnik outside the Old Bailey that he was "very, very angry" when he discovered about the surveillance, but also "very worried" for Mr Assange. "He was enjoying political asylum. That means he was under the protection of my country. And to learn that despite of that protection he was [a] victim of espionage, by the Americans, by the very same people we were protecting him from, it was shocking".

Mr Assange faces to up to 175 years in prison if he is convicted of all of the charges levied against him in the US. The indictment almost entirely relates to his role in publishing the Iraq and Afghanistan war logs, Guantanamo Bay detainee files and diplomatic cables that revealed war crimes as well as other criminality and abuse committed by the US government and US-backed forces around the world.

Although the hearings were initially expected to end on Friday the case may end up wrapping up one day early as a substantial number of witness statements have been read into court following agreement by the parties.