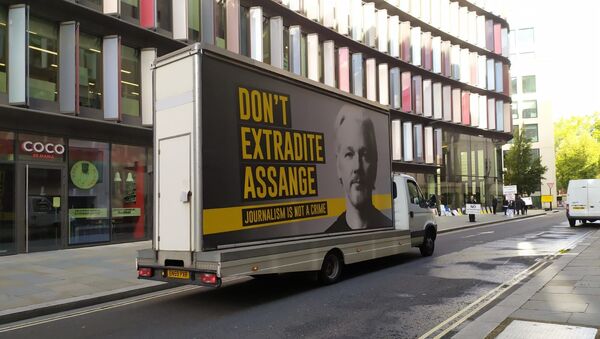 © Photo : Mohamed Elmaazi
Subscribe
LONDON (Sputnik) - US linguist and philosopher Noam Chomsky on Wednesday told the UK court deciding on the extradition of WikiLeaks founder Julian Assange to the United States that the whistleblower has performed an enormous service to the people by revealing information the US government wanted to keep secret.

"In my view, Julian Assange, in courageously upholding political beliefs that most of us profess to share, has performed an enormous service to all the people in the world who treasure the values of freedom and democracy and who therefore demand the right to know what their elected representatives are doing", Chomsky said in a written statement read by Assange’s legal team at the London Criminal Court.

According to Chomsky, the US government has categorized the whistleblower’s actions as criminal because they exposed "power to sunlight", and may cause it "to evaporate if the population grasp the opportunity to become independent citizens [of] a free society rather than subjects of a master who operates in secret".

On day 17 of the hearing that resumed on 7 September after six months of delay due to the COVID-19 pandemic, the UK court also heard testimonies of two witnesses who used to work for the Spanish security company hired by the Ecuadorean embassy in London after Assange had taken refuge there.

Both former employees of UC Global testified on condition of anonymity that the firm director, David Morales, gave them direct orders to spy on Assange and his lawyers and record all their conversations.

According to one of the witnesses, the spying began after Morales attended in July 2016 a security sector trade fair in Las Vegas, where he signed a "flashy contract" with the Las Vegas Sands company, owned by Sheldon Adelson, a US tycoon with close links to US President Donald Trump.

After his trip, Morales gathered the employees at the firm’s headquarters in Spain's Jerez and told them that "from now on" UC Global would be playing "in the big league", the witness added.

The second anonymous witness argued that after Trump won the US presidential election in 2016, the collection of information on Assange intensified "as Morales became more obsessed with obtaining as much information as possible".

'I Had Convinced Myself That They Were Ok' Ex-Prison Warden Tells Assange Hearing on Detainee Regime
Spanish lawyer Baltasar Garzon, who is part of Assange’s legal team and was among the persons spied on by UC Global during his visit to the Ecuadorean embassy, has filed a criminal complaint against Morales at a Madrid court for violating the privacy of his client and passing the information to the US.

Assange’s extradition hearing is due to close on 2 October, but the decision on whether the WikiLeaks founder will be sent to the United States will not be made until after the US presidential election on 3 November, or possibly next year, since the judge presiding over the case granted the whistleblower’s legal team another four weeks to submit the closing arguments and a further two weeks to the prosecution for a reply.