'We Are About to See Voter Fraud on a Level That Will Surpass All Others in 2020', Activist Says 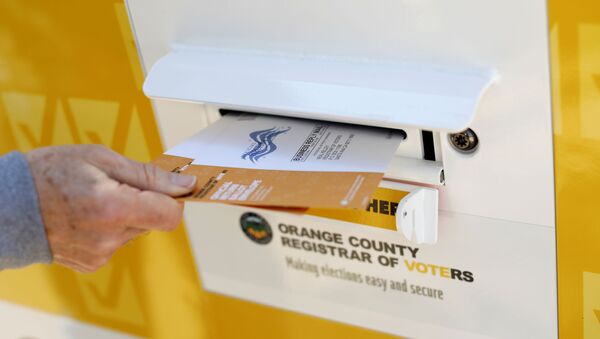 The continuing novel coronavirus pandemic has led to an unprecedented number of requests for mail-in voting to avoid the risk of infection at polling stations, and some states have ruled it mandatory. President Donald Trump has repeatedly expressed concerns that the system may equally offer opportunities to fake or dispute the election outcome.

Mindy Robinson, a conservative activist, political commentator, host of Red White and F You: Unapologetically Patriotic, has commented on the matter.

Sputnik: The controversy over mail-in ballots seems to be gaining more and more steam. In a press release on Thursday, US Attorney David Freed said that nine absentee ballots were recovered, seven cast for Trump and the other two “resealed inside their appropriate envelopes”, so their contents “are unknown”. What’s your take on the outcome?

Mindy Robinson: Conservatives have seen voter fraud and manipulation from the Left so often, it’s become a joke. Their battle cry in return has always been that "voter fraud is a myth". Clearly it’s not, and the fact it almost always favours Democrats who are against voter ID and anything else that would increase election integrity, is just as telling. I think we’re about to see voter fraud on a level that will surpass all others in 2020... it’s the only way they could ever win at this point.

Sputnik: What do you make of the whole voting by mail system altogether?

Mindy Robinson: Unless you really like wasting tax payer money or intend to cheat... there’s really no “benefit” to mail-in voting en masse. Look at what happened in Nevada during the primary. People who voted for me had their ballots sent back invalid past the date to fix them, other people who tried to vote in person or who were sent the wrong ballot had to wait 5-8 hours in the hot sun uncovered on Election Day to fix it.

The state website got hacked and hundreds of people were deemed invalid to vote, had their parties changed from Republican to Democrat, or like me... had their voting history erased or edited. Now they’ve legalised ballot harvesting here, so all anyone has to do is scoop up all those loose ballots that were everywhere and vote with them. It’s madness how unsecure our elections have become.

Sputnik: The upcoming live debate between Joe Biden and Donald Trump is expected to focus on the economy, among other issues; you yourself have lashed out against the governor of your state, saying that he “is actually patting himself on the back for destroying our state’s economy while blatantly ignoring the quarantine rules for himself and the other big businesses and casinos he’s in bed with”. Can you elaborate on this?

Mindy Robinson: Sisolak’s mandatory quarantine was suspiciously selective, and he kept getting caught breaking his own rules selfishly across town. Mom and pop vitamin stores had to be closed... but weed stores like Medmen were allowed to stay open? Doesn’t help he’s being looked at for campaign fraud for forcing individual Medmen employees to donate to his campaign to avoid donation caps and laws. It destroyed bars and small businesses, but allowed mega-corporations to profit unopposed... and then yes, he disgustingly pats himself on the back for all of it online.

Sputnik: In the meantime, we’ve seen the Democrats attack Trump on economic issues – do you think they are right? Are they winning ground with the electorate this way?

Mindy Robinson: If the Democrats attack Trump about the economy, it’ll be the biggest mistake they ever made. We all just watched how Democrat governors destroyed their own economies and allowed their cities to burn, while red states stayed relatively alive, healthy, and free. Even non-political people started saying that the Dems destroyed the economy just to hurt Trump. It sure didn’t help that they stuffed the stimulus bill meant to help us with their own selfish pork. They’ve managed to turn the people in the middle against them, and they don’t even know because they’re too busy suppressing all the malcontent against them online to see the sentiment.

Trump Calls for Probe Into Ilhan Omar Following Report of Her Allies 'Illegally Harvesting Ballots'
Sputnik: Who do you think will dominate in the live debates?

Mindy Robinson: I mean... as bad as I want to see Trump destroy Biden in the debates, I don’t see how the Left can allow it to ever happen. There’ll be some excuse or other, trust me. Trump is best when he improvises, Biden... will probably eat the microphone at this point.

Sputnik: In one of your latest tweets, you posted that Facebook has again suppressed your content and threatened to unpublish your page of more than 250k patriots because of your opinions, which have been deemed “fake news”. Do you think that the views of conservatives are being marginalised?

Mindy Robinson: I’ve been complaining about biased censorship against conservatives forever, and it’s only gotten worse. They’re labelling everything that goes against their narrative as “fake news”... but if you read “why” they say that, you clearly realise that it’s all word manipulation. For instance, I recently noticed FB labelled Nike losing money for hiring Colin Kaeperdick as “fake news".

When I clicked on it to read “why”, it explained that it’s “old news” and they’ve made all the money they lost back now. Like... that’s not how it works. Something isn’t “less true” because time has passed. But that’s what they do... they don’t even care if it’s obvious election meddling at this point either. No one ever stops them, and the GOP “establishment” doesn’t see the importance of their constituents having a voice and a place to see non-leftist biased news.

Sputnik: How can they fight it?

Mindy Robinson: The only way to fix the blatant censorship of conservatives online is to sue these companies for political discrimination. They’re allowed to make whatever terms of service they want as a private company... but the minute they apply those rules unfairly across the board, then that’s when it becomes discrimination and they need to be held accountable.