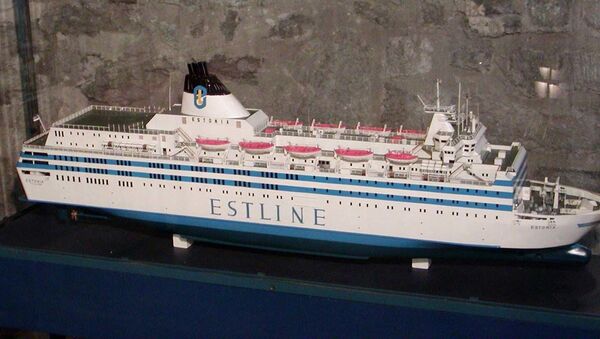 CC BY-SA 3.0 / Stan Shebs / MS Estonia model
Subscribe
Igor Kuznetsov
All materials
The Estonia catastrophe 26 years ago that claimed 852 lives is the worst peacetime tragedy in the Baltic Sea and the second-deadliest peacetime sinking of a European ship, second only to the Titanic.

The foreign ministers of Finland, Estonia, and Sweden have agreed to jointly assess new evidence regarding the Estonia ferry that sank in 1994.

New underwater footage of the shipwreck from a Swedish documentary about the disaster shows extensive damage on the starboard side, including a previously unknown 4-metre hole.

The find has since fuelled renewed speculations and theories about the massive cruise ship's tragic fate.

Margus Kurm, former public prosecutor and former chairman of the Estonian government's investigation into the disaster, suggested that the Estonia probably collided with a submarine, a Swedish one at that.

Based on the new information, Kurm speculated that there could have been a "sensitive consignment" on board the ship that needed to be monitored. The botched surveillance operation was likely performed by a Swedish submarine, he mused in an interview with the Estonian newspaper Postimees, suggesting that Sweden "lied straight to our face". Kurm stressed that 400,000 cubic metres of sand and stone had been transported there and a decision to declare the sanctity of the site was made very quickly in 1995 when the inquiry was still underway.

​Former Estonian Defence Minister Enn Tupp, active when the disaster occurred, also argued that the ship sank after a collision with a submarine, but didn't point out Sweden specifically.

Lars Ångström, a former member of the parliamentary defence committee for the Green Party who has been involved in the issue for several years, believes that the hole was probably caused by another ship, most likely a military one.

However, ex-Swedish Defence Minister Anders Björck has dismissed the claims as "rather incredible". "Had it been so, we would have immediately received a report about it, and it would have been noticed", he told Swedish national broadcaster SVT. He also stressed that it would have taken a huge blackout operation to perform anything like that and then try to hide it.

None of Sweden's other top ministers who in the 1990s were responsible for the Estonia investigation, including Prime Ministers Carl Bildt and Göran Persson, have commented on the matter.

The hole discovered in the hull of the Estonia can be explained in several ways, suggested Jørgen Amdahl, a professor at the Norwegian University of Science and Technology, who ran a computer simulation of the disaster. He dismissed the results of the official 1997 investigation that the sinking was caused by a broken bow visor.

Two other explanations are more likely, Amdahl mused to SVT. One is that the ship was damaged when it hit the bottom. Another possibility is that an object hit the ship from the side with a force of up to 600 tonnes.

Meanwhile, an open letter by Estonia survivors has been published by the daily Aftonbladet, demanding a new investigation.

"It is the Swedish government's responsibility to immediately take the initiative for such a diving operation with full and open presentation of the results to the public and the media in all countries affected by the disaster", they wrote.

Kent Härstedt, survivor and former MP for the Social Democrats, supported the demand for a new investigation as the current one doesn't feel "complete and credible", he said.

"I am not conspiratorial, but with what has emerged today, there will be further questions – why is the hole not included in the official investigation", Härstedt told SVT.

Estonian Prime Minister Jüri Ratas has called for a new Estonian investigation since the findings were presented in a new documentary. He suggested that the new information raises questions that must be answered in a "clear, dignified, and transparent way".

Second Only to the Titanic

The sinking of the Estonia in the Baltic Sea between Sweden, Åland, Finland, and Estonia is seen as one of the worst maritime disasters of the 20th century, second to only the Titantic in peacetime. Some 852 people died in the disaster and only 137 survivors were rescued. The official version has so far been that the bow visor separated and the ship's bow door opened, whereupon it immediately took on a heavy starboard tilt, as water flooded into the vehicle deck.

Based on a suggestion by the Swedish government, thousands of tonnes of pebbles were dropped on the site to bury the whole ship in situ. The subsequent 1995 Estonia Agreement prohibits citizens from the signatory counties to even approach the wreck, which has long fuelled various speculations. The wreck is monitored by radar by the Finnish Navy.