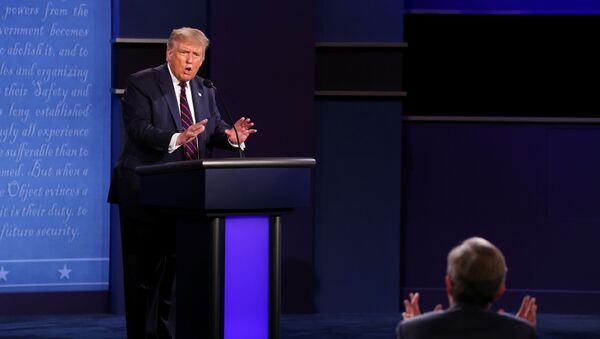 Dhairya Maheshwari
All materials
Among the countries mentioned by the US president, only China has so far been able to check the spread of COVID-19, having declared “victory” over the coronavirus as early as April.

US President Donald Trump accused the governments of India, Russia, and China of hiding the real number of COVID-related deaths as he faced off with Democrat nominee Joe Biden in their first televised debate ahead of the 3 November presidential election.

"You don't know how many people died in India, they don't give you the straight numbers." - US President @realDonaldTrump#COVID19 pic.twitter.com/JpCFbKnYfn

“But if you look at what we have done, I closed it and you said 'he was xenophobic. He is a racist and he is xenophobic'. Because you didn't think that I should have closed my country... Because you thought it was terrible. You wouldn't have closed it for another two months. By my closing it, in fact Dr Fauci said that President Trump saved thousands of lives...” the US president added.

The 77-year-old Democratic nominee has been critical of the Trump administration’s policy to deal with the pandemic. “How many of you got up this morning and had an empty chair at the kitchen table because someone died of COVID?" Biden questioned.

Earlier this month, Biden accused Trump of not doing a "damn thing" as far as his administration’s coronavirus response was concerned. The remarks by the presidential hopeful were made during an interview with CNN.

This wasn’t the first time that Trump took recourse to comparing COVID-related statistics in other major countries. In August, Trump alleged that India had a "tremendous" problem when it came to dealing with COVID-19 pandemic. In June, the US president reportedly claimed that India and China would return more infections than the US only if the two Asian giants tested more people.

According to Johns Hopkins University, the US has reported 7.19 million coronavirus cases to date. India, the second-worst hit country, has recorded 6.14 million COVID-19 infections. While Russia has the fourth highest number of COVID cases globally (1,167,805), its caseload is just one-sixth of India's.

Amid continued allegations of suppressing data on the spread of COVID, India’s federal Health Ministry has said it maintains full transparency. "As far as India is concerned, we are 100% transparent", Luv Agarwal, the joint secretary at India’s Ministry of Health and Family Welfare (MoHFW) said at a government press briefing in March.

Back in May, The New York Times released an article titled "A Number Defies Propaganda: 1,700 Extra Deaths in Moscow", in which the author looked at the mortality rate in Moscow in April over the past five years to derive the average and claim that it is 1,700 fewer than the number of deaths recorded in April of this year.

The original article, coupled with another similar one published by the Financial Times approximately at the same time, was debunked by the Russian Foreign Ministry as well as health authorities, who pointed out that the allegations are completely unfounded.

Head of Moscow Healthcare Department Alexey Khripun said at the time that the authorities were performing an autopsy in every single case and were, therefore, confident in the accuracy of their data. In particular, Khripun insisted that only 639 of a total of 11,846 deaths recorded in Moscow in April were attributable to COVID-19.

Chinese authorities have also repeatedly blasted allegations of downplaying the death toll or the actual caseload, with Xi Jinping stressing that the country has been transparent, responsible, and prompt in its response to the coronavirus and sharing information with other countries.