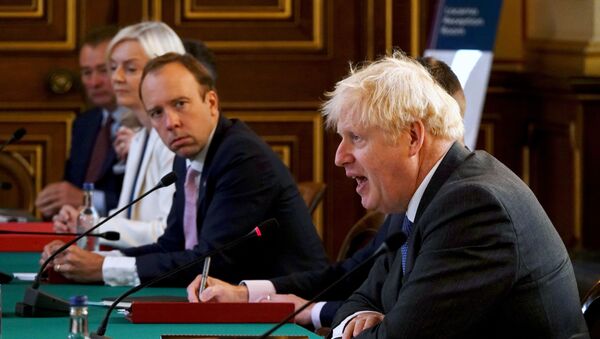 Political website Guido Fawkes claimed up to 80 Conservative Party MPs could vote with the opposition for an amendment to the Coronavirus Act that would require Parliamentary approval for any new coronavirus pandemic measures.

At least 55 Tory MPs are backing the Brady amendment to give Parliament the final say on any new COVID-19 pandemic measures - and may win.

On Tuesday The Conservative Home website published a list of the Tory rebels, along with 13 opposition MPs who have signed Sir Graham Brady's amendment to the Coronavirus Act passed in March.

ITV political editor Robert Peston tweeted on Monday that he expected Health Secretary Matt Hancock to announce a compromise in Parliament on Wednesday "to give MPs a prior vote on national coronavirus measures, except in an emergency, when the vote would be a few days after imposition."

Tory Revolt Over Coronavirus Laws Expected to Be Ignored Despite Calls for Greater Scrutiny by MPs
That contradicted ​a report in the Guardian that Speaker Sir Lindsay Hoyle would simply refuse to allow the change to the legislation to be debated.

Political gossip site Guido Fawkes said the number of Tory MPs supporting the bill could be as high as 80.

Democratic Unionist Parliament chief whip Sammy Wilson and Ian Paisley Jr were among three DUP MPs supporting the Brady amendment, along with Julian Lewis, the Eurosceptic Tory who had the whip withdrawn in July.

Prime Minister Boris Johnson's government has only just headed off a rebellion by some 30 MPs against its Internal Market Bill, which would make unilateral changes to last year's European Union Withdrawal Act in case deadlocked talks towards a post-transition period trade deal fail.