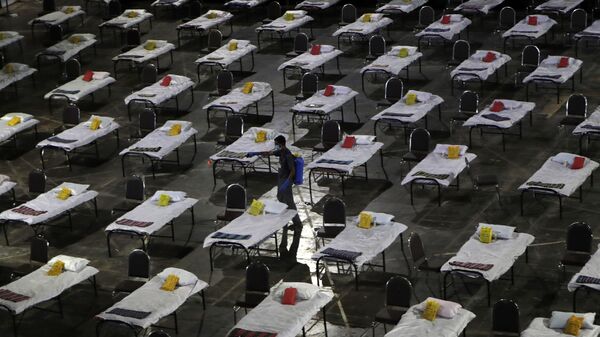 Subscribe
The pandemic continues to spread across the globe, reaching 33,200,000 infected worldwide, according to Johns Hopkins University. The highest number of confirmed cases has been registered in the United States, followed by Brazil and India.

New outbreaks of the coronavirus are hitting Latin America and Europe, forcing nations to return to harsher pandemic restrictions. In Europe, where the UK and Spain are the main centres witnessing an uptick in COVID-19 cases, countries have introduced a ban on mass events and obligatory mask-wearing in public places, as well as travel restrictions and quarantine measures.

MOSCOW (Sputnik) - Moscow's COVID-19 death toll has risen by 27 over the past day — the highest single-day figure since July — to 5,230, the Russian capital’s coronavirus response centre said in a statement on Tuesday.

"Another 27 patients, who were diagnosed with pneumonia and tested positive for the coronavirus infection, died in Moscow", the centre said.

On Monday, the single-day increase to the death toll was 23.

"One million people have now been lost to COVID-19 and many more are suffering because of the pandemic. This milestone is a difficult moment for the world but there are glimmers of hope that encourage us now and in the near future",  World Health Organisation (WHO) Director-General Tedros Adhanom Ghebreyesus said in a statement released by the UN health agency.

The WHO chief said Thailand, Italy, Uruguay and Pakistan among other counties had managed to suppress transmission of the deadly virus through various public health measures.

"[N]o matter where a country is in an outbreak, it is never too late to turn things around", Tedros said.

He went on to say that countries and societies need to take four steps to contain outbreaks, namely avoiding events that could amplify transmission, protecting vulnerable groups of population to reduce deaths, adhering to public health measures such as physical distancing and mask wearing, as well as testing and contact tracing.

"While today’s milestone gives us pause for reflection, this is a moment for us all to come together, in solidarity, to fight back against this virus. History will judge us on the decisions we do and don’t make in the months ahead. Let’s seize the opportunity and bridge national boundaries to save lives and livelihoods", Tedros underlined.

The United Kingdom reported on Tuesday 7,143 new COVID-19 cases, which is the highest daily number since the start of the pandemic, and 71 new deaths, according to the Department of Health and Social Care.

Professor Walter Ricciardi, a scientific adviser to the Italian health minister, on Tuesday, said it was incorrect to talk about an alleged second wave of the COVID-19 pandemic, as the first had not subsided yet.

"There is no second wave because the infection cases have failed to reach zero, and now their number has once again started growing in the country, just as we assumed ... In reality, the first wave has not been over," Ricciardi told the Sky TG24 broadcaster.

The professor noted that the country had managed to straighten the epidemiologist curve, which went up due to factors like people's behaviour during this summer and first autumn chills.

"So, we can only call it the second wave if we mean a change of seasons but it is the same pandemic," Ricciardi added.

The daily infection rate in the country stood at 200-300 in June and July. However, in late July the number of daily new cases began to go up, exceeding 1,000 starting August 21. Throughout September, the average rate has been at 1,500 a day.

The German government will make a proposal to the country's federal states to strengthen social distancing measures to curb the spread of COVID-19 amid a steady rise in new cases in the European country, the Deutsche Presse-Agentur agency reports on Tuesday, citing an internal government document.

According to the agency, the proposal to introduce new measures will be discussed during a scheduled meeting between Chancellor Angela Merkel and the heads of Germany's regional governments this coming afternoon.

Merkel will recommend establishing a limit of 25 people for private meetings, and 50 for public events, the agency said. Additionally, bars, restaurants, and recreation facilities must continue to collect the information of clients, and fines of 50 euros ($58) for supplying incorrect information may be levied, according to the agency.

The measures have been proposed for regions that have a seven-day incidence of 35 new cases per 100,000 residents, the agency said.

MOSCOW (Sputnik) - Moscow Mayor Sergei Sobyanin on Tuesday announced that school holidays would be extended to two weeks starting 5 October because of the surge in COVID-19 infections.

"Following the recommendations of doctors and taking into consideration the fall surge in cold-related diseases and the surge in recorded COVID infections, I have made a decision to extend the fall school holidays to two weeks and hold the vacation simultaneously in all the schools, from 5-18 October", Sobyanin wrote in his blog.

Apart from that, further education establishments and recreational facilities for children that are in the jurisdiction of the Moscow government will suspend operation for two weeks.

"The decree that we issued for the first month of selective isolation with responsible individual distancing will be extended for the whole of October", Duque said in a televised statement.

The health emergency will be in effect in Colombia until 30 November, however the latest figures on the coronavirus situation are encouraging, according to Duque.

On 1 September, a mandatory isolation regime was replaced by selective isolation, distancing, and individual responsibility. It aims to isolate suspected coronavirus carriers or those who have been in contact with infected people and allow others to move freely.

"Our world has reached an agonising milestone: the loss of one million lives from the COVID-19 pandemic. It’s a mind-numbing figure. Yet we must never lose sight of each and every individual life. They were fathers and mothers, wives and husbands, brothers and sisters, friends and colleagues. The pain has been multiplied by the savageness of this disease", UN Secretary-General Antonio Guterres said in a statement.

"And still there is no end in sight to the spread of the virus, the loss of jobs, the disruption of education, the upheaval to our lives. We can overcome this challenge. But we must learn from the mistakes. Responsible leadership matters. Science matters. Cooperation matters - and misinformation kills", he said.

000000
Popular comments
If all of them of that million had died from (but not "with") COVID, in most cases in the age of 70+, it would've been just 0.0013% for the period of almost 9 months. Pandemic!? It's the scamdemic that obviously proves humans as sheeple that could be easily manipulated just about anything.