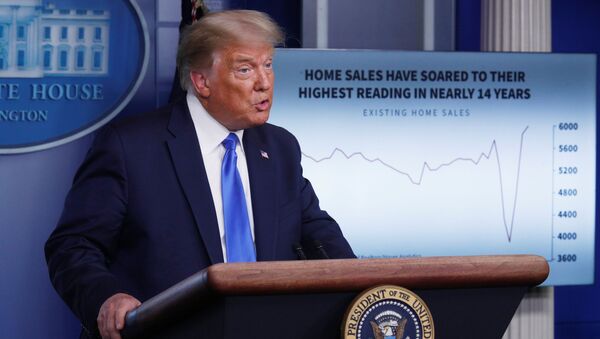 Max Gorbachev
All materialsWrite to the author
Commenting on the issue, White House spokesperson Sarah Matthews said Trump consults with many health experts both inside and outside the federal government, who sometimes have different opinions on how to deal with the coronavirs outbreak.

Dr Robert Redfield, director of US Centres for Disease Control and Prevention, is allegedly concerned that one doctor has been providing President Donald Trump with misleading information about the coronavirus outbreak in the United States, CNN reported, citing an unnamed federal official. The doctor in question is Scott Atlas, who recently became a member of the White House Coronavirus Task Force.

On 27 September, NBC News reported that the head of the CDC was overheard talking about Scott Atlas during a phone call. "Everything he says is false", Dr Redfield said as cited by NBC News. According to the network, the director of CDC is alarmed that Trump is sharing incorrect information provided to him by Dr Atlas with the public. The misleading information includes herd immunity, whether young people are susceptible to the virus, and questioning the efficiency of wearing masks.

Dr Redfield then acknowledged that he was talking about Dr Atlas. However, a CDC spokesman later said that NBC News was "reporting one side of a private conversation" by Dr Redfield. That same day the CDC apparently tried to smooth things out. The agency subsequently issued a statement saying that while the two have "different positions" on some issues, there are many things both doctors agree upon.

"The article quotes Dr Redfield as saying 'Everything he says is false' but it cannot supply the context for that statement since only one side of the private conversation being eavesdropped on was heard. Positions on three issues, the value of wearing a mask, youth COVID-19 infections, and where we are currently with herd immunity, are the positions that Dr Redfield has different positions on than Dr Atlas", the CDC said in a statement.

A federal health official told CNN that the CDC director’s comments about Dr Atlas are "accurate".

Daniel Lazare, an American journalist and author, also believes that the reports of deep dissension at the CDC seem to be accurate.

"What we're left with, consequently, is pluralism at its worst, a situation in which administration officials can't get their story straight and wind up saying different things at once.  With the official line constantly shifting, the public is left confused and skeptical while scientists are afraid to speak out for fear that higher-ups will slap them down because their message is not politically opportune. It's hard to imagine a worse response", Lazare elaborates.

The journalist says that the big question is why this is happening. According to Lazare, Trump, "a man who knows next to nothing about science", likes medical experts like Atlas who tell what he wants to hear, "i.e. that everything is under control, that opening up schools and colleges is no problem, and that masks and social distancing are unnecessary because herd immunity will solve everything".

"But for those who study US government, it's clear that the problem is also structural. The political system is fragmented and divided and Americans are taught to be suspicious of government as something inherently tyrannical. Unlike other countries, therefore, it was apparent from the start that the US would not be able to come up with a central scientific authority whom people would listen to and trust.  It's simply beyond the system's capabilities. So the pandemic is adding to a growing American crisis that is structural at its core", Lazare explains.

Who is Dr Atlas?

Scott Atlas, a neuroradiologist and a healthcare policy expert, joined the White House Coronavirus Task Force in August. Prior to this, he frequently appeared on Fox News where he expressed views on the coronavirus that aligned with Trump’s. He spoke against lockdowns as a measure to curb the spread of the disease and privately advocated for herd immunity.

"It’s important for people to understand the medical science to know that natural human immunity of populations that is sometimes called herd immunity, it’s very important that that develops. That’s how viruses are eradicated", Atlas said in March.

In response to the reports by CNN and NBC News Atlas said the following:

"I have never, literally never, advised the President of the United States to pursue a strategy of herd immunity, of opening the doors and letting people get infected. I have never advised that, I have never advocated for that to the task force, I have never told anybody in the White House that that's what we should be doing".

Commenting on the matter, White House spokesperson Sarah Matthews said Trump consults with many health experts both inside and outside the federal government, who sometimes have different opinions on how to deal with the outbreak.

"He [Trump] then makes policy decisions based on all of the information to save lives and safely reopen the country. Everyone, including the president, recommends wearing a mask when you cannot social distance", Matthews said.

The development comes as last week the United States, which has the highest number of cases (7.1 million) saw its death toll surpass the 200,000 mark. Dr Anthony Fauci, America's leading expert on infectious diseases, said the country is reporting an "unacceptably high" number of new infectious every day. He stressed that many states have seen an uptick in hospitalisations, which could lead to more deaths. Donald Trump said that the government doesn’t plan to impose lockdowns to curb the spread of the disease.