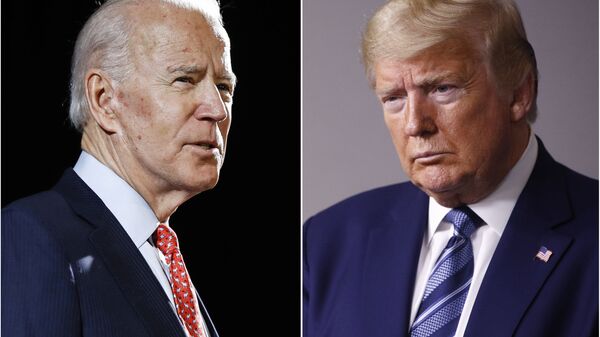 © AP Photo
Subscribe
Ahead of the first US presidential debate on Tuesday, China warned American politicians not to use the “China problem [to] create drama,” the South China Morning Post (SCMP) reported, citing commentary by the state-run People's Daily, the largest newspaper group in China.

“It is already an expected plot that the US presidential election will create talks about a ‘China threat’ in order to emphasise the need to ‘protect US benefits.’ It has been so since the Cold War ended,” read a Tuesday People’s Daily article referenced by the SCMP.

“Some US politicians in office have shockingly expressed their hopes for clashes. They have put up a show to shift the focus and make conflicts [that the country faces] look like an external issue,” the commentary said, without explicitly referring to US President Donald Trump’s administration.

“This is not only unhelpful in solving the systemic risks that the US society is facing, but also creates destruction in the arena of international relations … China will not give up its own benefits to play the game of the US elections; US politicians should stop dragging China in to their domestic issues,” the article added.

Both Trump and Democratic presidential nominee Joe Biden have promised to enact policies antagonistic to Beijing if elected. In addition to launching a trade war with China in 2018 and hiking tariffs on more than $300 billion worth of Chinese exports, Trump has repeatedly accused China of covering up the COVID-19 pandemic when it first broke out in the country in late 2019. In addition, Trump has accused the country of engaging in unfair trade practices that include stealing American intellectual property.

During an election rally in Dayton, Ohio, on September 21, Trump claimed that if “Biden wins, China wins.”

“If we win, Ohio wins and most importantly, in all fairness, America wins,” the president stated, Time reported.

Back in April, Trump told Reuters that China “will do anything they can to have [him] lose this race,” adding that he believes Beijing wants Biden to win, an assertion that the president has repeatedly reiterated.

Last Wednesday, Biden also confirmed that he will confront China in various ways if elected.

“I will be firm on China’s violation of human rights, militarization in the South China Sea and a whole range of things. Recent analysis points out that China knows I will be straight, but they are also worried that I will be tough. I make no excuses for that, none whatsoever,” Biden said last week.

Without specifically referring to the US, Chinese Foreign Minister Wang Yi said during a forum in Beijing on Monday that “some certain country turned the solemn international venue of the UN into a performance space for serving their own politics and self-interest,” the SCMP reported.

During the virtual 75th session of the United Nations General Assembly last week, US President Donald Trump lashed out against China in a speech. “We have waged a fierce battle against the invisible enemy: the China virus … We must hold accountable the nation which unleashed this plague onto the world,” Trump said at the event.

Tensions between the US and China have also increased over the last month due to military drills and patrols in highly contested areas including the Taiwan Strait and the South China Sea. This week, China conducted naval drills near the South China Sea, for the third time this year.