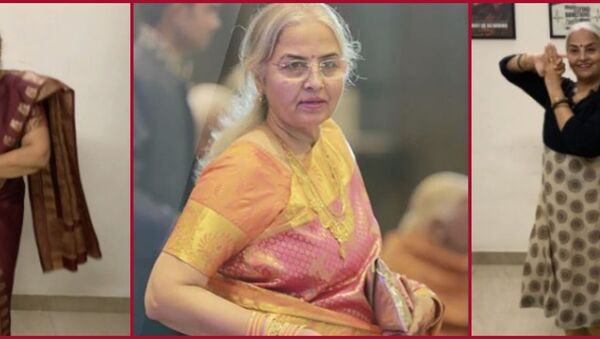 Radhika Parashar
All materialsWrite to the author
After having raised kids and taken care of families in the first half of their lives, most women used to be too burnt out to try new hobbies, especially after 50. Now, however, many women around the globe have realised that with age they don’t get older, they get better.

Having dealt with the sugar, spice, and everything nice that life has had to offer so far, Ravi Bala Sharma, a 62-year-old epitome of grace who resides in India’s tinsel town Mumbai has decided to “dance her way” through the rest of her life. She has taken it upon herself to inspire fellow boomers that ageing can be as fine as wine also, far from the cribbing against body aches.

Sharma recently made it to the headlines after Bollywood pop-singer Diljit Dosanjh shared one of her videos dancing to the songs from his latest chartbuster album. Sharma’s fluid moves complementing Dosanjh’s infectious Punjabi track made the singer’s day, as he noted on his Instagram post.

Dosanjh’s post garnered thousands of reactions on Instagram, with people shouting out to the “dapper dressed” Sharma for being “inspiring” at an age most people decide to enter the slow lane of life.

Sputnik reached out to this 62-year-old bundle of energy to find out how she made her way into the digital playground of millennials and inspired a volcano of attainable aspirations that some Indian women lose touch with, as they're overwhelmed with work and family issues.

Born in India’s “Brass City” – Moradabad to a “musically inclined” father in 1958, Sharma spent her childhood acquiring the nuances of classical Indian singing from her father, Shanti Swaroop Sharma. She went on to study music in college and in 1993 after her marriage, took up a job in a Mumbai school as a music teacher. Last year, she retired after 27 years of service.

Navigating through the extra free time that working women are not usually accustomed to, Sharma was thinking of ways to make good use of her time when an inspiration came to her in June of this year.

“I saw my younger sister putting up a dance video on Facebook. So I got motivated from her and asked my son to record one for me to put up on Facebook, but he being a young generation excited soul, made me an account on Instagram where I uploaded the first video of me performing a classical Indian dance. The responses were ecstatic", Sharma told Sputnik.

In no time, Sharma’s videos began catching the eyes of news channels and within three months of posting her first dance video, she became a “social media influencer” with nearly 40,000 followers.

We all have our mantras we live by and in Sharma’s story, the popular phrase “age is just a number” emerged as the spell that resonated best with her larger-than-life persona.

“Age is just a number because we humans can do anything, anytime and at any age. Our mind is very clever, it tells us that, this is maybe not the right age to do this or do that. But we need to first tell ourselves that the number of years we have lived cannot confine us", Sharma said reiterating that it’s never too late to pursue your passion.

Two extremely important elements of finesse in Indian classical dances are – eye expressions and emoting words through hand formations. As noted by Instagrammers commenting on Sharma’s videos, the dancer has a precise grasp of both these requirements and that’s what makes her art all the more glittery.

Today, videos of Sharma gracefully dancing to iconic Bollywood numbers have gone viral on social media in India. Her elegant sense of dressing up adds to the panache with which she flicks her long locks while swooning to the poetic lyrics of Indian songs.

Speaking like a true mother and family woman, Sharma said whatever she is wouldn't be possible without the support of her family who encouraged her to chase her dreams throughout her life. In fact, a piece of advice she could now give her younger self, according to Sharma, would be not to let another day slip away without singing and dancing.

“My family is very supportive. My mother-in-law was very proud of me when she was alive. I really miss her. Even my husband was very enthusiastic about my dance and my tabla-playing. He used to cheer me up whenever I used to play in school competitions and on family occasions. My kids are very supportive and all the relatives keep calling me up and ask about my new dance videos and interviews", Sharma said, gleaming with the love she gets from the people around her.

Citing examples of elderly women roping in appreciation on social media for their talents and skills all over the world, Sharma appears to have experienced a sense of liberation from traditional and physical norms.

She also revealed that some young kids have dropped comments under her videos advising her to go “read some book” or to “spend quality time with god” – because while Indian society is broadening its mentality, years of toxic social conditioning will take time to be completely eradicated.

“I want this sense of liberation to be normalised for each and every lady, young or old. I am hoping that the true sense of equality soon reaches to our youth to its fill capacity. I want to tell our men to encourage their mothers, wives, sisters, daughters, and daughters-in-law to follow their passion. It is their right. Be proud of what they are doing in life and just support them", Sharma said, subtly smashing the toxic ideals of orthodox patriarchy.

To the women out there, Sharma has offered some golden words of wisdom.

“Focus on your careers first. Just follow your passion, stick to it, work hard and trust the process. Don't take temporary decisions for small time happiness. Think about your future and your family. We like to go out and chill with friends and all. It’s all fine but when you come back just think about your work and how you should utilise your time more efficiently".

Rupi Kaur, an Indian-born Canadian poet has rightly summed up the exuberance experienced women are capable of exerting.

“How can I leave before the party's started, rehearsals begin at forty. I ripen with age. I do not come with an expiration date and now for the main event, curtains up at fifty. Let's begin the show", Kaur says.