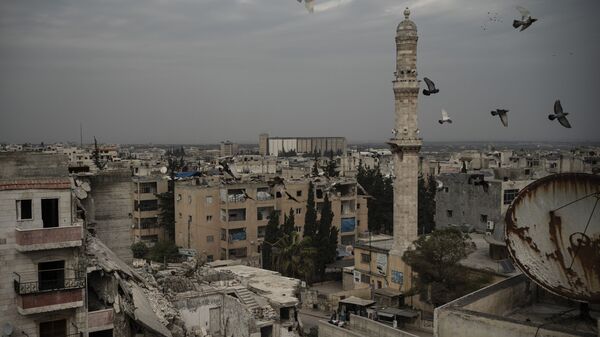 MOSCOW (Sputnik) - Terrorists plan to organise provocations with poisonous substances in settlements in the Syrian provinces of Idlib and Aleppo, Rear Adm Alexander Grinkevich, deputy head of the Russian Centre for Reconciliation of Warring Parties in Syria, said at a briefing.

Idlib remains one of the four de-escalation zones established in Syria in 2017 that is not under full control of the Syrian government.

"The Russian Centre for the Reconciliation of Warring Parties has received information about the next attempt by militants of illegal armed groups to organize provocations using poisonous substances in the southern part of the Idlib de-escalation zone", Grinkevich said.

He noted that the terrorists were planning to stage attacks on the settlements of Beitaroun (Aleppo Province) and Bidama (Idlib Province) with ammunition with toxic substances in order to accuse the Syrian government forces of using chemical weapons against civilians.

"The Russian centre for reconciliation calls on the commanders of illegal armed groups to abandon armed provocations and take the path of a peaceful settlement of the situation in the areas under their control", Grinkevich added.

On Wednesday, the Russian military also said that terrorists in Idlib were planning to stage a false flag chemical attack, in order to accuse the Syrian government forces of using chemical weapons against civilians.