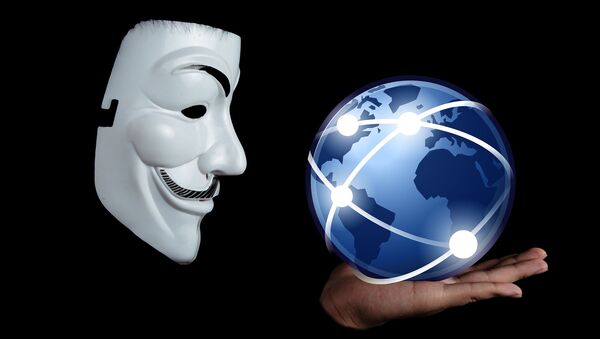 Ilya Tsukanov
All materialsWrite to the author
According to the hacktivist collective, the files provide, for the first time, “a detailed map” on the British intelligence services’ clandestine operations in Syria to fund, arm and provide a sanitized, publicly acceptable media voice to an array of opposition militants and jihadists seeking to topple the Assad government.

Anonymous, the international hacking group behind the 2018 publication of documents detailing the UK government’s Integrity Initiative media manipulation project, has released a new trove of dozens upon dozens of files on a separate, secret project by the British and American governments to handcraft a broad, pro-opposition, anti-Assad propaganda narrative which has since gone on to be used in the majority of Western media coverage on the Syrian conflict.

The files, released under the wordy title “Op. HMG Trojan Horse: From Integrity Initiative to Covert Ops Around the Globe. Part 1: Taming Syria I,” reveal that Western intelligence services and government-hired public relations firms worked directly with major regional Arabic and international news media to weave a false narrative about the Syrian war across an array of platforms.

One of the contractors involved in the project, the Washington-based Innovative Communication & Strategies, is shown to have received funding from the UK, US, and Emirati governments, as well as a group of anti-Assad businessmen, and to have worked to create a vast network of contacts consisting of over 1,600 journalists and “influencers” to push anti-Damascus, pro-opposition information, stories and talking points.

In one document, the PR firm states openly that its work includes “managing and delivering a multi donor project in support of UK Foreign Policy objectives…specifically providing strategic communication support to the moderate armed opposition.”

A second major contractor, Dubai-based ARK F.Z.C., purportedly worked to “soften” the image of jihadist militias, and to promote the White Helmets in the media and online, including running the group’s social media accounts directly and 'raising global awareness' about its operations. 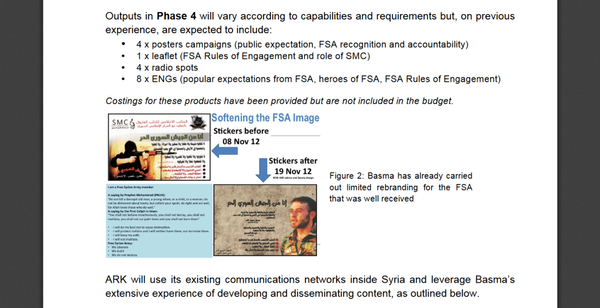 Presentation by ARK showing how the firm plans to work at "softening the FSA Image."
© Photo : Screengrab from files obtained by Anonymous

In one leaked government document, ARK purportedly boasts that it had worked since 2012 to provide “highly effective, politically and conflict-sensitive Syria programming for the governments of the United Kingdom, the United States, Denmark, Canada, Japan and the European Union,” with its efforts including working on the ground with local ‘activists’ and ‘civil society actors’, training them on establishing a “core communications narrative,” providing technical training to camera operators and amateur journalists, spreading opposition materials inside the country and even helping to spark anti-government protests.

Syria War Anniversary: 5 Times Fake News, Videos & Twitter Were Used in Info War
Its work also reportedly included providing support to the leadership of the Free Syrian Army, including assistance in the “'re-branding' of the [FSA] to distinguish itself from extremist armed opposition groups and to establish the image of a functioning, inclusive, disciplined and professional military body.”

In one of the documents, ARK talks up its successes in providing a stream of “regular branded and unbranded content to key pan-Arab and Syria-focused satellite TV channels such as Al- Jazaeera, Al Arabiya, BBC Arabic, Orient TV, Aleppo Today, Souria al-Ghadd, and Souria al-Sha’ab,” as well as major regional newspapers and international media including Reuters, the BBC, CNN, The Guardian, the Financial Times, the New York Times, and Britain's The Times.

Screengrab of document in which ARK boasts on the extent of its media reach in Syria.
© Photo : Screengrab from files obtained by Anonymous

For services rendered, ARK reportedly received payments of millions of pounds from British taxpayers, including a 2.3 million pound payment in 2018, according to one leaked ‘pricing model’ record. 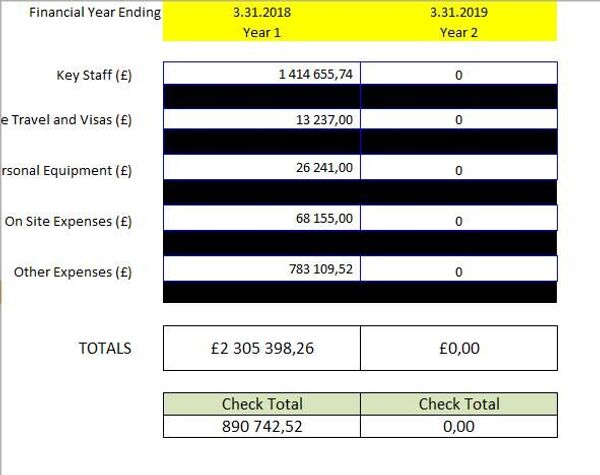 Several other contractors, including Albany, Adam Smith International, socio-economic and technical consultancy WYG, and the Global Strategy Network were said to have provided similar services promoting the Syrian opposition, spreading narratives, and/or providing organizational and security support of various kinds. 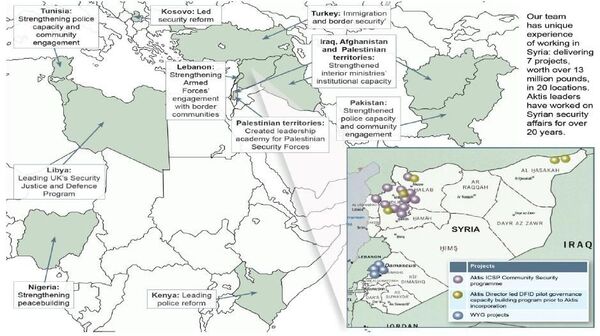 Map from WYG Consortium presentation on 'security and justice programmes in fragile states', including Syria.
© Photo : Screengrab from files obtained by Anonymous

The documents were released by Anonymous on September 8, but have been completely ignored by the mainstream media, with The Grayzone's Ben Norton becoming the first independent journalist to analyse their contents.

Officials in the US and the UK, as well as the multitude of media organizations mentioned above have not commented on the documents, their authenticity, or the media's alleged role in knowingly or unknowingly promoting the Western state-crafted narrative on the Syrian conflict.