Foreign Sanctions, Interference to Have Opposite Effect on Belarus, Foreign Minister Says 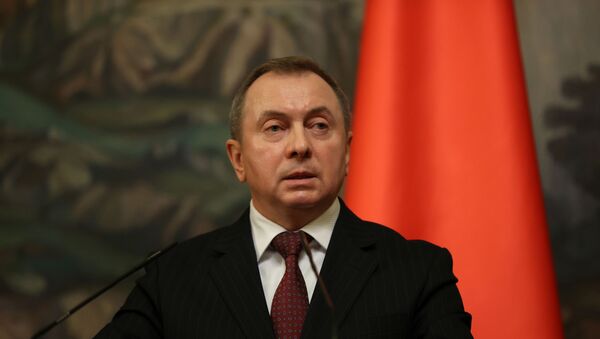 UNITED NATIONS (Sputnik) - Sanctions and foreign interference in the internal affairs of Belarus will have the opposite effect, Belarusian Foreign Minister Vladimir Makei said at the UN General Assembly, warning against attempts to bring chaos to Belarus.

"We note with regret the increasing attempts by a series of countries to abuse the UN platform including the Security Council, to further their own narrow political interests. This includes some western nations focusing their attention on the situation Belarus," Makei said.

Makei stressed that in August, the people of Belarus made their choice during the presidential elections.

"They chose a stable and prosperous state, they chose peace and good neighborly relations, they chose sustainable development. However, rather than respecting this choice, we are seeing attempts to destabilize the situation in our country. Following unsuccessful attempts to impose color revolutions on us, we are now experiencing external interference aiming to undermine the very construction of our state," the foreign minister said.

He called on the western partners of Belarus to demonstrate impartiality and restraint.

"Interference in our internal affairs, sanctions and other restrictions on Belarus will have the opposite effect and are harmful for absolutely everyone," the foreign minister said, adding that "the future [of Belarus] is not to be decided at the barricades but through civilized dialogue including through the process of constitutional reform which has already begun."

Mass protests have persisted in Belarus following the disputed August 9 presidential election, in which longtime President Alexander Lukashenko claimed a sixth term (the opposition did not recognize the results). Police cracked down on protesters during the first several days of the unrest. More than 6,700 people were detained during the initial phase of the protest.

On Thursday, UK Foreign Secretary Dominic Raab said that the UK government was preparing to impose sanctions against Belarus, based on alleged human rights violations committed by Lukashenko’s government.

Earlier in the week, the EU foreign Affairs Council failed to agree on a Belarus sanctions list. According to High Representative of the European Union Josep Borrel, the sanctions will be discussed by EU leaders at their next summit.