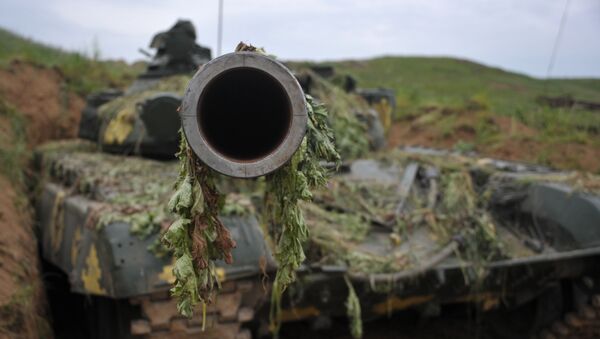 Ilya Tsukanov
All materialsWrite to the author
Clashes broke out in the contested Nagorno-Karabakh region early Sunday morning, with Azerbaijan and Armenia accusing each other of sparking the hostilities. The Nagorno-Karabakh conflict has been the main bone of contention in cool relations between Yerevan and Baku for over three decades.

Fighting in Nagorno-Karabakh continues to escalate, with Armenia and authorities in the self-proclaimed Republic of Artsakh which control the enclave declaring martial law and starting mobilizations of reserve servicemen. Baku, meanwhile, has announced martial law and declared curfews in parts of the country.

What Sparked the Fighting?

Armenian and Azerbaijani authorities have made conflicting claims about what began Sunday’s escalation.

According to the Azeri side, self-defence forces from Artsakh (the Armenian side’s name for Nagorno-Karabakh), spontaneously began massed artillery strikes on settlements and Azerbaijani military positions along the entire line of contact, causing both civilian and military casualties.

The Armenian side says it was Azerbaijan which sparked the fighting by launching massed missile, artillery and air strikes at targets inside Nagorno-Karabakh, prompting local self-defence forces to respond. 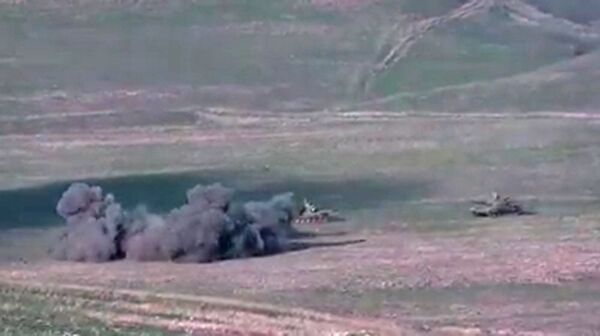 In this handout video grab released by the Armenian Defense Ministry, Armenian forces destroy Azerbaijani military vehicle at the contact line in Nagorno-Karabakh.
© Photo : Ministry of Defence of Armenia
/
Go to the photo bank

On September 25, two days before the fighting started, Armenia and Azerbaijan accused one another of building up forces along the border between the two states. A week earlier, on September 19, Azerbaijani President Ilham Aliyev said he “negatively” assessed the situation surrounding negotiations with Yerevan on the Nagorno-Karabakh issue, saying that “in practice, the negotiations process is not taking place.”

The Armenian and Azerbaijani militaries had already clashed directly for several weeks in July, with the fighting taking place several hundred kilometers from Nagorno-Karabakh, and leading to the deaths of 12 Azeri troops, including a major general, and six Armenian soldiers. The two sides blamed one another for that flare-up, and both claimed victory.

A local woman shows damage in her house after the shelling by Armenian forces in the Tovuz region of Azerbaijan, Tuesday, July 14, 2020
© AP Photo / Ramil Zeynalov

Just as they have made conflicting claims about who started the clashes, Armenian and Azerbaijani officials have presented contradictory statements about the fighting that has taken place.

Per the Armenian side, ten Artsakh servicemen and two civilians, including a small child, were killed in Azeri shelling, which was said to include attacks on civilian areas which injured over 10 people. Yerevan says Artsakh’s self-defence units have destroyed at least ten Azeri tanks and armoured vehicles, four helicopters and 15 drones. The Azeri side says it has destroyed 12 Armenian anti-aircraft systems, and that it lost one helicopter. Baku has referred to an unspecified number of “casualties and wounded” among the military, as well as 19 civilian casualties following alleged Armenian shelling which it says prompted it to launch its counteroffensive.

Both sides have released unauthenticated footage of enemy military hardware being destroyed, with the Armenian footage allegedly showing an attack on advancing Azerbaijani tanks, while the Azeri armed forces video allegedly shows Armenian entrenched positions being destroyed in air strikes.

An assistant to President Aliyev accused Armenia of spreading “disinformation” with the tank video, suggesting that it was “old” footage that doesn’t reflect the reality on the ground.

On Sunday afternoon, the Azeri military said it had taken control of six villages and a number of strategic heights in Nagorno-Karabakh. Artsakh’s self-defence forces dismissed these claims, calling them an “another informational provocation by the Azerbaijani propaganda machine.”

In an address to the nation Sunday afternoon, Armenian Prime Minister Pashinyan warned that “a large scale war in the South Caucasus, on the threshold of which we are standing, could have the most unpredictable consequences and expand beyond the region, acquiring a scale which threatens international security and stability.”

“The Armenian people are ready for war, as they have always realized that the Armenophobia, enmity and hatred inculcated in Azerbaijan could not lead to anything else…Armenia is a guarantor of the security and independence of Artsakh, and will use the potential of its people and state to protect the borders of the homeland,” Pashinyan said.

In his own remarks Sunday, Azerbaijani President Aliyev warned that Armenia’s “military provocation,” which has led to “losses among the Azerbaijani military and civilian population,” would not be left “unanswered.” 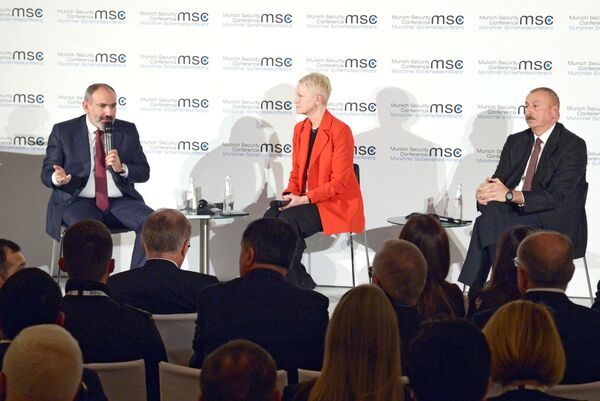 What Regional Powers are Saying

Russia has called for an “immediate” halt to hostilities between its Caucasian region partners. President Putin held telephone talks with Prime Minister Pashinyan, where he was said to have “expressed serious concern over the resumption of large-scale clashes” and the need to “make all necessary efforts to prevent a further escalation of the confrontation, and most importantly…to stop hostilities.”

The Russia-led Collective Security Treaty Organization military alliance, which includes Armenia, has similarly called for a peaceful resolution to the conflict via the established Organization on Security and Cooperation in Europe Minsk Group process. Russian Foreign Minister Sergei Lavrov is said to have held talks with his Armenian, Azerbaijani and Turkish counterparts.

The OSCE’s Minsk group “strongly condemned” the flare-up of fighting on the conflict line, and urged the immediate halt in hostilities and the resumption of negotiations.

European Council President Charles Michel and the European Union’s foreign policy Josep Borrell expressed “concern” over the escalation of hostilities, with Michel calling for the conflict to be stopped “as a matter of urgency, to prevent a further escalation.”

Reports of hostilities from the Nagorno-Karabakh conflict zone are of most serious concern.

Military action must stop, as a matter of urgency, to prevent a further escalation.

An immediate return to negotiations, without preconditions, is the only way forward.

A shaky ceasefire occasionally broken by fighting has been in place in Nagorno-Karabakh since 1994. The Armenian-Azerbaijani conflict for the 4,400 square km piece of land-locked territory in the southern Caucasus began in the late 1980s, when a wave of nationalism unleashed by perestroika led to an explosion of animosity between Armenians and Azeris which eventually led to ethnic cleansing, pogroms, and massacres of minority communities in both Soviet republics. Amid the tensions, Nagorno-Karabakh, an autonomous region within the Azerbaijani republic, attempted to secede from Baku. Azeri and Soviet authorities attempted to prevent this from happening, and in 1991, several weeks before the collapse of the Soviet Union, Azerbaijan’s parliament formally abolished the region’s autonomous status. The conflict erupted into a full-scale war in early 1992, and lasted until 1994, when Armenian forces established full de facto control of the enclave and several surrounding areas. Russia mediated a ceasefire to halt hostilities the same year, but a proper peace treaty was never signed. 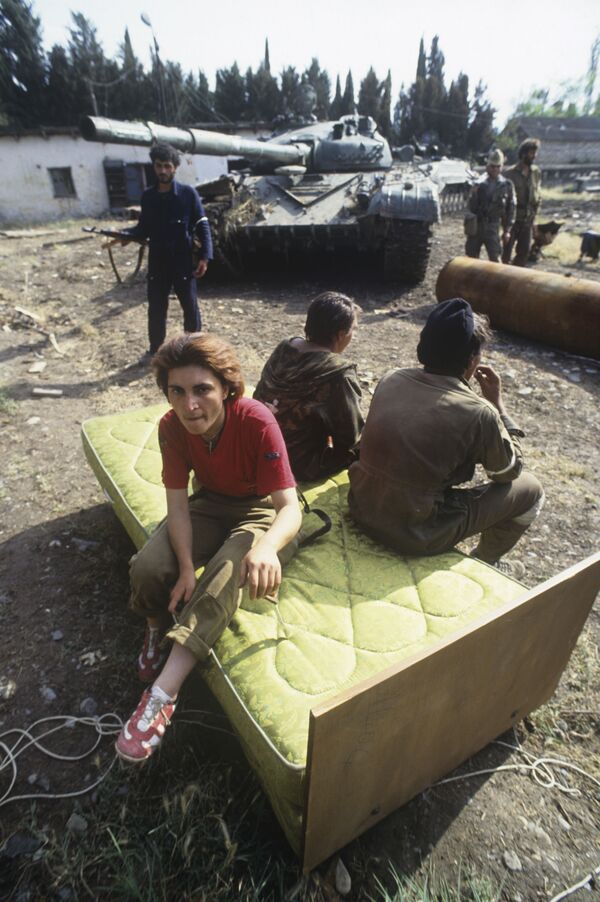 On Sunday, Pashinyan announced that Sunday's escalation may prompt Armenia to formally recognize the Republic of Artsakh. At the moment, the self-proclaimed breakaway republic has no formal diplomatic recognition from any United Nations member state, although it is unofficially heavily supported by Yerevan.