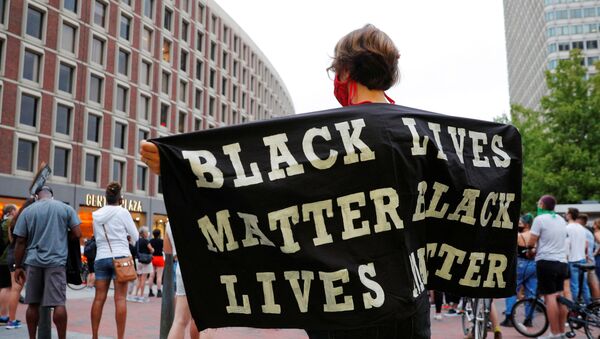 Two Trump supporters were injured on Saturday in Yorba Linda, California, after a BLM activist ploughed into a crowd. The driver, who organised the pro-BLM group Caravan4Justice, was arrested near the scene.

A Black Lives Matter (BLM) activist is facing attempted murder charges after allegedly driving her sedan through a crowd of Trump supporters in southern California on Saturday.

​The incident followed exchanges of violence between BLM demonstrators and Trump supporters, leading to police declaring an unlawful assembly and ordering the entire crowd's dispersal.

​Authorities said that the BLM protesters, who were staging an event called 'Caravan for Justice', were confronted by counter-protesters who crossed the six-lane Imperial Highway.

“Approximately 30 minutes after the protests began, we began to receive reports of physical altercations occurring between the two protest groups, including at least one individual who was pepper-sprayed by another protestor”, the Orange County Sheriff’s Department said while speaking to ABC News.

Law enforcement told the local ABC affiliate that one man and one woman had been injured due to the collision, with one suffering two broken legs.

Turner was arrested at the scene and taken to the county jail and is also facing a charge of assault with a deadly weapon. Another protester, Jason Mancuso, 46, was detained for failure to obey the dispersal order.

Up to 250 people attended the "Caravan for Justice" rally three days after a homeless black man was shot and killed by a white police deputy in San Clemente.

The "Caravan for Justice" protests began earlier this year in support of the Black Lives Matter movement and to highlight and remember those who had lost their lives at the hands of US police officers.

​The incident marks the second time a driver has plowed through a southern California protest in two days.

On Thursday night, a BLM protester was hit by a pickup truck while attending a march in Hollywood, also suffering non-life-threatening injuries.

🇺🇲 BLM/Pantyfa terrorists chase down a car and attempt to pull the driver out of their vehicle after driving through a so called “peaceful” protest in Hollywood. 🇺🇲 pic.twitter.com/QzfDoKqdWc

​A preliminary police investigation discovered that protesters began attacking the vehicle with sticks as the driver attempted to go through the crowd.

As the driver attempted to flee the situation, he was struck by a protester.

In 2017, a Trump supporter named James Alex Fields Jr drove his vehicle into a crowd of anti-fascist counterprotesters at the 'Unite the Right' rally in Charlottesville, Virginia, leading to the death of 32-year-old Heather Heyer.

He was later sentenced to life imprisonment after being convicted of of hit and run in a state court, as well as first-degree murder and eight counts of malicious wounding.