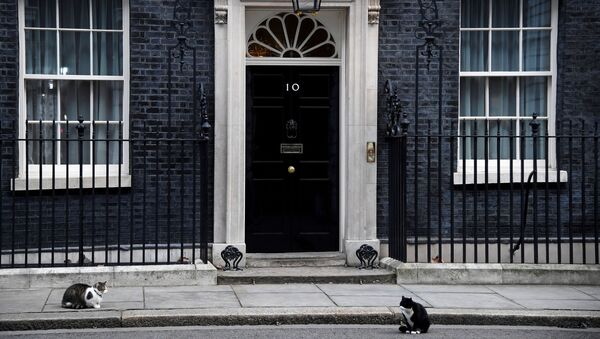 Jason Dunn
All materialsWrite to the author
As part of growing ideological polarisation in the West, some governments have begun to try to quell rising anti-capitalist feeling and consider movements who oppose the current economic orthodoxy as extremist.

The British government has ordered schools in England not to use teaching material that includes opposition to capitalism, as the UK joins in the anti-communist trajectory sweeping Western countries.

New Department for Education (DfE) guidance issued on school leaders and teachers on Thursday has deemed anti-capitalism to be an “extreme political stance”, comparable to opposition to freedom of speech, antisemitism, and supporting illegal activity.

“Schools should not under any circumstances use resources produced by organisations that take extreme political stances on matters. This is the case even if the material itself is not extreme, as the use of it could imply endorsement or support of the organisation", the guidance said, for inclusion in the statutory curriculum.

The examples of "extreme political stances" include "a publicly stated desire to abolish or overthrow democracy, capitalism, or to end free and fair elections”, opposition to freedom of speech, using racist, including antisemitic language, "the endorsement of illegal activity; and a failure to condemn illegal activities done in support of their cause".

​Minister for school standards Nick Gibb said that the new relationships, sex and health education (RHSE) guidance and training resources equips "all schools to provide comprehensive teaching in these areas in an age-appropriate way".

He said that the materials give "schools the confidence to construct a curriculum that reflects a diversity of views and backgrounds".

Former shadow chancellor John McDonnell, however, described the measures as an effective outlawing of reference in schools to certain important events in British history, and represented a growing “authoritarianism" within the ruling Conservative party.

"On this basis it will be illegal to refer to large tracts of British history and politics including the history of British socialism, the Labour Party and trade unionism, all of which have at different times advocated the abolition of capitalism", McDonnell said.

“This is another step in the culture war and this drift towards extreme Conservative authoritarianism is gaining pace and should worry anyone who believes that democracy requires freedom of speech and an educated populace".

Economist and former Greek finance minister Yanis Varoufakis said the new guidelines show “how easy it is to lose a country, to slip surreptitiously into totalitarianism”.

“Imagine an educational system that banned schools from enlisting into their curricula teaching resources dedicated to the writings of British writers like William Morris, Iris Murdoch, Thomas Paine even. Well, you don’t have to. Boris Johnson’s government has just instructed schools to do exactly that".

Barrister Jessica Simor QC said that the government has itself not complied with the rules, after admitting that it intends to break international law by changing the terms of the Brexit Withdrawal Agreement and continues to illegally sell arms to Saudi Arabia for use in the Yemen conflict.

Do the fourth and fifth bullet points mean that schools should not accept Government money? https://t.co/5hllx55iZN

The new guidelines banning anti-capitalist material comes amid a wave of growing anti-communist sentiment in Western countries, following a direction of travel set by the United States.

In Washington, the governing Trump Administration has dusted off the old rhetoric of Joe McCarthy and escalated its ideological offensive against anti-capitalist countries and movements. In 2017, the White House declared 7 November as a 'National Day for the Victims of Communism', marking the exact centenary of the Russian Revolution which led the establishment of the USSR - the world's first formally socialist country.

The following year, the US Council of Economic Advisors published a 72-page document entitled 'The Opportunity Costs of Socialism' to coincide with the 200th birthday of anti-capitalist thinker Karl Marx. Citing the allegedly historical "failures" of communist countries, the publication intends to push back against growing anti-capitalist sentiment in the United States - materialising in the popularity of self-described Democratic Socialist Bernie Sanders - and other left-wing movements across the world.

Part of a New Cold War?

While McCarthyism in the 1950s also served as a way to root out dissent within US society and accuse anyone from anti-war protestors to liberal celebrities of spying for the then-USSR, the resurrection of 'Red Scare' tactics today comes amid concerns within the US government that their position as the worlds number 1 economy will be usurped by the People's Republic of China.

The US has made repeated attempts to recruit its traditional allies in its trade dispute with Beijing. As part of its regime of sanctions, banning investments, and accusing China of being responsible for the coronavirus pandemic, Washington has put increased pressure on Britain to fall in line and ban firms allegedly linked to the Chinese government. 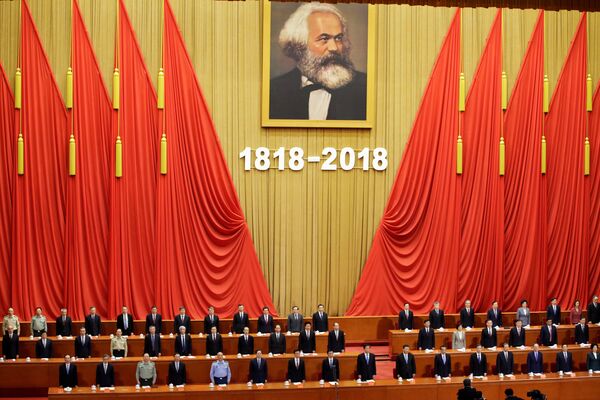 Chinese President Xi Jinping and other officials sing the national anthem at an event commemorating the 200th birth anniversary of Karl Marx, in Beijing, China May 4, 2018
© AP Photo / Jason Lee

President Trump threatened in 2019 not to sign a post-Brexit trade deal with the UK if then Prime Minister Theresa May permitted Chinese tech giant Huawei into the UK's 5G network. Under the leadership of Boris Johnson, London complied with the US' demand this year.

In May 2020, Washington included in trade talks an exclusive right to void the agreement should Britain enter into a separate trading pact with what the US considers a 'non-market economy' - a direct attempt to bring London further into the fold against Beijing.

Just two months later, US Secretary of State Mike Pompeo heavily emphasised in an official address that the Communist Party of China is guided by Marxist-Leninist ideology as a justification for continued pressure against the country.

"We have to keep in mind that the CCP regime is a Marxist-Leninist regime. General Secretary Xi Jinping is a true believer in a bankrupt totalitarian ideology", he said.

"It’s this ideology, it’s this ideology that informs his decades-long desire for global hegemony of Chinese communism. America can no longer ignore the fundamental political and ideological differences between our countries, just as the CCP has never ignored them".

By dusting off the old rhetoric to fuel the trade war being pushed by Washington, now supported by London, the transatlantic allies reveal their struggle for hegemony is as much ideological as it is economic.