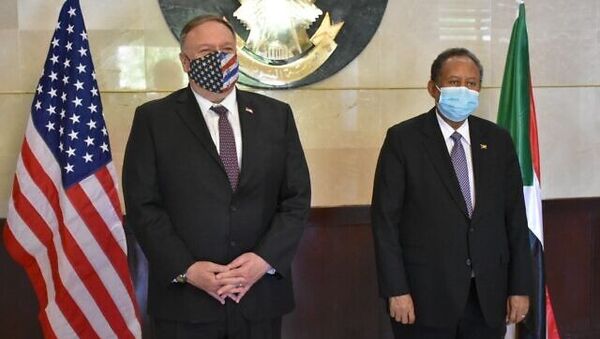 © Photo : Twitter
Subscribe
Ilya Tsukanov
All materialsWrite to the author
The United States placed Sudan on its ‘State Sponsors of Terrorism’ list in 1993, after al-Qaeda leader Osama bin Laden moved to the country. The list also includes Iran, Syria and North Korea, with Cuba removed in 2015 during a brief period of warming ties with Washington close to the end of President Barack Obama’s second term.

The United States is reportedly pressuring Sudan to normalize relations with Israel as a condition for the African nation’s removal from Washington’s State Sponsors of Terrorism listing despite Khartoum’s meeting of all criteria to be taken off the list, Reuters has reported, citing six sources said to be familiar with the matter.

“Sudan has completed all the necessary condition. We expect to be removed from the list soon,” an anonymous Sudanese government official told the news agency.

However, two sources from the US and one from the Gulf said that Washington has asked Gen. Abdel Fattah al-Burhan, chairman of Sudan’s Sovereignty Council, to ‘copy the example’ set by the United Arab Emirates and Bahrain earlier this month in establishing ties with Tel Aviv, linking removal from the terror list to the issue and offering the added benefit of development and humanitarian aid for Khartoum.

Reuters’ three Sudanese government sources told the news agency that removal from the terror list and relations with Israel were separate, unrelated issues.

“Sudan made clear to the American side that there is no relationship between removing Sudan from the terror list and exploring relations with Israel,” one source said, reiterating sentiments expressed by Prime Minister Abdalla Hamdok during his meeting with US Secretary of State Mike Pompeo last month.

The US and Sudan have been negotiating the lifting of Washington’s state sponsor of terrorism designation for over a year, with talks starting soon after the Sudanese military overthrew the government of Omar al-Bashir in April 2019 in a coup d’état after months of street protests. A mixed civilian-military leadership known as the ‘Sovereignty Council’ was set up in August 2019, with Hamdok and a mostly civilian cabinet chosen to govern, and the country expecting to complete its transition to a democracy by the year 2022, when elections are set to be held.

Zarif Trolls Pompeo for Revealing ‘Real’ Criteria for Removal From State Department’s Terror Listing
In the meantime, Khartoum has resisted establishing formal ties with Israel, saying it does not have a mandate to do so from the public.

The US has held back lifting the terror designation against Sudan despite the country’s cooperation with Washington on terrorism, Khartoum’s multi-million dollar settlement with the families of the victims of the 2000 attack on the USS Cole by Osama bin Laden, and its plans to pay out an additional $335 million to the families of victims of al-Qaeda attacks on US embassies in Kenya and Tanzania in 1998. 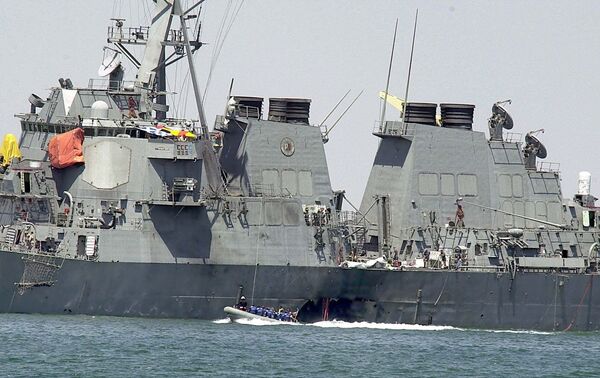 In Sunday, Oct. 15, 2000 file photo, experts in a speed boat examine the damaged hull of the USS Cole at the Yemeni port of Aden after a powerful explosion ripped a hole in the U.S Navy destroyer in the Yemeni port, killing 17 sailors and injuring some 30 others. A federal appeals court on Thursday, June 20, 2013 reinstated a lawsuit by the families of 17 sailors killed in the 2000 bombing of the USS Cole. A three-judge panel of the 4th U.S. Circuit Court of Appeals on Thursday reversed a lower court's dismissal of the lawsuit against Sudan.
© AP Photo / DIMITRI MESSINIS

The country has sought removal from the terror list in connection with its desire for negotiate debt relief with foreign creditors amid a snowballing economic and currency crisis. Khartoum activated a state of economic emergency earlier this month amid the Sudanese pound’s plummeting value against the US dollar. The country’s economy has been in a state of permanent crisis since 2011 and the secession of South Sudan from Khartoum’s jurisdiction, which led to the loss of 75 percent of the nation’s oil revenues.

General al-Burhan met with Israeli Prime Minister Benjamin Netanyahu in February, where they agreed to establish a “relationship of goodwill.” The move was criticized by other members of the Sovereignty Council and led to street protests in Khartoum and elsewhere. This week, Israeli media reported that Burhan and Netanyahu may meet again ‘in the coming days’ for more talks.

Al-Burhan traveled to the UAE earlier this week for talks with US officials, with the normalization of ties with Israel one of the issues discussed.

US President Donald Trump has made the normalization deal between Israel and the UAE and Bahrain, which was brokered by Washington, a major plank of his reelection campaign, and has hinted that other Arab states may join Abu Dhabi and Manama in setting up relations with Tel Aviv in the near future.

US, UAE Mull Clinching F-35 Deal by 2 December Amid Reports of Netanyahu’s Nod to Sale, Media Says
The US has reportedly awarded the UAE for its decision, with the kingdom submitting a formal request for the purchase of Lockheed Martin F-35 fighters this week, and Trump saying earlier this month that he would have “no problem” selling the advanced aircraft to Abu Dhabi.

The UAE and Bahrain became the third and fourth Arab states, and the first and second Arab states in the Persian Gulf region, to establish relations with Israel earlier this month. 18 of the Arab League’s 22 members, including Sudan, continue to have no formal ties with the country.