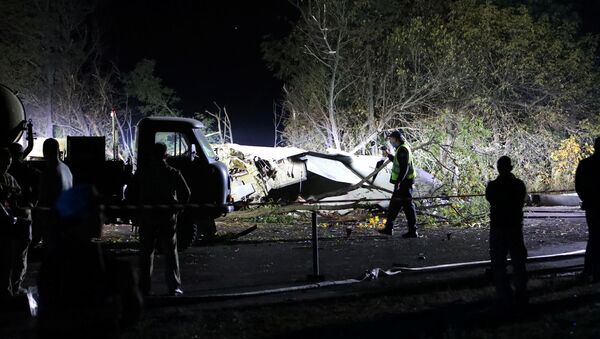 MINSK (Sputnik) - Investigators in Ukraine have found the body of another individual who died as a result of an An-26 military plane crash in Kharkiv region, the press department of the State Emergency Service said on Saturday, adding that the search for two more bodies continues.

"Kharkiv region: The body of a deceased individual was found under the fuselage at the site of the plane crash at 09:00 [06:00 GMT] on September 26. The search for two more people continues," the State Emergency Service said in a message on Telegram.

The regional governor of Kharkiv, Oleksiy Kucher, said on Friday evening that the cause of the accident, according to preliminary reports, was an engine failure prior to the crash.

On Friday evening, a Ukrainian military An-26 transport aircraft crashed near the town of Chuguev in the Kharkiv Region. According to the Ukrainian authorities, 27 people were on board the plane, comprising 20 cadets and seven crew members. Two cadets survived the initial crash and are currently receiving intensive care treatment in hospital.