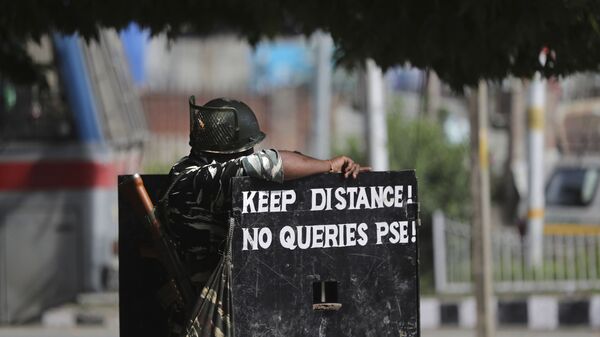 Nair N.B.
Sputnik correspondent
All materialsWrite to the author
Indian-administered Kashmir has witnessed fewer terrorism-related incidents since the federal government overturned Article 370 of the Constitution, which granted special status to Jammu and Kashmir, the country's federal Home Ministry told Parliament during the recently-concluded monsoon season session.

In a joint operation, Indian security forces gunned down two terrorists belonging to Lashkar-e-Taiba (LeT) in the Anantnag district of South Kashmir. LeT is headed by UN-designated global terrorist Hafiz Saeed, and operates mainly from Pakistan.

​Indian Army said, one AK and one INSAS rifles were recovered from the militants.

Police officials also confirmed to media that four young people were injured when an explosive device went off at the site of the encounter in Anantnag. Two of the injured have been shifted to Sringar hospital.

In a separate incident, terrorists had opened fire at security personnel in Shopian in Kashmir. However, after missing their targets, the terrorists fled from the spot.​

On Thursday, a young lawyer was shot dead outside his residence in Srinagar, capital of Jammu and Kashmir. The lawyer, Babar Qadri, had expressed that he feared for his life a few days ago. He had made a name for himself taking up human rights and juvenile justice cases, and was critical of both militants and mainstream political parties.

Kashmir witnessed fewer incidents of militancy-related violence after New Delhi stripped the erstwhile state of its quasi-autonomous status. According to data provide by the federal Home Ministry in Parliament, there were 443 incidents of violence during the 12 months prior to August 2019.

However, there have only been 206 violent incidents since 5 August 2019, according to data provided by the ministry.