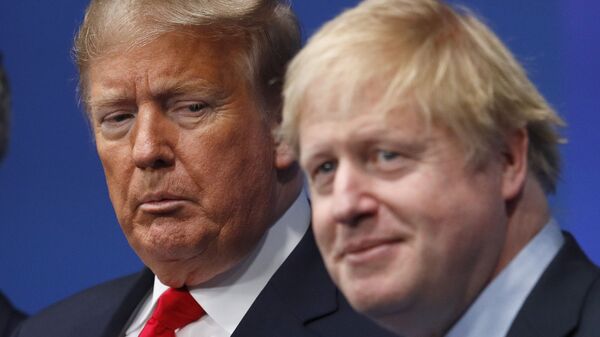 Demond Cureton
All materialsWrite to the author
The partnership between London and Washington will allegedly boost collaboration on the development and research of AI as well as "explainability and fairness", a US official told Axios.

The Trump administration is set to announce it has signed a strategic partnership on artificial intelligence (AI) with the United Kingdom, Axios reported on Friday.

"America and our allies must lead the world in shaping the development of cutting edge AI technologies and protecting against authoritarianism and repression. We are proud to join our special partner and ally, the United Kingdom, to advance AI innovation for the well-being of our citizens, in line with shared democratic values,” Michael Kratsios, US chief technology officer said in a statement.

The news comes the US joined the Global Partnership on AI (GPAI), citing fears that China could surpass the US in the tech race as well as a need to provide recommendations on AI technologies that would allegedly respect civil liberties.

Rise of 'Next Geopolitics' to Explore How Tech, AI Will 'Reconfigure' World Order, Futurist Says
According to a Bloomberg interview with Kratsios, the GPAI would be an 'important' check on Chinese approaches to AI.

The news comes as Beijing launched a $1.4tn pledge in May to boost key mainland technologies, including infrastructure, 5G, artificial intelligence, semiconductors and others as part of the nations Made In China 2025 plan and included in Beijing's 5-year-plan set to be revealed next month.

US president Donald Trump launched his trade war against Beijing in March 2018, sending relations with China to historic lows and targeting numerous mainland tech firms such as Huawei, ZTE, ByteDance, Tencent and others.

The measure have prompted Chinese officials and firms to boost investment in mainland firms in a bid to reduce dependence on US technologies, namely processors and operating systems, amid the ongoing trade war.