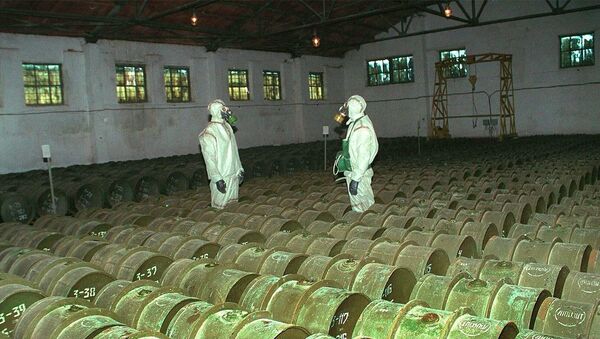 Ilya Tsukanov
All materialsWrite to the author
The so-called ‘Novichok’ group of nerve agents, developed by the USSR during the Cold War, has made it into the news recently, with German authorities alleging that the weapons-grade poison was used to attack Russian opposition figure Alexei Navalny. In an extensive interview with Sputnik, the weapon’s creator revealed why such claims are absurd.

The Novichok (‘Novice’ or ‘Newbie’) group of chemical weapons was created in response to US researchers’ work on binary chemical weapons agents, and its effectiveness is comparable to that of a nuclear bomb, Dr. Leonid Rink, the State Research Institute of Organic Chemistry & Technology researcher played a major role in the creation of the deadly weapon, has revealed.

“Work began in the 1970s. Before that, in the USSR it was thought that it was not worth making binary weapons in which each of its components by itself is not dangerous. Indeed, we had sufficient arsenals for the storage of dangerous mono-substances spread over large areas of the country. But in the late 1970s, the United States adopted the first binary system. Then the Politburo made the decision to start work in this area. The choice fell on me,” Rink told Sputnik. 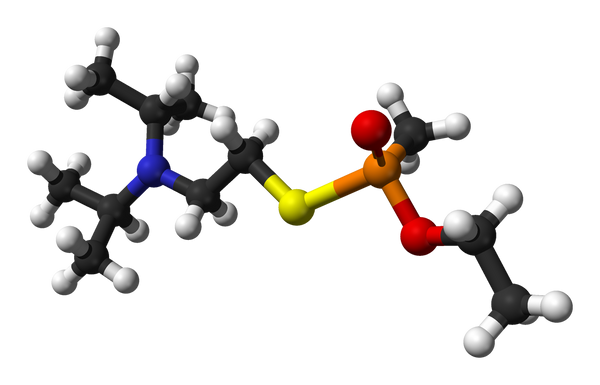 According to the chemist, the initial development team was small, with only seven people total having access to all information about the ‘Novichok system’, and involved in testing at a chemical weapons testing facility in the town of Shikhany, about 850 km southeast of Moscow.

The weapon’s creators were provided with a series of requirements, including the condition that the binary poison not be flammable, explosive, or subject to freezing, and that the weapons-grade poison’s deadly effects would dissipate shortly after use.

Individually, the poison’s compounds were of such low toxicity that, in Rink’s words, one would “need to eat [them] by the spoonful in order to achieve some kind of effect.”

Deadliness Comparable to a Nuclear Bomb

At the same time, Rink said that when combined, the compound poison’s deadliness is comparable to that of a nuclear bomb.

“Novichok was much cheaper than a nuclear bomb, and in the event of its use, all of the enemy’s facilities and equipment would remain intact. All the buildings, all the equipment.  All that would be needed would to be wash them down, and then they could be used for one’s own purposes,” the scientist explained, saying the weapons system was meant for use on the battlefield by the Soviet Army and to decompose after a short time.

The Novichok system was a weapon of mass destruction, not the means to eliminate a single individual, Rink said. “To kill one person, there are means which are orders of magnitude more effective, which have a delayed toxicity for any planned period you wish: a week, longer, shorter. They can be used in such quantities that no one will ever find any traces of them,” he stressed.

According to the researcher, Western governments found out about the existence of the Novichok programme after Vil Mirzayanov, a chromatographer tasked with preventing foreign intelligence services from identifying the molecules of poisonous chemicals, published articles and a book on the deadly agents in the early 1990s and fled to the United States. Characterizing Mirzayanov as a “terrorist” or “accomplice of terrorists,” Rink said he will one day be tried for his crime of providing would-be terrorists with the information on how to create ‘Novichok’ in a lab.

If Poisoned by Novichok, Navalny Would Be Dead Before Making It to His Plane

Asked to comment on the recent allegations by the German government that Russian opposition figure Alexei Navalny was poisoned by Novichok, Rink dismissed the claims as ridiculous, and explained why.

Firstly, he said, if Navalny had truly been poisoned by Novichok, he would have been dead in 10 minutes flat. “From the very first symptoms it would be minutes. Death would follow in 10 minutes.”

Secondly, Rink noted, the possibility of actually detecting Novichok in Navalny’s system would be close to zero, given that the binary weapon is specifically designed to degrade immediately after use.

“I think that Novichok itself would stop being detectable very quickly. But those metabolic products could remain in the body for some time. I doubt that anything could last two weeks though. I doubt that very much. Moreover, don’t forget that very little of the substance would actually be needed – such a small amount that its traces would be impossible to detect,” the scientist said.

Rink clarified that roughly speaking, a thousandth of a milligram of the binary poison multiplied by a person’s weight in kilograms would be enough for deadly effect.

Alexei Navalny Discharged From Charite Hospital
Earlier, after Navalny’s Instagram account released a statement saying that Novichok had been found on drinking water bottles from the hotel where Navalny had been staying prior to his hospitalization, Rink said that if the substance on the bottles was really the Soviet-made chemical agent, not just the opposition figure, but everyone who touched the bottles would have been killed.

Rink also outlined the gruesome details of how the binary poison works and its symptoms, including pupillary constriction and intense muscle spasms.

“These are substances which, due to the interruption of the nerve impulse, cause muscle convulsions, particularly of the eye muscles. In other words, eye muscles show a constriction of the pupil; it becomes practically invisible even with such small doses of Novichok that there is practically no poisoning. This symptom appears immediately,” he said.

In this connection, Rink said, an analysis of photographs of Navalny before he got onto the plane, on the plane itself, in hospital and on the way to the second plane which took him to Germany shows that he could not have been poisoned by Novichok.

“If Navalny was poisoned by Novichok, he would not have made it to any plane, if he drank something at the hotel, because his eyes would close and he would be unable to make it to a plane or anywhere else. I guarantee this 100 percent,” the chemical weapons expert said.

Developed between the early 1970s and the early 1990s, the so-called Novichok group of military-grade nerve agents was found out about by Western countries following the publication of Mirzayanov’s work, and learned about in more detail after US chemical weapons experts began working at labs across the former Soviet Union in the 1990s. According to the New York Times, the US Army Corps of Engineers came in contact with Novichok during their work to decontaminate the Nukus Chemical Research Institute in Uzbekistan in 1999. 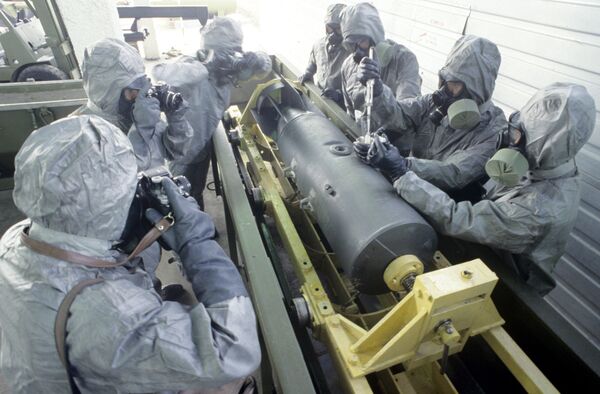 Soviet and foreign journalists watch the dismantling of chemical munitions.
© Sputnik / A. Solomonov
/
Go to the photo bank

Russia destroyed the last of its stocks of Soviet-era chemical weapons in 2017 under the supervision of the Organization for the Prohibition of Chemical Weapons, in accordance with its obligations under the Chemical Weapons Convention, which Moscow ratified in 1997. By comparison, despite its adoption of the CWC, the US has yet to destroy its own stocks of chemical weapons, with Washington currently projecting the complete elimination of the weapons class by 2023 after pushing back the deadline repeatedly.