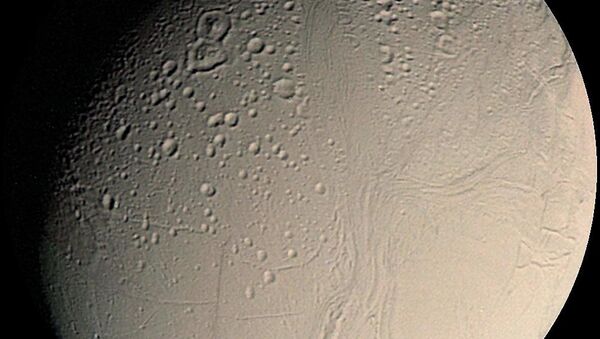 Andrei Dergalin
All materialsWrite to the author
The new discovery was made possible thanks to the data supplied by NASA's Cassini spacecraft which observed Saturn for over 13 years before exhausting its fuel supply and plunging into the planet's atmosphere.

An intriguing discovery has been made by scientists at one of Saturn's moons, Enceladus, as data supplied by NASA's Cassini spacecraft points at “strong evidence that the northern hemisphere of the moon has been resurfaced with ice from its interior", according to a statement by the US space agency.

The data collected via Cassini's Visible and Infrared Mapping Spectrometer, along with images captured by the spacecraft's Imaging Science Subsystem, has allowed researchers to make the “new global spectral map of Enceladus”,

And while the new map apparently displays a correlation between infrared signals and geological activity spotted on Enceladus back in 2005 – namely, "enormous plumes of ice grains and vapor" being shot from an ocean concealed beneath icy crust – and which "is easily seen at the south pole", similar infrared features have also been observed at the moon's northern hemisphere as well.

Other than revealing that the northern reaches of the moon are covered with fresh ice, this development also suggests that this kind of geological activity, a “resurfacing of the landscape”, has taken place in both of Enceladus' hemispheres, the statement notes.

"The infrared shows us that the surface of the south pole is young, which is not a surprise because we knew about the jets that blast icy material there," said Gabriel Tobie, VIMS scientist with the University of Nantes in France and co-author of the new research published in the scientific journal Icarus. "Now, thanks to these infrared eyes, you can go back in time and say that one large region in the northern hemisphere appears also young and was probably active not that long ago, in geologic timelines."

While the exact reason for this “resurfacing” in the moon's north appears to be unclear, likely culprits mentioned in the statement include “icy jets” and “a more gradual movement of ice through fractures in the crust, from the subsurface ocean to the surface".