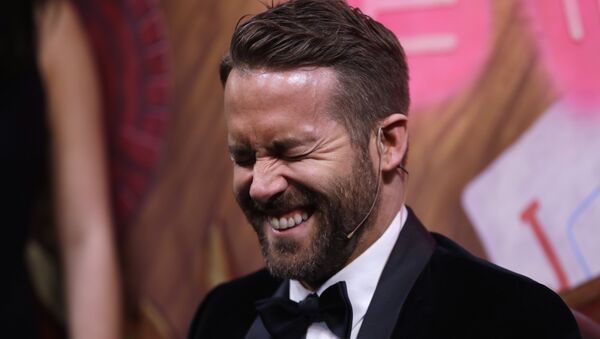 © AP Photo / Charles Krupa
Subscribe
Chris Summers
All materialsWrite to the author
Wrexham Football Club, who compete in the fifth tier and play at stadium with a capacity of only 10,000, have never played in the top-flight of English football. They have been struggling since 2008 but now they have new investment from an unlikely source.

On Wednesday night Reynolds shocked Twitter when he replied to a tweet: "You never know when Ryan Reynolds is going to turn up in Wrexham ;)", which had been written eight years ago.

​The original tweeter, Lois Morus, had been replying to a thread by her friend Shannon May about her life drawing class.

The pair had been discussing whether the naked man she had been drawing had been “fit”.

​​After the real Ryan Reynolds popped up on her Twitter feed, May replied late on Wednesday night: "Well, after being inactive on Twitter for about two years, a friend just showed me this. I had to reactivate my account. This s*** crazy."

Looking forward to seeing you around my hometown for #awkwardnakedtuesdays - let me know when you’re around for a cuppa! pic.twitter.com/HFDR0fWWKB

Ms Morus, 27, told Sputnik of her reaction when she heard the star had responded to her tweet: "It was just a bit bizarre really. I didn't look at my phone for a while and then saw all these messages! I thought it was a scam or something at first because I hadn't heard about the football club being involved​."

Asked about the prospect of Reynolds actually arriving in north Wales, Ms Morus who works for a Welsh language initiative Menter Dinefwr, said: "Oh gosh, he'd definitely have to come for a night out in Wrexham for sure! And just see the lovely town and surrounding areas."

It has emerged that Deadpool star Reynolds and McElhenney - the creator of sitcom It's Always Sunny in Philadelphia, are in talks with the club, which is owned by its own fans.

​Wrexham’s Supporters Trust Board said 97.5 percent of its 1,223 members were in favour of continuing talks with the pair about them investing in the club.

The statement said: "In due course, Mr McElhenney and Mr Reynolds will put forward their vision for Wrexham AFC and proposal for members to vote on at a second Special General Meeting.”

​​Wrexham, who compete in the National League and play at the 10,000 capacity Racecourse Ground, have never played in the top-flight of English football.

Wrexham fans have reacted with a mixture of joy and bemusement to the news of the planned investment from two wealthy and handsome thespians.