Qatar Eyes Normalisation With Israel in Exchange for Lifting of Gulf Boycott Against It, Source Says 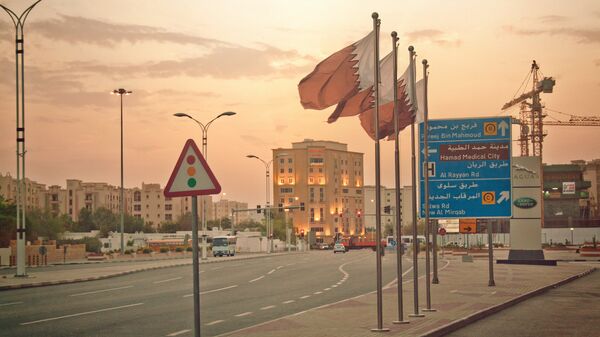 Elizabeth Blade
All materials
Qatar is poised to seal a deal with Israel as early as next month, says a source involved in the talks, adding that when it happens, it will present a drastic change from the current position of Doha that right now negates the possibility of recognising the Jewish state without reaching a solution on the Palestinian front.

In a confidential talk with Sputnik, an anonymous source in the Gulf that's connected to the highest echelons of government  in several countries, said Doha is now mulling over the option of normalising ties with Israel with the mediation of the US.

The revelation comes amid a barrage of criticism that has been directed at the United Arab Emirates for reaching an agreement with Israel; one of the loudest voices was that of Qatar.

"The State of Qatar affirmed its firm position on the Palestinian issue, which stipulates ending the Israeli occupation and establishing the State of Palestine with Jerusalem as its capital," said the country's foreign minister in a statement to Qatar News Agency, suggesting that a pact with the Jewish state was out of the question.

Apart from being vocal about the deal and its stance on the "Palestinian cause", Qatari media has also launched a massive media campaign aimed at de-legitimising the UAE and harming its stance on the international arena.

Speaking about the possible deal between Qatar and Israel, the source explained it might shape as early as next month, becoming a third Gulf state to ink an official deal with the Jewish state.

"The trade-off is simple. In exchange for a pact with Israel, Washington would exert pressure on the Gulf states, driving them to remove their boycott of Qatar," the official confided.

In 2017, the UAE, Saudi Arabia, Bahrain and Egypt severed their relations with Qatar, suspended trade and closed their air space with the Gulf country, accusing it of supporting the Muslim Brotherhood movement, deemed a terror organisation in many states of the region.

That boycott has been tough on Doha. In 2017, for example, immediately after the announcement of the boycott was made, Qatar was forced to lay off many foreign workers and reduce the salaries of others, promoting many to leave the Gulf state.

Two years later, it was reported that Qatari airlines lost some $639 million as a result of the sanctions, whereas the international standing of Doha has been dealt a severe blow.

To regain its position, Qatar intensified its involvement in mediation efforts between Israel and Hamas, an organisation that runs the Gaza Strip and has been deemed a terrorist organisation by the Jewish state.

Although Israel has always been wary of Doha's involvement, the millions of dollars it kept pouring into the Islamic group's coffers was able to keep the border with the enclave quiet.

Only recently, it has been reported that it was Doha that managed to bang out an agreement from Hamas to end the launch of its incendiary balloons into Israeli territory in exchange for a monthly flow of Qatari millions.

But the source in the Gulf says Qatar now wants to assume a bigger role in those mediation efforts, something that could only be possible if it established official ties with the Jewish state.

Shortly after the UAE and Bahrain signed their agreements with Israel, US President Donald Trump said that five other countries were set to follow suit in the coming months.