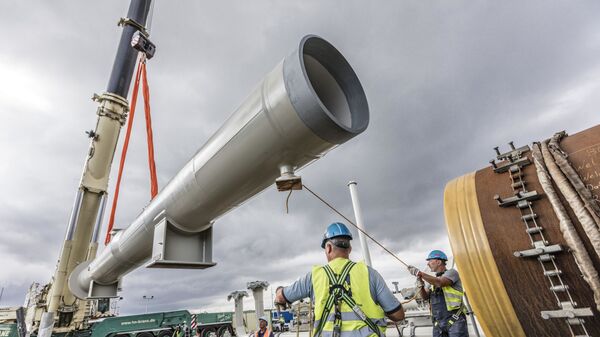 © Photo : Nord Stream 2 / Paul Langrock
Subscribe
International
India
Africa
MOSCOW (Sputnik) - Russian Foreign Minister Sergey Lavrov offered on Thursday to "calm down" and stop speculating on Nord Stream 2 prospects, saying that it should now be a matter of principle for Germany to complete the project.

When asked about risks for Nord Stream 2 in light of the alleged poisoning of Russian opposition figure Alexey Navalny, Lavrov replied: "I think it is time for us to calm down on this issue."

"We see the United States daily publicly try to humiliate the European Union, especially Germany, and demand through its officials that Germany realise its happiness and the need to strengthen its energy security, which according to the US means abandoning Nord Stream 2 and switching to much more expensive American liquefied natural gas. I believe – this is my personal opinion, I am not speaking officially now – I believe this issue is now a point of honour for the Federal Republic of Germany," he said at a press conference with his Iranian counterpart, Mohammad Javad Zarif.

US State Secretary Mike Pompeo told Germany’s Bild on Monday that his country is building a coalition to prevent the Russian-led project from being completed. The official also expressed a desire to see Germany adopt the US position on Nord Stream 2 either because of Navalny or the "real security implications" of dependence on Russian gas.

Chancellor Angela Merkel earlier spoke against making the pipeline's fate contingent on the situation around Navalny, who had been treated in Berlin’s Charite hospital since August 22 after the alleged exposure to a nerve agent from the Novichok group.

Navalny was released from hospital on Tuesday after his condition had "improved sufficiently."