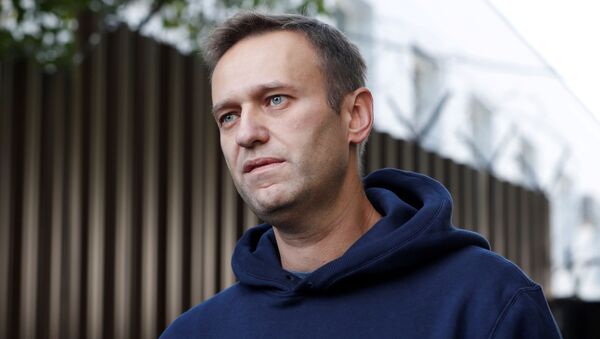 © REUTERS / Evgenia Novozhenina
Subscribe
International
India
Africa
BERLIN (Sputnik) - The health condition of Russian opposition figure Alexey Navalny is "very weak" and there are no plans to make any media statements on this topic, the Berlin-based Cinema for Peace foundation, which organized the activist's airlift to Berlin, told Sputnik on Thursday.

"Mr. Navalny is very weak. Neither Cinema for Peace nor [its founder] Jaka Bizilj speak about him. Our task of providing rescue transfer to Berlin has been completed and we currently do not have a scheduled press conference in our plans," a spokesperson for the foundation said.

Navalny fell ill during a domestic flight in Russia on 20 August. He was initially treated in the Siberian city of Omsk, where the plane had to urgently land. Two days later, once the doctors established he was fit for cross-border aerial transport, the 44-year-old was flown to the Berlin-based Charite clinic for further treatment.

The German government said doctors claimed they had proof Navalny was poisoned with a nerve agent from the Novichok group of toxins. According to Berlin, the conclusions of its doctors were confirmed by laboratories in France and Sweden.

Conversely, tests conducted by doctors in Russia did not show traces of poison in Navalny's system, prompting Moscow to demand that Germany provide evidence to back up its claims. However, none has been received as of yet.

The Berlin-based hospital said on Tuesday that Navalny was discharged from inpatient care after his condition had "improved sufficiently."