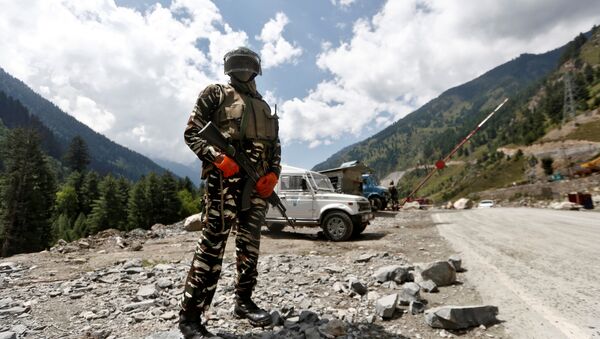 Nair N.B.
Sputnik correspondent
All materialsWrite to the author
India and Pakistan have clashed over Jammu and Kashmir since both countries gained freedom from British Colonial rule in 1947. Relations between the nuclear-powered neighbours further strained after New Delhi withdrew special status enjoyed by the erstwhile state of Jammu and Kashmir in August 2019.

India on Thursday slammed Pakistan for misusing “another forum by continuing its spurious narrative” on Jammu and Kashmir.

At a virtual meeting of Foreign Ministers of the Conference on Interaction and Confidence-Building Measures (CICA) in Asia, Pakistan raised the issue of Jammu and Kashmir.

India accused Pakistan of being the global epicentre of terrorism and for continuing to be the source of terrorist activities in its territories.

“We advise Pakistan to cease its sponsorship and overt and covert support to terrorism against India. This will enable the two countries to engage and address issues bilaterally rather than distract this important forum from its agenda,” said India's External Affairs Ministry in a statement.

India has been a member of CICA since it was founded in 1999. Today’s meeting also witnessed the transfer of the chairmanship of the regional bloc from Tajikistan to Kazakhstan.

In yet another meeting of foreign ministers of the South Asian Association of Regional Cooperation (SAARC), Pakistan Foreign Minister Shah Mehmood Qureshi raised the issue of Kashmir.

“Highlighted need to condemn & oppose unilateral/illegal measures to change status of disputed territories in violation of UNSC resolutions,” he said.

​India’s External Affairs Minister Subrahmanyam Jaishankar on Thursday called upon SAARC member states to “collectively resolve to defeat the scourge of terrorism, including the forces that nurture, support and encourage an environment of terror and conflict”.

Veronica Ekelund of the European Foundation for South Asian Studies asked the United Nations Human Rights Council, why Pakistan continues to be a member, after Prime Minister Imran Khan himself admitted the presence of terrorists in his country?

​Both India and Pakistan claim Kashmir as their territory, but only rule in parts. Both the countries also fought two full-fledged wars and a limited one over the territory since partition which happened at the same time the countries got their independence from Britain in 1947.