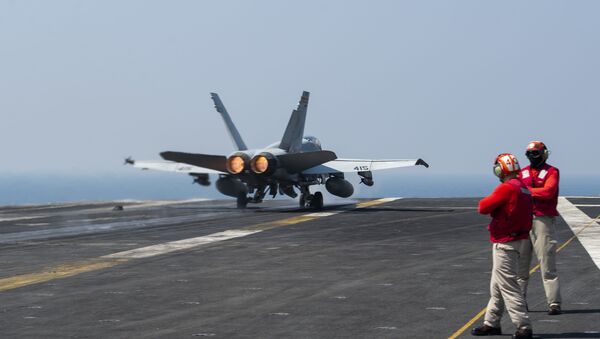 Morgan Artyukhina
All materialsWrite to the author
Iran’s Islamic Revolutionary Guard Corps (IRGC) has released several close-up photos of the US Navy’s aircraft carrier USS Nimitz and ships from its strike group, which entered the Persian Gulf last week.

According to Iran’s Tasnim News Agency, which published the IRGC’s photos on Wednesday, the overflight occurred before the Nimitz transited the Strait of Hormuz. According to the US Navy, the 100,000-ton warship, along with two guided-missile cruisers and a guided-missile destroyer, passed through the waterway and entered the Persian Gulf on September 18.

#IRGC released aerial surveillance images of the #US aircraft carrier USS Nimitz in #PersianGulf waters saying all movements of the American fleet are being monitored by IRGC navy drones pic.twitter.com/KaaRkzR076

​The photos show zoomed-in images of the Nimitz’s flight deck, which is replete with F/A-18 Hornets, as well as at least one E-2 Hawkeye airborne early warning aircraft and one SH-60 Seahawk helicopter, which can be used for anything from submarine hunting to search and rescue operations. The USS Nimitz is the Navy’s oldest carrier still in service, having been commissioned in 1975 as the first of the Nimitz-class ships.

When Military Times asked the Navy about the incident, Cmdr. Rebecca Rebarich, a spokeswoman for US Naval Forces Central Command, told the publication, “There have been no unsafe or unprofessional interactions with the Iranians since April 15.”

That was the day that nearly a dozen IRGC speedboats zipped in close circles around several US warships at the northern end of the Persian Gulf, with video and photos of the incident published by the IRGC afterward. US President Donald Trump then ordered US warships to “shoot down and destroy any and all Iranian gunboats if they harass our ships at sea.”

Tehran goes to great lengths to make US warships feel unwelcome in the Persian Gulf, including not only speedboat harassment, but also drone flybys like those published on Wednesday. In January 2016, August 2017 and April 2019, Iranian drones were either spotted flying close to US aircraft carriers or filmed footage of them doing so and then had it published. The IRGC has even gone so far as to build a mockup of the USS Nimitz, which it periodically uses for target practice.