© REUTERS / Terray Sylvester
Subscribe
International
India
Africa
Ekaterina Blinova
All materialsWrite to the author
US public support for the Black Lives Matter has slid 12 percentage points since June; the total number of people endorsing the movement is now slightly above 50 percent, according to Pew Research Centre. US academics have outlined possible reasons behind the slump in approval, predicting what may happen to BLM after the November vote.

The number of American adults who express sympathy with the movement has plummeted from 67% to 55% since June, when nationwide demonstrations triggered by the death of George Floyd in police custody were gaining pace. Likewise, the share of those who "strongly support" Black Lives Matter has also shrunk from 38% to 29%.

While the decline is particularly notable among White and Hispanic respondents, nonpartisan American think tank Pew Research Centre admits that the share of African American adults expressing "strong support" for the movement has slid 9 points, from 71% to 62%. At the same time, about 87% of Black Americans still generally endorse the Black Lives Matter endeavour.

BLM Protest Was Hijacked at Some Point

The movement that gained momentum in late May prompted a worldwide outburst against the killing of unarmed black people by the police, points out Shirley Jackson, a sociology and Black Studies professor at Portland State University.

"Early protests that involved people of all races, ages, and social groups appeared to have an impact on spotlighting a movement that began long before the killing of George Floyd on May 25th, 2020," she emphasises. "This is likely due to the perfect storm of the stay-at-home mandates of COVID-19, anger at the state of the economy as a result of COVID-19, but also the feeling among those who had in large part ignored the BLM movement for so long, that the time was ripe for action."

However, on 30 May mass media reported about fierce clashes between protesters and the police which quickly spread across the US. Demonstrators called for the defunding and even dismantling of the police, which prompted action in a number of blue cities and states and triggered a pushback from the law enforcement community. Acting on their demands, rioters in Seattle and New York City founded the so-called Capitol Hill Autonomous Zones (CHAZ) ousting police forces from those areas. These moves led to an upsurge of violence and a shooting spree in the city districts occupied by demonstrators.

Antifa has erected a mountain of barricades surrounding New York City's city hall. It's their new City Hall Autonomous Zone, or CHAZ. No, they aren't great with names. pic.twitter.com/7GXeuisR7R

​Those pushing ahead with a violent anti-government narrative in Portland, Oregon and some other cities started dominating the scene, with Antifa leftist activists fanning the flames of the unrest, the academic observes, suggesting that "it was some of these activists who changed the direction of what had been protests about Black Lives Matter".

It is not surprising that support for the Black Lives Matter movement has decreased over the last few months, according to Jackson, because the waters of what had once appeared as a legitimate cause "have been muddied by those who were never protesting in support of Black Lives Matter, but who nonetheless, by their actions, changed the perception of the movement and what it set out to accomplish."

A Pew Research Center study, conducted between 31 August and 7 September, indicated that Americans have heard more about clashes between police and protesters than other recent news stories: around 78% US adults note that they have heard or read a lot about ongoing confrontations. BLM Violent Tactics Are to Blame for Declining Support

"While the mainstream media has been determined to portray BLM activists as 'peaceful protesters', images of carnage in American cities belie these claims. Indeed, the phrase 'peaceful protesters' has become a running joke – and the credibility of the pro-BLM media sinks ever lower," he says. "Declining support for the BLM movement is a natural outgrowth of its radicalism and the violent and aggressive tactics of its members."

Thus, on 24 June, Greater New York Black Lives Matter president Hawk Newsome made a controversial statement while being interviewed by "The Story" host Martha MacCallum. "If this country doesn't give us what we want, then we will burn down this system and replace it. All right? And I could be speaking ... figuratively. I could be speaking literally. It's a matter of interpretation."

The next day, the Black Lives Matter Global Network Foundation, established by Patrisse Cullors, Alicia Garza, and Opal Tometi, who run the BLM website, rushed to distance themselves from Newsome, saying that their entity has no relation to the African American activist. Nevertheless, the BLMGNF itself came into the cross-hairs of conservative observers, who unearthed a video that featured Patrisse Cullors saying that she and her fellow organisers are "trained Marxists". In addition, reports emerged questioning the BLMGNF fundraising activities and spending priorities.

The trigger point for the nationwide protest movement against police brutality also raises questions, according to Waddy: "There has never been any evidence that the police officers in any of the infamous incidents of 2020, including the death of George Floyd, were motivated by racial animus. None. The media doesn't care." Besides this, most Americans were unaware of George Floyd’s background, which included a violent criminal history, when the protests started. 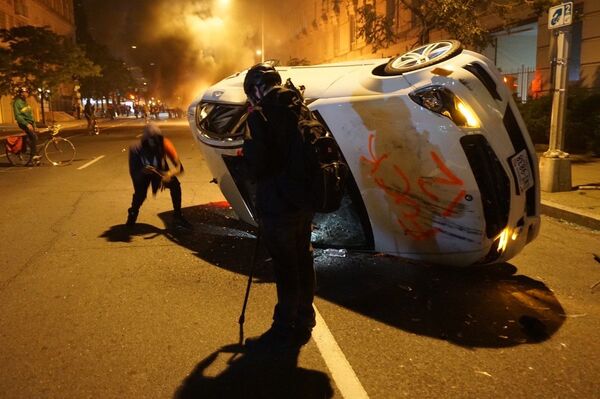 'Both Parties Will Eventually Disown the Hotheads in BLM'

The future of the Black Lives Matter movement is largely dependent upon the outcome of the November elections, Shirley Jackson contends. According to her, if Democratic presidential nominee Joe Biden and his running mate Kamala Harris come out on top, one can expect that the movement will receive political support.

In contrast, if Donald Trump is re-elected, "there is the real possibility for things to get worse for not only the BLM movement but for any left-wing movement," Jackson notes, citing potential federal law enforcement involvement in Democratic strongholds Oregon and Portland, and the president's defunding of "blue" cities.

On Monday, the Justice Department announced it had identified three American cities – New York City, Seattle and Portland – which are now at risk of losing federal funding since they had "permitted violence and destruction of property". The DoJ also cited an uptick in crime, cuts to police departments' budgets and the rejection of federal assistance to tackle with the protests as part of the rationale behind targeting the three cities.

However, the truth is that whether Biden or Trump prevails in 2020, both parties will eventually disown the hotheads in BLM, Nicholas Waddy emphasises.

According to him, left-leaning mass media and Democratic politicians endorsed the movement and overlooked violence which accompanied the protests "because they anticipate that anger and fear amongst people of colour will help to elect Joe Biden in November".

Once winning the White House, the Democrats, who are currently supportive and fearful of BLM, will try to disassociate themselves from the movement's ardent activists, he foresees, adding that if the GOP retains the Oval Office it will ditch the activists once BLM's public approval, as measured in the polls, sinks a little lower.

"I predict that BLM will fade into insignificance by 2021," Waddy concludes.