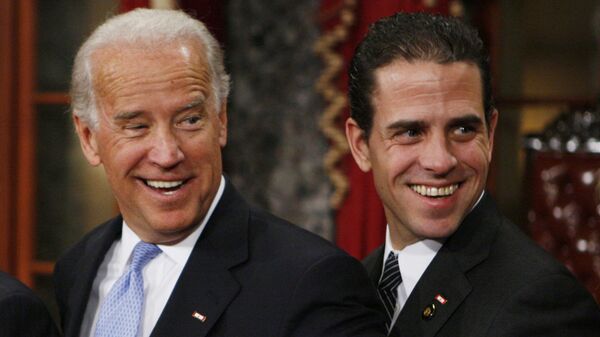 Oleg Burunov
All materialsWrite to the author
US President Donald Trump has repeatedly accused Democratic presidential candidate Joe Biden and his son of engaging in corruption in Ukraine during the administration of US President Barack Obama, allegations that the Dem presidential hopeful rejects.

Senate Republicans have issued a report lashing out at former vice president and current Democratic presidential hopeful Joe Biden's son, Hunter Biden, over his role on the board of a Ukrainian energy company, during the Obama administration.

The report suggests that Hunter Biden's position on the board of the Burisma company was “awkward” and “problematic”, and allegedly interfered with “efficient execution of policy”.

At the same time, the document claims that it was ultimately “unclear” what, if any, impact Hunter Biden’s position in Burisma might have had on Obama administration policy with regard to Ukraine.

Biden’s campaign was quick to reject the report as another attempt by Trump allies to damage the image of the Democratic presidential nominee.

The developments followed the Ukrainian News media outlet citing unnamed sources on Tuesday claiming that Ukrainian investigators had interrogated the country’s former prosecutor-general, Viktor Shokin, as part of a probe into allegations that Joe Biden meddled in his work, which finally led to Shokin's resignation in 2016.

The purported Biden-Shokin standoff allegations come amid a corruption probe into Hunter Biden, who was on Burisma’s board of directors while his father was in charge of Ukrainian affairs during the Obama administration.

However, after Shokin's dismissal, the investigation procedures into the case were either dropped or transferred to Ukraine’s National Anti-Corruption Bureau. A Ukrainian prosecutor, Konstantin Kulik, said in June that Hunter Biden's firms were no longer involved of the probe.

Trump Says He May Ink Executive Order to Stop Biden From Running in November Election
Shokin-related developments went further in late 2019, when US House Democrats impeached President Donald Trump over abuse of power and a conversation he had with Ukrainian President Volodymyr Zelensky in July of that year.

POTUS was accused of threatening to withhold hundreds of millions of dollars of US military aid to Ukraine if a probe into the Bidens’ alleged corrupted activities in the country was not restarted. Trump denied the accusations, and, although impeached in the House on 5 February, was later allowed by the Republican-controlled Senate to retain his office.