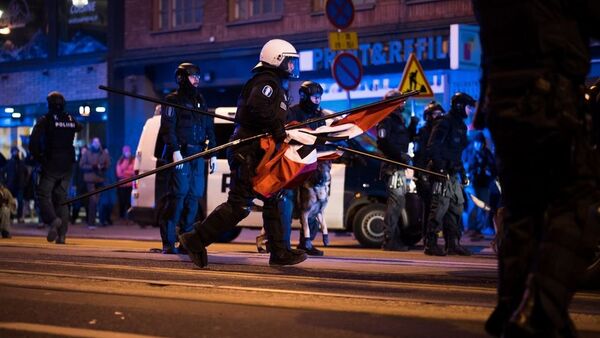 © Photo : Samuli Ikäheimo /twitter
Subscribe
Igor Kuznetsov
All materials
While the Nordic Resistance Movement has been branded neo-Nazi, revolutionary and militant, pundits say the consequences of the ban are uncertain. It was also suggested that the ban may generate an aura of martyrdom about the organisation.

The Finnish Supreme Court has ruled that the Finnish branch of the neo-Nazi Nordic Resistance Movement (NMR) is illegal and should be forbidden. This marks the first time since the 1970s that an organisation has been banned in Finland, national broadcaster Yle reported.

The NMR may no longer organise demonstrations and the association's runic logo and flag may not be used in public. Its subdivisions and related associations will also be dissolved.

Previously, both the Pirkanmaa district court in and the Court of Appeal in Turku decided that the Nordic Resistance Movement should be banned, but it exercised its right to appeal.

In March 2017, the National Police Board filed a lawsuit to completely ban the Nordic Resistance Movement's Finland branch. The police stressed that its activities include spreading hate and propaganda about Jews, immigrants and sexual minorities, and thus are against the law and good practice. Additionally, the NMR reportedly approves of violence. The organisation itself rejected this view and stressed that its activities fully fall within the framework of freedom of expression and association.

Since the 2018 ruling by the Turku Court of Appeal, the organisation has been suspected of breaking the temporary operating ban, among other things, last winter. The authorities suspect that the NMR had also tried to recruit new members under a different name.

Kimmo Nuotio, a professor of criminal law at the University of Helsinki, called the ruling by the Supreme Court a landmark decision and a legal milestone.

“The court emphasised that freedom must not be abused. This opens the door to ban other associations in the future as well,” Kimmo Nuotio stressed to Yle.

Christer Mattson, a researcher of racism and violent extremism and the University of Gothenburg, ventured that while the verdict is important and was expected, its consequences are uncertain. Previously, pundits opined that the ban may generate an aura of martyrdom and lead to a “forbidden fruit” situation.

“The question is whether the decision to ban NMR actually reduces or increases the risks of violence. NMR is a hierarchical organisation that in recent years has been careful not to use public violence”, Mattsson told Yle. “That is, the NMR has not attacked political opponents, but has only adhered to defensive violence. That is, they feel that they have defended themselves. “It is thus not a-given that the situation will improve”, Mattsson mused.

Mattson stressed that violence was much less predictable before the NMR, when there was a mishmash of skinhead groups and neo-Nazis.

The NMR is a pan-Nordic neo-Nazi movement with roots in Sweden. Since the late 1990s, it has mushroomed to find new members in Finland, Norway and Denmark. Its members have reportedly served prison terms for robberies, assault and manslaughter.

According to the Finnish Interior Ministry, the organisation is a “revolutionary and militant movement, whose goal is to create a National Socialist state”. According to Finnish national broadcaster Yle, its allies include National Action in the UK, the Azov Battalion in Ukraine, the Greek neo-Nazi party Golden Dawn, and the Italian neo-Nazi party Casa Pound. Online, many Finnish Nazis reportedly boasted to their peers that they belong to an organisation that is about to be banned.