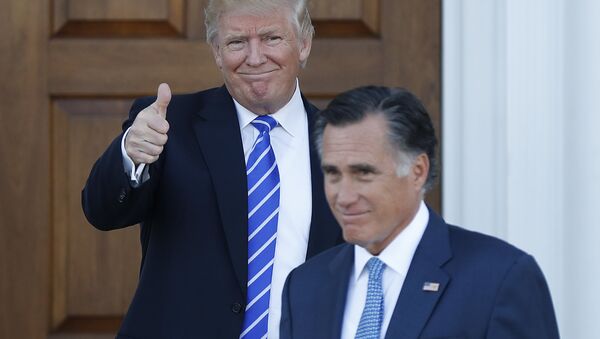 © AP Photo / Carolyn Kaster
Subscribe
International
India
Africa
Max Gorbachev
All materialsWrite to the author
Trump said he would reveal his choice on Friday or Saturday and noted that the new justice will be a woman. Democrats, however, argue that the decision on the new justice should be made after the upcoming presidential election and have even threatened to impeach Trump if the Senate holds a vote on his nominee.

Republicans have firmed up a majority in order to confirm Donald Trump's Supreme Court nominee, who will replace Justice Ruth Bader Ginsburg, who died from pancreatic cancer at the age of 87 last week. Mitt Romney, who is a harsh critic of President Trump, said he would not oppose the vote on Trump’s pick, a move that strengthens the Republicans’ chances to confirm a new conservative justice.

"I intend to follow the Constitution and precedent in considering the President's nominee. If the nominee reaches the Senate floor, I intend to vote based upon their qualifications", Romney said.

Once the president announces the nominee, the Senate can hold a confirmation vote. The Republicans have a 53-47 majority in the Senate. So far, only two Republicans have said they oppose Trump’s decision to appoint a new justice before the election.

The Senate Judiciary Chairman Lindsey Graham said Trump’s nominee is going to be approved. “We've got the votes to confirm the justice on the floor of the Senate before the election and that's what's coming”, Graham told Fox News.

Democrats, led by Speaker of the House of Representatives Nancy Pelosi and presidential candidate Joe Biden, have opposed Trump’s aim to nominate a new justice before the presidential election. The Democrats argue that voters should decide who will be the next president and that the winner of the upcoming election should replace the late Ruth Bader Ginsburg.

Why is the Vote on Trump’s Supreme Court Nominee Important?

Trump has not yet announced his nominee, but it will likely be a conservative. If the new justice is confirmed, it would cement a conservative-leaning majority in the highest court of the United States potentially for decades, as justices serve either until they die or retire. The US Supreme Court rules on some of the most controversial and publicised cases and has the final say in disputes between states and the federal government. For example, in recent years it ruled on gay marriage and Trump's travel ban on Muslim countries.

Announcing his decision to back holding a vote on Trump’s nominee, Mitt Romney stressed that it is not “written in the stars” that Trump’s nominee will make the court more conservative.

It is unclear whether Republicans will manage to confirm the new justice before the election, scheduled for 3 November, as normally the process take two months on average.