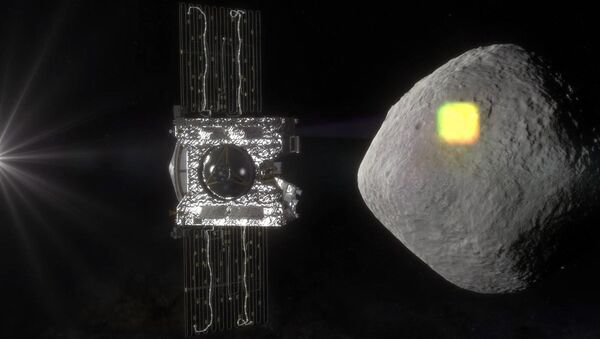 James Tweedie
All materialsWrite to the author
Launched in 2016, The OSIRIS-REx spacecraft is currently mapping the surface of Bennu, the so-called 'doomsday asteroid', formed from fragments of an ancient planetoid destroyed during the formation of the solar system.

NASA has announced the striking discovery of fragments of the solar system's second-largest asteroid on the surface of another asteroid.

On Monday, the US space agency published images captured in 2019 by the OSIRIS-REx spacecraft, showing distinctive light-coloured objects ranging from five to 14 feet wide on the surface of Bennu, a smaller asteroid thought to have been formed billions of of years ago from the remains of a planetoid or proto-planet that was destroyed as the solar system formed.

“We found six boulders ranging in size from 5 to 14 feet (about 1.5 to 4.3 meters) scattered across Bennu’s southern hemisphere and near the equator,” said lead study author Daniella DellaGiustina in a statement. “These boulders are much brighter than the rest of Bennu and match material from Vesta.”

Spectrograph analysis by OSIRIS-REx showed the light-coloured rocks contained the mineral pyroxene, common on Vesta but not otherwise seen on Bennu.

With a mean diameter of 525 kilometres, Vesta is the second-most massive object - after the dwarf planet Ceres - in the asteroid belt, which is between the orbits of Mars and Jupiter. It is over a thousand times broader than Bennu, a 490-metre wide chunk of dark carboniferous material thought to have originated in the hot bowels of a long-since destroyed body.

“Our leading hypothesis is that Bennu inherited this material from its parent asteroid after a vestoid (a fragment from Vesta) struck the parent,” co-author Hannah Kaplan said. “Then, when the parent asteroid was catastrophically disrupted, a portion of its debris accumulated under its own gravity into Bennu, including some of the pyroxene from Vesta.”

NASA said it was not uncommon to find evidence of asteroids colliding with each other, despite being far more distant to each other than Hollywood movies would have you believe.

"Examples include dark material on crater walls seen by the Dawn spacecraft at Vesta, a black boulder seen by the Hayabusa spacecraft on Itokawa, and very recently, material from S-type asteroids observed by Hayabusa2 at Ryugu," the agency said. "This indicates many asteroids are participating in a complex orbital dance that sometimes results in cosmic mashups."

Bennu has been dubbed a high-risk 'apocalypse asteroid' as astronomers calculate that it has a one-in-2,700 chance of hitting Earth some time in the last quarter of the next century.

OSIRIS-REx, launched in 2016, will land on Bennu after mapping its surface, and attempt to return to Earth with at least 60 grams of sample material from the asteroid.