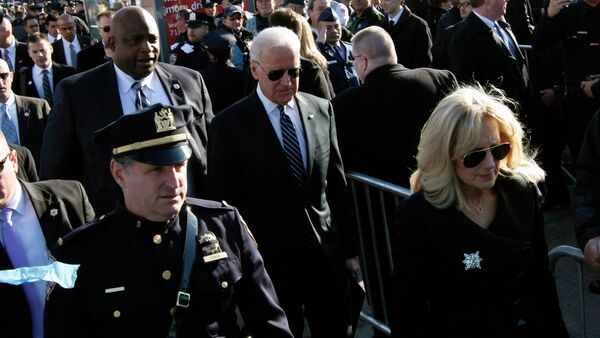 Lilia Dergacheva
All materialsWrite to the author
Bill Stevenson, who is going to publish a book of memoirs some time soon, says his speaking up on his previous marriage and chemistry between Jill and Joe are relevant because the former vice president “is picking on people about character”.

Jill Biden’s ex-husband has complained about having been “betrayed by the Bidens”, telling Inside Edition that he was still married to Jill when she met Joe, thereby denying the much chewed over fairy tale story of the Bidens’ first meeting on a blind date after Jill’s divorce.

When asked if the blind date story was true, 72-year-old Bill Stevenson, who is reportedly about to publish an as yet-untitled book about their marriage with Jill, responded: “No, not even a little bit.”

Stevenson, who ran the famed rock venue The Stone Balloon in Wilmington, Delaware in the 1970s, detailed that it was he who introduced Jill and Joe, a council member running for the US Senate and married to his first wife Neilia at the time, in 1972.

“Jill, Joe, Neilia and I were in his kitchen. How do you forget that?” Stevenson queried.

Neilia Biden, mother of Joe's two sons Beau and Hunter, and daughter Naomi, would die along with one-year-old Naomi four months later, in a car crash in December 1972.

Who Is Jill Biden? From Teacher-Turned-Second Lady to Potential First One

Stevenson said he first suspected 23-year-old Jill and Biden, eight years older than her, were having an affair in August 1974.

“Then one of her best friends told me she thought Joe and Jill were getting a little too close. I was surprised that she came to me,” Stevenson recalled.

Jill’s first husband claimed that despite happening years ago, the episodes he recalled are relevant at this point in time, as well.

“It's years ago, but guess what - it's so current right now. Because he is picking on people about character,” commented Stevenson, stressing though he has never had any hard feelings about “Joe, Jill, the affair.”

“But if I don't do it now, it's never going to be able to be brought up,” he went on. In October 1974, he said he didn’t already have any doubts that Jill was indeed having an extramarital affair. To prove the point, he went on to recount an accident with their family car, a brown Corvette. After a crash involving it, he asked the man who informed him about the traffic accident for details, and heard from him that it wasn’t Jill who was driving, but Senator Biden.

Stevenson said he voted for Barack Obama, but is now set to vote red, for Donald Trump, in November, because he supports his stance on backing the police.

“These claims are fictitious, seemingly to sell and promote a book. The relationship of Joe and Jill Biden is well documented.”

Jill and Joe say that they did not meet until March 1975, when Jill’s divorce was nearly finalised and Joe was still recovering from the loss of his first wife and little daughter in a car crash in late 1972.